Is there a new bubble in Silicon Valley?

Instagram Founders Were Helped by Bay Area Connections. Internet start-ups: Another bubble? Pacing Yourself. I've been pretty clear as of late that I think the market for investing in web startups is getting overheated. 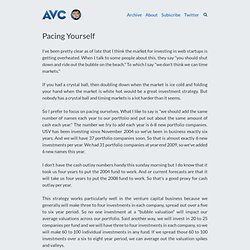 When I talk to some people about this, they say "you should shut down and ride out the bubble on the beach. " To which I say "we don't think we can time markets. " If you had a crystal ball, then doubling down when the market is ice cold and folding your hand when the market is white hot would be a great investment strategy. But nobody has a crystal ball and timing markets is a lot harder than it seems. So I prefer to focus on pacing ourselves. I don't have the cash outlay numbers handy this sunday morning but I do know that it took us four years to put the 2004 fund to work. This strategy works particularly well in the venture capital business because we generally will make three to four investments in each company, spread out over a five to six year period. Storm Clouds. We have enjoyed an amazing run in the web startup and investing space over the past five or six years. 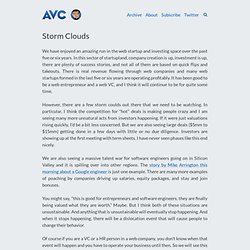 In this sector of startupland, company creation is up, investment is up, there are plenty of success stories, and not all of them are based on quick flips and takeouts. There is real revenue flowing through web companies and many web startups formed in the last five or six years are operating profitably. Irrationality, Welcome Back to Silicon Valley: Tech News « Wow, finally people noticed. 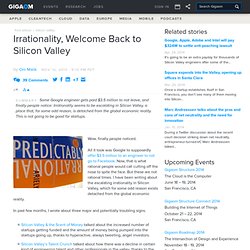 All it took was Google to supposedly offer $3.5 million to an engineer to not go to Facebook. Now, that is what rational people would call cutting off the nose to spite the face. But these are not rational times. I have been writing about the escalating irrationality in Silicon Valley, which for some odd reason exists detached from the global economic reality. In past few months, I wrote about three major and potentially troubling signs. Silicon Valley & the Scent of Money talked about the increased number of startups getting funded and the amount of money being pumped into the startups going up, thanks to hyperactive, always tweeting, angel investors.Silicon Valley’s Talent Crunch talked about how there was a decline in certain kind of engineering talent and other professionals in the valley, thanks to the breathless hiring from giants like Zynga, Google, Apple, Facebook and Twitter.The media’s focus on investors and not the founders.

There is No Angel Bubble. There are Many Angel Bubbles. A common meme floating around right now is that there is an Angel investing bubble. 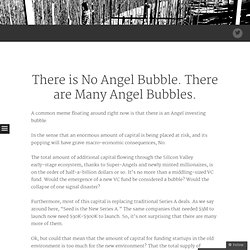 In the sense that an enormous amount of capital is being placed at risk, and its popping will have grave macro-economic consequences, No. The total amount of additional capital flowing through the Silicon Valley early-stage ecosystem, thanks to Super-Angels and newly minted millionaires, is on the order of half-a-billion dollars or so.

Yes, The Angel Financing Market Is A Massive Bubble. [Note: This was sent to the www.JasonNation.com e-mail newsletter. 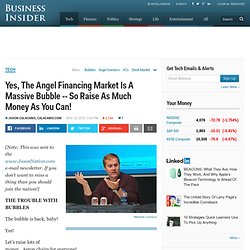 If you don't want to miss a thing than you should join the nation!] The bubble is back, baby! Yes! Let’s raise lots of money…Aeron chairs for everyone! Oh wait, I’m angel investing now...higher valuations means I get a smaller percentage! Boooooo! Bubbles are bad! Bad bubble, bad bubble! What Angel Investing & Florida Condos Have in Common. Chris dixon: Re: supposed tech/VC bubbl... NO, according to fundamentals.

Bubble or bust? Nobody knows anything. Increasing Series A financing risk for software/Web startups. . 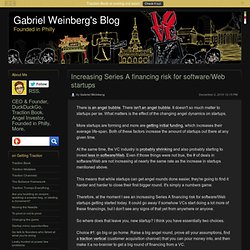 There . It doesn't so much matter to startups per se. What matters is the effect of the changing angel dynamics on startups. More startups are forming and more are getting initial funding, which increases their average life-span. Both of these factors increase the amount of startups out there at any given time. At the same time, the VC industry is probably shrinking and also probably starting to invest less in software/Web.

This means that while startups can get angel rounds done easier, they're going to find it harder and harder to close their first bigger round. Therefore, at the moment I see an increasing Series A financing risk for software/Web startups getting started today. So where does that leave you, new startup? Choice #1: go big or go home. What Percentage of 2010 Seed Deals Won’t Raise The Next Round? There have been a number of thoughtful “early warning sign” posts in the past few days including one from Fred Wilson (Storm Clouds), one from Mark Suster (What Angel Investing & Florida Condos Have in Common), and Roger Ehrenberg (Investing in a frenzied market). 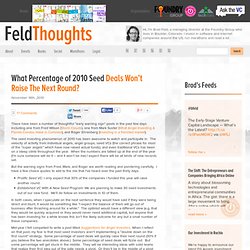 The seed investing phenomenon of 2010 has been awesome to watch and participate in. The velocity of activity from individual angels, angel groups, seed VCs (the correct phrase for most of the “super angels” which have now raised actual funds), and even traditional VCs has been on a steep climb throughout the year. ﻿ Dotcom bubble 2.0 - 2011, the next dotcom bust?