Vajra-mushti. Vajra-musti (Sanskrit:वज्रमुष्टि, "thunder fist" or "diamond fist") refers to a knuckleduster-like weapon and also a form of Indian wrestling in which the weapon is employed. 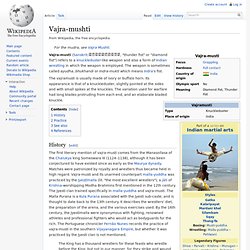 Thang-Ta. Thang-ta is a weapon-based Indian martial art created by the Meitei of Manipur.[1] In the Manipuri language, thang means sword and ta means spear, referring to the art's primary weapons. 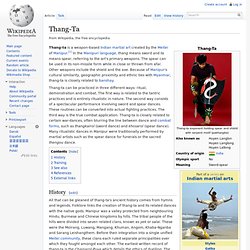 The spear can be used in its non-missile form while in close or thrown from afar. Other weapons include the shield and the axe. Because of Manipur's cultural similarity, geographic proximity and ethnic ties with Myanmar, thang-ta is closely related to banshay. Thang-ta can be practiced in three different ways: ritual, demonstration and combat.

Silambam. Silambam (Tamil: சிலம்பம்) or silambattam (சிலம்பாட்டம்) is a weapon-based Indian martial art from Tamil Nadu, but also traditionally practised by the Tamil community of Sri Lanka and Malaysia. 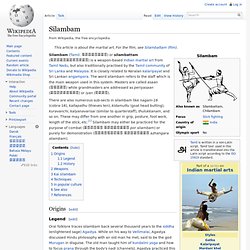 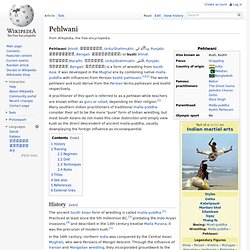 It was developed in the Mughal era by combining native malla-yuddha with influences from Persian koshti pahlavani.[1][2] The words pehlwani and kusti derive from the Persian terms pahlavani and koshti respectively. A practitioner of this sport is referred to as a pehlwan while teachers are known either as guru or ustad, depending on their religion.[2] Many southern Indian practitioners of traditional malla-yuddha consider their art to be the more "pure" form of Indian wrestling, but most South Asians do not make this clear distinction and simply view kusti as the direct descendent of ancient malla-yuddha, usually downplaying the foreign influence as inconsequential. History[edit] Kushti match in Bharatpur, 2013. Training[edit] Mukna. Musti-yuddha. Musti-yuddha is the traditional South Asian form of boxing.[1] The term literally means "fist combat", from the Sanskrit words muśti (fist) and yuddha (fight, battle, conflict). 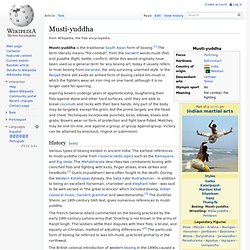 While this would originally have been used as a general term for any boxing art, today it usually refers to muki boxing from Varanasi, the only surviving unarmed style. In the Panjab there still exists an armed form of boxing called loh-musti in which the fighters wear an iron ring on one hand, although it is no longer used for sparring. Aspiring boxers undergo years of apprenticeship, toughening their fists against stone and other hard surfaces, until they are able to break coconuts and rocks with their bare hands. Mardani khel. History[edit] The early history of mardani khel as a distinct system is difficult to trace prior to the 1600s, but it is said to owe its development to the particular geographic conditions of Maharashtra. 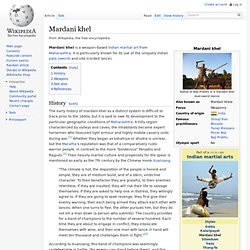 A hilly region characterized by valleys and caves, the inhabitants became expert horsemen who favoured light armour and highly mobile cavalry units during war.[1] Whether they began as kshatriya or shudra is unclear, but the Maratha's reputation was that of a comparatively rustic warrior people, in contrast to the more "boisterous" Panjabis and Rajputs.[2] Their heavily martial culture and propensity for the spear is mentioned as early as the 7th century by the Chinese monk Xuanzang.

"The climate is hot, the disposition of the people is honest and simple, they are of medium build, and of a stern, vindictive character. To their benefactor they are grateful, to their enemies relentless. If they are insulted, they will risk their life to salvage themselves. Weapons[edit] Marathi weapons. Malla-yuddha. Malla-yuddha (Devanagari: मल्लयुद्ध,[1] Tamil:மல்யுத்தம் malyutham, Telugu: మల్ల యుద్ధం, Kannada: ಮಲ್ಲಯುದ್ಧ, Bengali: মল্লযুদ্ধ) is the traditional South Asian form of combat-wrestling[2] created in what is now India, Pakistan, Bangladesh and Sri Lanka. 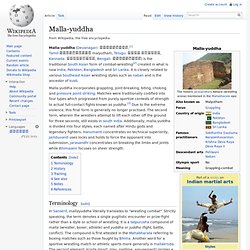 It is closely related to various Southeast Asian wrestling styles such as naban and is the ancestor of kusti. Malla-yuddha incorporates grappling, joint-breaking, biting, choking and pressure point striking. Matches were traditionally codified into four types which progressed from purely sportive contests of strength to actual full-contact fights known as yuddha.[3] Due to the extreme violence, this final form is generally no longer practised. 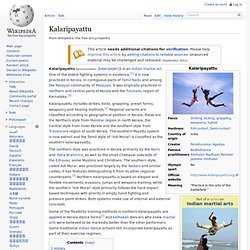 One of the oldest fighting systems in existence,[1] it is now practiced in Kerala, in contiguous parts of Tamil Nadu and among the Malayali community of Malaysia. It was originally practiced in northern and central parts of Kerala and the Tulunadu region of Karnataka.[2] Kalaripayattu includes strikes, kicks, grappling, preset forms, weaponry and healing methods.[2] Regional variants are classified according to geographical position in Kerala; these are the Northern style from Malabar region in north Kerala, the Central style from inner Kerala and the southern style from Travancore region of south Kerala. Inbuan wrestling. Inbuan is a form of wrestling native to the people of Mizoram in India. 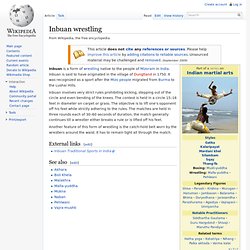 Inbuan is said to have originated in the village of Dungtland in 1750. It was recognized as a sport after the Mizo people migrated from Burma to the Lushai Hills. Inbuan involves very strict rules prohibiting kicking, stepping out of the circle and even bending of the knees. The contest is held in a circle 15–16 feet in diameter on carpet or grass. The objective is to lift one's opponent off his feet while strictly adhering to the rules. Gatka. Gatka (Punjabi: ਗਤਕਾ gatkā) is a traditional South Asian form of combat-training in which wooden sticks are used to simulate swords in sparring matches.[1] In modern usage, it commonly refers to the northern Indian martial arts, which should more properly be called shastar vidiyā (ਸ਼ਸਤਰ ਵਿਦਿਆ, from Sanskrit sastra-vidya or "knowledge of the sword"). 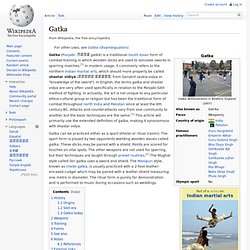 In English, the terms gatka and shastar vidya are very often used specifically in relation to the Panjabi-Sikh method of fighting. In actuality, the art is not unique to any particular ethno-cultural group or religion but has been the traditional form of combat throughout north India and Pakistan since at least the 6th century BC. Attacks and counterattacks vary from one community to another but the basic techniques are the same.[1] This article will primarily use the extended definition of gatka, making it synonomous with shastar vidya. Gatka can be practiced either as a sport (khela) or ritual (rasmi). History[edit] Origins[edit] Forms[edit]