GE’s New “Flexible” Factory in India is Changing... When people talk about the future of manufacturing, they usually have Germany, Japan and the United States in mind, not India. 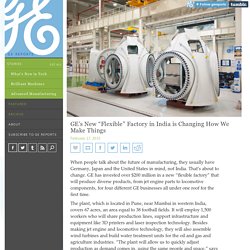 That’s about to change. GE has invested over $200 million in a new “flexible factory” that will produce diverse products, from jet engine parts to locomotive components, for four different GE businesses all under one roof for the first time. The plant, which is located in Pune, near Mumbai in western India, covers 67 acres, an area equal to 38 football fields.

It will employ 1,500 workers who will share production lines, support infrastructure and equipment like 3D printers and laser inspection technology. Besides making jet engine and locomotive technology, they will also assemble wind turbines and build water treatment units for the oil and gas and agriculture industries. PM launches ‘Make in India’ global initiative. The Prime Minister, Shri Narendra Modi, today launched the Make in India initiative with an aim to give the Indian economy global recognition. 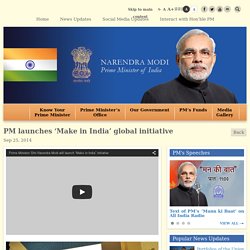 Addressing a gathering consisting of top global CEOs at the event in Vigyan Bhawan in the capital, the Prime Minister said “FDI” should be understood as “First Develop India” along with “Foreign Direct Investment.” He urged investors not to look at India merely as a market, but instead see it as an opportunity. The Prime Minister said it is important for the purchasing power of the common man to increase, as this would further boost demand, and hence spur development, in addition to benefiting investors. The faster people are pulled out of poverty and brought into the middle class, the more opportunity will there be for global business, the Prime Minister said. 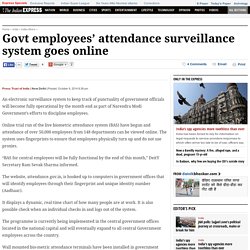 Online trial run of the live biometric attendance system (BAS) have begun and attendance of over 50,000 employees from 148 departments can be viewed online. The system uses fingerprints to ensure that employees physically turn up and do not use proxies. “BAS for central employees will be fully functional by the end of this month,” DeitY Secretary Ram Sevak Sharma informed. Maximum mistrust. Our society is gripped by two overlapping tendencies. 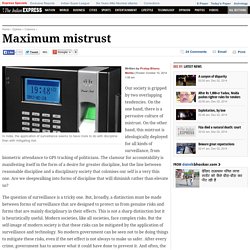 On the one hand, there is a pervasive culture of mistrust. On the other hand, this mistrust is ideologically deployed for all kinds of surveillance, from biometric attendance to GPS tracking of politicians. The clamour for accountability is manifesting itself in the form of a desire for greater discipline, but the line between reasonable discipline and a disciplinary society that colonises our self is a very thin one. India's Asia-Pacific Policy: From "Look East" to "Act East" GIFT City: India’s First International Smart City In Gujarat. When BJP released it’s election manifesto, they had promised to build 100 smart cities in India. 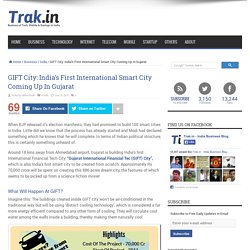 Little did we know that the process has already started and Modi had declared something which he knows that he will complete. In terms of Indian political structure, this is certainly something unheard of. Around 18 kms away from Ahmedabad airport, Gujarat is building India’s first International Financial Tech City: “Gujarat International Financial Tec (GIFT) City”, which is also India’s first smart city to be created from scratch. Approximately Rs 70,000 crore will be spent on creating this 886 acres dream city, the features of which seems to be picked up from a science fiction movie! What Will Happen At GIFT? Imagine this: The buildings created inside GIFT city won’t be air-conditioned in the traditional way but will be using ‘district cooling technology’, which is considered a far more energy efficient compared to any other form of cooling. How Big Is GIFT? 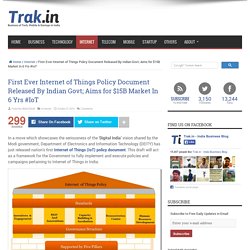 This draft will act as a framework for the Government to fully implement and execute policies and campaigns pertaining to Internet of Things in India. This policy document related with IoT framework is part of the broader ‘Digital India’ vision shared by the Modi government immediately after it came to power.

A budget of Rs 1 lakh crore has already sanctioned to implement all the future plans under this vision. As per this policy document, the government envisions to create a market worth $15 billion (Rs 90,000 crore) by 2020. India's biometric ID project is back on track. The new Indian government has indicated strong support for a controversial project to require residents to have biometric IDs in order to collect government benefits, setting a target of 1 billion enrollments by 2015. 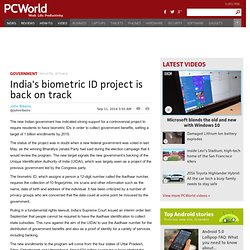 The status of the project was in doubt when a new federal government was voted in last May, as the winning Bharatiya Janata Party had said during the election campaign that it would review the program. The new target signals the new government’s backing of the Unique Identification Authority of India (UIDAI), which was largely seen as a project of the previous government led by the Congress party. The biometric ID, which assigns a person a 12-digit number called the Aadhaar number, requires the collection of 10 fingerprints, iris scans and other information such as the name, date of birth and address of the individual. It has been criticized by a number of privacy groups who are concerned that the data could at some point be misused by the government.

Indian PM Narendra Modi meets Obama at White House. 30 September 2014Last updated at 00:26 ET The BBC's Brajesh Upadhyay: "Narendra Modi is exactly the kind of assertive leader who can rebuild this flagging partnership" Indian Prime Minister Narendra Modi has met US President Barack Obama at the White House over dinner, ahead of formal talks on Tuesday. 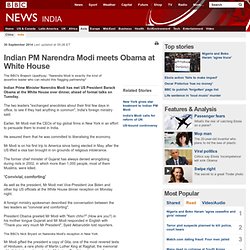 India, America and political theatre: I give you Narendra Modi. “YEAH, go that way,” yells a frazzled cop guarding a security cordon outside Penn Station. 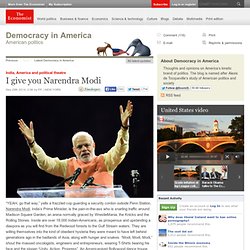 Narendra Modi, India’s Prime Minister, is the pain-in-the-ass who is snarling traffic around Madison Square Garden, an arena normally graced by WrestleMania, the Knicks and the Rolling Stones. Inside are over 18,000 Indian-Americans, as prosperous and upstanding a diaspora as you will find from the Redwood forests to the Gulf Stream waters. They are willing themselves into the kind of obedient hysteria they were meant to have left behind generations ago in the badlands of Asia, along with hunger and snakes. “Modi, Modi, Modi,” shout the massed oncologists, engineers and entrepreneurs, wearing T-Shirts bearing his face and the slogan “Unity, Action, Progress”. An Americanised Bollywood dance troupe wearing fluorescent military uniforms gyrates to Bruce Springsteen’s anthem “Born in the USA”.

At 11.45am precisely, a film shows a fantasy India of robots, billionaires' houses and vast green fields. Obama and Modi must cook up a solution on food subsidies and the WTO. Author: Sourabh Gupta, Samuels International The young Narendra Modi government has not covered itself in glory on the international trade policy front. 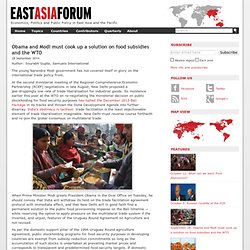 Modi Visit: U.S. and India Must Cooperate for Asian Stability. Indian Prime Minister Narendra Modi’s visit to the United States next week provides an opportunity to strengthen U.S. –India ties, which stagnated during the second term of Modi’s predecessor, Manmohan Singh. During the visit, President Barack Obama should demonstrate the importance the U.S. attaches to the bilateral relationship and offer cooperation on economic, defense, and security issues. The Obama Administration has at times relegated the relationship with India to a lower category of priority than it merits, but both sides have shown interest in moving beyond negative atmospherics and specific irritants, like the revocation of Modi’s U.S. visa over the 2002 Gujarat riots and last year’s arrest of a U.S.

-based Indian diplomat. The visit will be observed closely by other Asian powers: namely, China and Japan, both of which recently held high-level bilateral visits of their own with Modi. Modi Visit: U.S. and India Must Cooperate for Asian Stability. Seizing the Modi Moment: Reenergizing U.S.-India Ties on the Eve of the Prime Minister’s Visit. "India needs to create10-15 million jobs per year", Says the Planning Commission Report on Entrepreneurship. The Indian Planning Commission has released a report on entrepreneurship in India. It is an extensive report covering various aspects of the Indian ecosystem including its role in shaping India’s future and the key gaps faced by entrepreneurs in India.

The Committee has made extensive recommendations that are relevant to a number of stakeholders both within the Governmental and Regulatory fold and those outside their immediate purview. The Committee believes however, that to build a vibrant entrepreneurial ecosystem leading to significant employment and wealth creation in the country, there has to be a sustained and continuous focus on the simultaneous and coordinated implementation of these measures. India looks east: A strenuous September. India is not the bad guy, but it can do better. Author: Rajiv Kumar, Senior Fellow, Centre for Policy Research India’s recent veto of the WTO Trade Facilitation Agreement (TFA), agreed at the Bali Ministerial last year, raises several points that speak to its commitment to the multilateral system, the need for agricultural reform and India’s place in the world. First, multilateral trade negotiations have always been and continue to be an inherent component of global realpolitik.

Modi, India’s Next Prime Minister, Adopts a Softer Tone. Continue reading the main story Video. Did Obama Wait Too Long to Engage Narendra Modi? Eeny, Meeny, Miney, Modi. India’s path from poverty to empowerment. India has made encouraging progress by halving its official poverty rate, from 45 percent of the population in 1994 to 22 percent in 2012. This is an achievement to be celebrated—yet it also gives the nation an opportunity to set higher aspirations. Modi’s roadmap for India’s Kashmir and Pakistan policies. A way out of the slums in India. Author: Anirudh Krishna, Duke University Social mobility is low in India compared to other countries: income and wealth inequalities are high and rising; the chances that a child, not born to privilege, will become wealthy remain low. Slum-born millionaires are the stuff of myths and movies.

Few people born into poverty in India, no matter how smart or hard working, have had success finding high-level employment. Individuals whose parents were poor tend to remain poor in later life, according to a recent study. The study interviewed more than 2,000 new entrants to a variety of engineering colleges, business schools and civil services, each a highly sought after destination among India’s youth. GEO - STRATEGIC IMPORTANCE OF SOUTH ASIA.