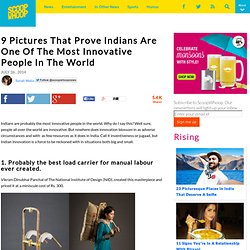 Why do I say this? Well sure, people all over the world are innovative. SID2007 Bamboo&Design. S. S-1. Design for India. Design Thinking at Ahmedabad University: A new beginning for Indian education. Design Thinking at Ahmedabad University: An approach paper for a proposed course for undergraduate students Ahmedabad August 2013 Why Design Thinking? We have constantly been amazed at the great creative actions of humanity, which can be seen in their key inventions and major evolutionary steps that shaped human civilisation and these have been initiated by generations of unknown creators over time immemorial. These creators have helped shape our civilisation through their breakthrough contributions by daring to experiment and create in the face of social isolation and ridicule by the prevailing orthodoxy. We now know that these are early design acts that were not properly attributed in our historic references so far.

University education has become dominated by vertical specialisations with little connect between the various disciplines and the emphasis has been on development of knowledge resources and capability within each domain of study. 1. 2. 3. 4. 5. 6. 7. Prof M P Ranjan 1. 2. 3. India's Next Global Export: Innovation. Q&A: Why the West Needs ‘Jugaad’ Creativity - India Real Time. How Companies Can Foster Innovation. Why Jugaad might make sense to the rest of the world, but not to India. 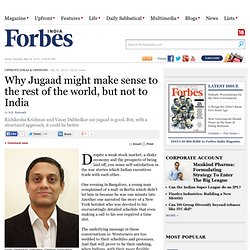 But, with a structured approach, it could be better espite a weak stock market, a shaky economy and the prospects of being laid off, you sense self-satisfaction in the war stories which Indian executives trade with each other. India can't be a Jugaad Economy Forever. India has to implement key reforms in at least three areas—energy, land and labour—to get its economy back on track. 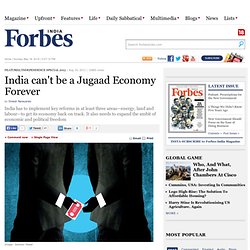 Profit In the Era of Scarcity. Ou've probably heard about Mitticool, the clay refrigerator from Gujarat, and Revolo, the plug-in system from KPIT Cummins that gives the benefits of a hybrid car. 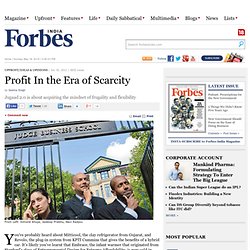 It’s likely you’ve learnt that Embrace, the infant warmer that originated from Stanford’s class of Entrepreneurial Design for Extreme Affordability, is now sold in India and elsewhere for one hundredth of the cost of incubators sold in Western markets. It’s also likely that you may have ranked these as low-cost solutions that smack more of improvisation than patent-toting innovation that modern businesses have built their edifices on. In that case, you’re probably missing the point that the authors of Jugaad Innovation are making through a raft of well-executed ideas, from Brazil to China, from Argentina to India.

As the era of scarcity, of economic and natural resources, is upon us, the old structured way of innovation needs to be propped up by a new flexible, frugal model. Indian companies can draw lessons from two books that celebrate frugal innovation. A vehicle assembled with a water pump as its prime mover Jugaad Innovation: A Frugal and Flexible Approach to Innovation for the 21st Century By Navi Radjou, Jaideep Prabhu & Simone Ahuja Jossey-BassPages: 317, Price: Rs 499 Reverse Innovation: Create Far from Home, Win Everywhere ByVijay Govindarajan & Chris Trimble Harvard Business Review PressPages: 229Price: Rs 750 Have you ever wondered why there are not too many Indian multinational companies (MNCS)? 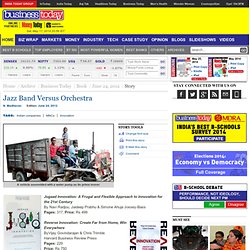 Jugaad: A Frugal, Flexible Approach to Innovation. In Jugaad Innovation: Think Frugal, Be Flexible, Generate Breakthrough Growth, authors Navi Radjou, Jaideep Prabhu and Simone Ahuja present a new approach to innovation that is fueling growth in emerging markets as well as developed ones. 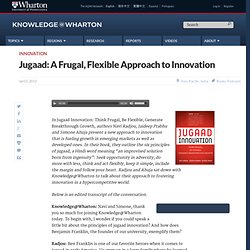 In their book, they outline the six principles of jugaad, a Hindi word meaning “an improvised solution born from ingenuity”: Seek opportunity in adversity, do more with less, think and act flexibly, keep it simple, include the margin and follow your heart. Radjou and Ahuja sat down with Knowledge@Wharton to talk about their approach to fostering innovation in a hypercompetitive world. Below is an edited transcript of the conversation. Knowledge@Wharton: Navi and Simone, thank you so much for joining Knowledge@Wharton today. Boston Public Radio. May 18, 2014 Updated: 9:05 AM Get free updates |About WGBH Forgot password News Food & Wine Home & Travel Classical Music Arts Kids Science History Thurs. 7/12/12 Indian Ingenuity Boston Public Radio. 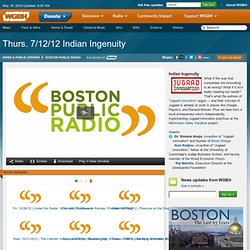 Frugal innovation: the lessons of India's 'jugaad' A new book titled Jugaad Innovation looks at lessons from emerging markets in frugal innovation for multinational corporations. Here's our chat with co-author Simone Ahuja, one of the three authors on this project (along with Navi Radjou and Jaideep Prabhu). Skip to next paragraph Dowser.org reports on the practical and human elements of social innovation, highlighting creative approaches to social change to help people understand how to build better communities and a better world. Recent posts Subscribe Today to the Monitor. Why Carlos Ghosn is fond of &#8216;jugaad&#8217; Updated: Thu, Aug 02 2012. 10 04 PM IST New Delhi: Carlos Ghosn wants to take back more than just entry-level cars from India. 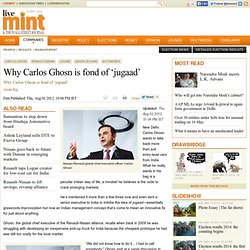 What he really wants in his bag is a peculiar Indian way of life, a mindset he believes is the code to crack emerging markets. He’s mentioned it more than a few times now and even sent a senior executive to India to imbibe the idea of jugaad—essentially grassroots improvization but now an Indian management concept that’s come to mean an innovative fix for just about anything.

Ghosn, the global chief executive of the Renault-Nissan alliance, recalls when back in 2009 he was struggling with developing an inexpensive pick-up truck for India because the cheapest prototype he had was still too costly for the local market. Nissan-Renault global chief executive officer Carlos Ghosn “We did not know how to do it... Ghosn called V. “Look, we want to bring in a product in pick-up truck, which is a large segment. Grassroots innovation The Nano case study. Madhukar Sabnavis: Jugaad - Maximum for minimum. I remember a famous Fevicol commercial, showing a bus ambling along with people precariously perched inside it and above it — an oft-seen sight in semi-urban and rural India. 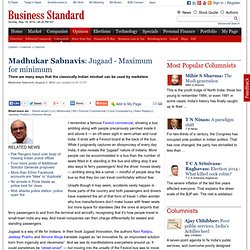 It ends with a Fevicol board at the back of the bus. While it poignantly captures an idiosyncrasy of every day India, it also reveals the “jugaad” nature of Indians: More people can be accommodated in a bus than the number of seats fitted in it; standing in the bus and sitting atop it are also ways to ferry passengers! And the driver moves slowly — ambling along like a camel — mindful of people atop the bus so that they too can travel comfortably without fear. Unsafe though it may seem, accidents rarely happen in those parts of the country and both passengers and drivers have mastered the art of that form of travel.

Jugaad is a way of life for Indians. However, it is instructive to study the innovative ways in which it works, to understand the household and business mindsets of average India. Jugaad is very active in many emerging markets: Simone Ahuja. Co-authors of the book 'Jugaad Innovation', Navi Radjou, Jaideep Prabhu and Simone Ahuja get together to explore if jugaad helps large organizations or if it only for the small scale enterprises Q: How did the three of you decide to get together and write the book? 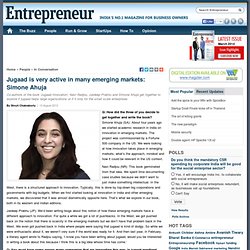 Simone Ahuja (SA): About four years ago we started academic research in India on innovation in emerging markets. The project was commissioned by a Fortune 500 company in the US. We were looking at how innovation takes place in emerging markets, what’s the approach, mindset and how it could be relevant in the US context. Navi Radjou (NR): This book germinated from that idea. What the West Can Learn from Jugaad. For three generations, Gustavo Grobocopatel’s family had pursued a small-scale, subsistence model of farming in Argentina. Grobocopatel dreamed of growing his farm into a larger, more sustainable enterprise, but his vision was hindered by scarcity.

For one thing, he had difficulty accessing large tracts of land. Although Argentina is a vast country, farmland is hard to come by. Only 10 percent of the land is arable, and much of that is controlled by a few owners who are reluctant to part with it. Grobocopatel also faced a shortage of the skilled labor needed to scale up his business—people who could fertilize, sow, tend, and harvest crops. Instead of giving in to these challenges, Grobocopatel developed an ingenious business model.

Los Grobo’s innovative business model was born out of adverse circumstances. Ideas of Jugaad. "Use and Re-use" “Used in India is a multimedia installation, which showcases both media devices and narratives of their use, to illumine the nature of street innovation, technology production and social exchange in India. Used in India has been conceived of and produced by CKS, a research and design practice in Bangalore. Our collection of actual devices and inquiry into user practice suggests that local users are infinitely well versed in innovatively re purposing, repairing, reworking and refurbishing technology to suit their social practices and contextual needs.