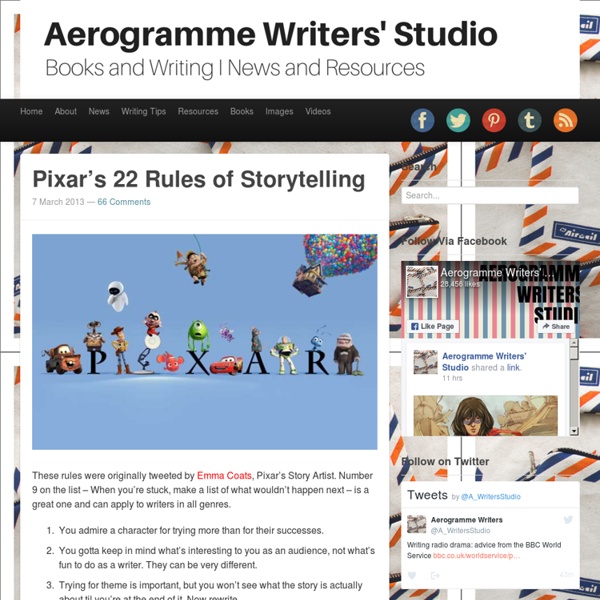 These rules were originally tweeted by Emma Coats, Pixar’s Story Artist. Number 9 on the list – When you’re stuck, make a list of what wouldn’t happen next – is a great one and can apply to writers in all genres. You admire a character for trying more than for their successes.You gotta keep in mind what’s interesting to you as an audience, not what’s fun to do as a writer. They can be very different.Trying for theme is important, but you won’t see what the story is actually about til you’re at the end of it. Now rewrite.Once upon a time there was ___. Every day, ___.

Wall-E and Toy Story Screenwriter Reveals the Clues to a Great Story Warning: this video contains strong language Last week we posted Pixar’s 22 Rules of Storytelling, a list of 22 golden tips first tweeted by Pixar Story Artist Emma Coats.The article received a tremendous response and since then a number of people have mentioned to us this TED talk by Andrew Stanton. Stanton was the writer for all three Toy Story movies, as well as being the writer/director for Wall-E, Finding Nemo and John Carter. In this captivating lecture Stanton talks about the early days of Pixar, storytelling without dialogue, and capturing a truth from your experiencing it. Falling short: seven writers reflect on failure • Diana Athill: 'It is possible to make use of failure, and forget it'• Margaret Atwood: 'Get back on the horse that threw you'• Julian Barnes: 'Success to one person can be failure to another'• Ann Enright: 'Failure is what writers do. It is built in'• Howard Jacobson: 'You have to see failure as an opportunity'• Will Self: 'People say my writing is dreadful and pretentious'• Lionel Shriver: 'No one wants to buy a book about disappointment' Diana Athill From the age of 22 to that of about 39 I knew myself to be a failure. For many of those years I was not positively unhappy, because I was doing work I enjoyed, was fond of my friends and often had quite a good time; but if at any moment I stood back to look at my life and pass judgment on it, I saw that it was one of failure. That is not an exaggeration.

Guest Post: How I Went From Writing 2,000 Words a Day to 10,000 Words a Day by Rachel Aaron When I started writing The Spirit War (Eli novel #4), I had a bit of a problem. I had a brand new baby and my life (like every new mother’s life) was constantly on the verge of shambles. I paid for a sitter four times a week so I could get some writing time, and I guarded these hours like a mama bear guards her cubs – with ferocity and hiker-mauling violence. To keep my schedule and make my deadlines, I needed to write 4000 words during each of these carefully arranged sessions. I thought this would be simple.

Underlined Book Quotes Become Clever Illustrations Bookworm or not, you can't help but enjoy these black and white illustrations of literary quotes by Evan Robertson. The New York-based graphic designer has taken some of the cleverest lines written by famous authors such as William Faulkner and Oscar Wilde and turned them into wonderful posters. These literature-inspired fine art illustrations are currently being sold on Etsy under the name Obvious State. Robertson would see a "little jewel of a sentence" and he'd underline it.

How to Structure A Story: The Eight-Point Arc By Ali Hale - 3 minute read One of my favourite “how to write” books is Nigel Watts’ Writing A Novel and Getting Published. My battered, torn and heavily-pencil-marked copy is a testament to how useful I’ve found it over the years. Although the cover appears to be on the verge of falling off altogether, I’ve risked opening the book once more to bring you Watts’ very useful “Eight-Point Story Arc” – a fool-proof, fail-safe and time-honoured way to structure a story. How to tell a great story, visualized A good story can make a campfire that much eerier. A good story can flip a conversation at a party from completely awkward to wonderful. Andrew Stanton: The clues to a great storyA good story can glue your nose to a book. And, on screen, a good story can rivet generation after generation. So, uh, how do you tell one?

12, William Faulkner William Faulkner, ca. 1954. Photograph by Carl Van Vechten William Faulkner was born in 1897 in New Albany, Mississippi, where his father was then working as a conductor on the railroad built by the novelist’s great-grandfather, Colonel William Falkner (without the “u”), author of The White Rose of Memphis. Soon the family moved to Oxford, thirty-five miles away, where young Faulkner, although he was a voracious reader, failed to earn enough credits to be graduated from the local high school. In 1918 he enlisted as a student flyer in the Royal Canadian Air Force. He spent a little more than a year as a special student at the state university, Ole Miss, and later worked as postmaster at the university station until he was fired for reading on the job.