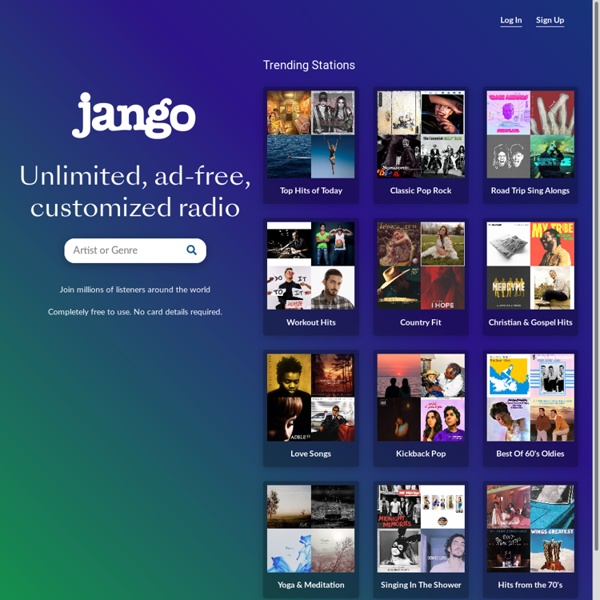 BOOK of KAOS Tarot Originally titled, 'The Bohemian Tarot' -(underwhich the original Major and Minor Arcana sets were published seperately as A5 limited-edition (100 copies) folios around 1991) I redrew about half of the major arcana a decade later to form the deck into 'The BOOK of KAOS', an inter-sect-ion of ChaOrder Magick and the aeonic double current of Horus and Maat. The introduction of these added layers of esoteric symbolism do not detract, however from the deck's original appeal of directly emotive, pagan and tribal imagery. The 2001 Limited Edition was the first time the completed BOOK of ChAOS Tarot Deck was published as a whole. The 111 copies sold within 6 moonths.

Top 10 Free Ways To Discover New Music Online Bored with your music and want to discover some new bands or singers? There are two main ways you can do that online. You can use services which create music maps, allowing you to explore artists similar in genre to the artists you already listen to. Or you can use music blogs and websites that showcase independent or up-and-coming artists, whether the music is being reviewed, or posted by the musicians themselves. Some of these websites have a community built around them, which gives fans the opportunity to interact directly with these new talents. World of CEOs Jobs, Opportunities and Talent Getting the top job How to give yourself the best possible shot As a former CEO headhunter and CEO confidant, Steve Tappin, our founder, is accustomed to helping CEOs get the top job. Here are his top tips:

make music together let's get started making music... 1draw on the grid with your mouse to make a beatshow me2 save your track and share it with friends. show me3 out of ideas? roll the dice and start remixing. show me4 explore the beatlab community show me For more tips, tutorials vidoes, and FAQs, check out our community wiki. You can use the following keyboard shortcuts while composing a track.

Persian princesses Alexander the Great July 20 356 BC – June 10 323 BC, also known as Alexander III, was an ancient Greek king (basileus) of Macedon (336–323 BC). He was one of the most successful military commanders in history, and was undefeated in battle. By the time of his death, he had conquered most of the world known to the ancient Greeks. Following the unification of the multiple city-states of ancient Greece under the rule of his father, Philip II of Macedon (a labour Alexander had to repeat because the southern Greeks rebelled after Philip's death), Alexander conquered the Achaemenid Persian Empire, including Anatolia, Syria, Phoenicia, Judea, Gaza, Egypt, Bactria, and Mesopotamia, and extended the boundaries of his own empire as far as Punjab, India. Prior to his death, Alexander had already made plans for military and mercantile expansions into the Arabian peninsula, after which he was to turn his armies to the west (Carthage, Rome, and the Iberian Peninsula). more...

The ORDER of CHAOS Chaos is all around us and within us. Chaos destroys and creates. Chaos is the spontaneous, unpredictable movement of the universe. Chaos is change, the only constant. As the essence of unpredictability, chaos scares many. 7 Alternatives to Pandora and Last.FM Whether you are annoyed by the ads on Pandora, the limited number of skips, or the abyss of cruel 30-second song teasers from Last.FM, many online listeners are growing weary of mainstream methods of hearing new music. While the Pandora algorithm is strong, and the Last.FM related artists tool is pretty useful, don’t fool yourself in to thinking that there aren’t other great ways to expose yourself to new music in the depths of cyberspace. Here are 7 alternatives to Pandora and Last.FM that will infuse your day with an uninterrupted stream of music that large record companies haven’t managed to squash under their thumbs yet.

25 Top UK Startups The London startup scene is well-documented. But the UK innovation ecosystem is not confined to the city. All types of companies are emerging from surrounding places, in Cambridge, Edinburgh, Brighton, Manchester, Birmingham, small Welsh villages, an island in the English Channel. Here is a list of the top 25, although we could've easily named 125. Nominate some of your own picks in the comments below. 1. Clementine Music Player Search and play your local music library. Listen to internet radio from Spotify, Grooveshark, Last.fm, SomaFM, Magnatune, Jamendo, SKY.fm, Digitally Imported, JAZZRADIO.com, Soundcloud, Icecast and Subsonic servers. Search and play songs you've uploaded to Box, Dropbox, Google Drive, Skydrive and Ubuntu One. Create smart playlists and dynamic playlists. Tabbed playlists, import and export M3U, XSPF, PLS and ASX. CUE sheet support.

Dec, 29 th 2012 6:30 AM The ancient Maya predict that the world would End! Krabi wrote: Actually, every 3600 years the rogue planet Nibiru's elongated orbit brings it into our inner solar where it wreaks havic on the inner-planetary bodies. Maybe Nibiru is what was responsible for stripping Mars of its atmosphere and destroying it, but this time around it's supposed to come close to us and many leading scientists see the scenario truly frightening. As Nibiru sweeps by it will very well strip some of our upper atmosphere away, and the gravitational pull it has on our earth will create great earthquakes and super tsunamis that will change the surface of the earth.

Miniature Crimean Castle "QUANTUM SHOT" #267link "Swallow's Nest" - Little-known Romantic Destination Something inherently romantic speaks to our hearts when we see a castle looking out to the sea, from a high cliff among imposing coastal mountains. If you remove the hustle of a resort town around it, the place becomes infused with fantasy and magic, especially in the glow of a setting sun.

Wild Mood Swings <p style="font-size:x-large;">Oh no! You don't have Javascript enabled. Please <a href=" Javascript now</a> or the only moods you'll experience will be boredom and frustration.</p><hr noshade>