How To Build The World's Best Paper Airplanes 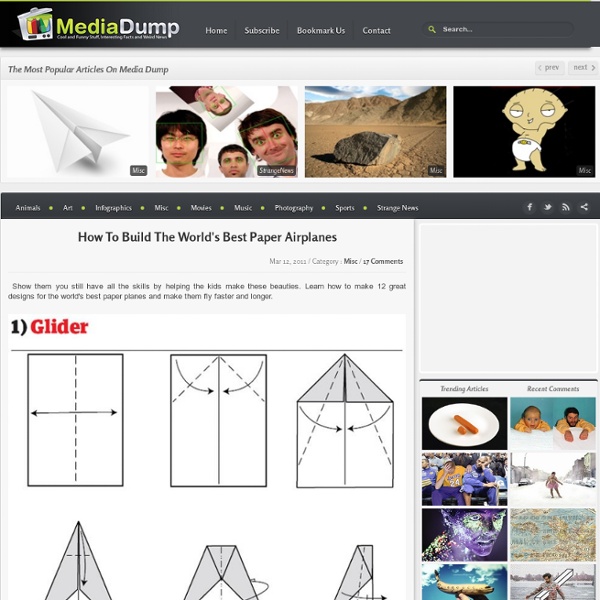 Windows 10 Might Be Free, but Your Privacy Is Priceless By Mick Meaney / acclaimednews.com Although free, Windows 10 comes packed with some concerning new ‘features’. As Windows 10 is launched and downloaded across the globe by early adopters eager to experience the new operating system, a word of caution is needed. Microsoft, who are no stranger to privacy issues, have installed some worrying new features as default on Windows 10. You may recall that in 2013 it was revealed that Microsoft worked closely with the National Security Agency (NSA) to allow them to access encrypted messages in Outlook and Hotmail. It granted NSA and FBI access to SkyDrive, and after purchasing Skype the company actually tripled the amount of video calls the NSA were recording via the service.

3D Paper Owl from mmmcrafts The gifted Larissa from mmmcrafts is here sharing her amazing talents with an unbelievable 3D paper owl. Larissa writes… Left: art made with this tutorial, Right: art made with alternate colors (see note at the end of the tutorial) Hey, Craft Campers! Math Education: Being Outwitted by Stupidity - Education News By Barry Garelick In a well-publicized paper that addressed why some students were not learning to read, Reid Lyon (2001) concluded that children from disadvantaged backgrounds where early childhood education was not available failed to read because they did not receive effective instruction in the early grades. Many of these children then required special education services to make up for this early failure in reading instruction, which were by and large instruction in phonics as the means of decoding. Some of these students had no specific learning disability other than lack of access to effective instruction. These findings are significant because a similar dynamic is at play in math education: the effective treatment for many students who would otherwise be labeled learning disabled is also the effective preventative measure.

‘Incredibly intrusive’: Windows 10 spies on you by default Microsoft’s new Windows 10 operating system is immensely popular, with 14 million downloads in just two days. The price of the free upgrade may just be your privacy, though, as changing Windows 10’s intrusive default settings is difficult. Technology journalists and bloggers are singing Windows 10’s praises, often using the words such as “amazing,”“glorious” and “fantastic.” The operating system has been described as faster, smoother and more user-friendly than any previous version of Windows.

Mandala Maker Online, Free Mandala Generator welcome to our free online !!! easy mandala generator , one touch without prior knowledge just start to draw inside the circle and make your own beautiful mandala, it is fun and free, our online mandala painter will help you make the most beautiful mandalas. New Glasses Transform The Way Colorblind People See The World This special eyewear is giving many a new outlook. EnChroma, a company in Berkeley, California, has created colorblindness correcting glasses, which allow those who are colorblind to see hues they may have never experienced before. While the sunglasses, which are meant for outdoor use in daylight, were first released two years ago, the company's new version is made from polycarbonate -- a material that's kid-friendly and usable in sports. Left: Venice seen by someone with colorblindness.

What does a lake of molten aluminum have to do with renewable energy in Germany? Germany is a renewable energy powerhouse. In the past years, they've been breaking all kinds of records, and while others are now bigger drivers of clean energy adoption (China, U.S.), the country still has a huge installed base of wind and solar power. The challenge is now to better integrate these intermittent sources of power with the rest of the grid. Make an Animation - Digital Art Skills ABCya is the leader in free educational computer games and mobile apps for kids. The innovation of a grade school teacher, ABCya is an award-winning destination for elementary students that offers hundreds of fun, engaging learning activities. Millions of kids, parents, and teachers visit ABCya.com each month, playing over 1 billion games last year. Apple, The New York Times, USA Today, Parents Magazine and Scholastic, to name just a few, have featured ABCya’s popular educational games. ABCya’s award-winning Preschool computer games and apps are conceived and realized under the direction of a certified technology education teacher, and have been trusted by parents and teachers for ten years. Our educational games are easy to use and classroom friendly, with a focus on the alphabet, numbers, shapes, storybooks, art, music, holidays and much more!

untitled Are you an artist? Maybe you enjoy crafting on the weekends or even just hanging out with your friends. Good news: Keep it up -- and not just for fun. It's also good for your health. Better (Free) Graphical IDE Than Arduino...? OK, here's an example I'm currently using on the desktop side of things. Let's say I want to transmit data from the host to the micro, arranged in packets. Let's say I have the following defined data structures in C: Paper Contest Sponsor. The Instructables Paper Contest (the "Contest") is an online contest with skill, ability and knowledge components that is sponsored by Autodesk, Inc., a Delaware corporation having its principal office at 111 McInnis Parkway, San Rafael, CA 94103, USA ("Sponsor"), in connection with the Instructables service and website, www.instructables.com, (the "Sponsor Site"). The Contest is co-sponsored by the company or companies listed here, if any (each, a "Co-Sponsor"): The Contest is governed by these Official Rules (these "Rules"). For any questions regarding the Contest, the Sponsor may be contacted by email at [service@instructables.com] or by mail at the address identified in Section B.16 ("Winner's List; Mailing List") below.Overview; Object of the Contest.