Origami Folding Technique Instructions - How to divide paper into US dollar bill. The US dollar bill is approximately 2.6 inches x 6.1 inches, which is a 1:2.35 ratio.

You can measure this and cut your paper to size accordingly. Or you can use the technique below to cut your regular square origami paper into approximately the US dollar bill size. The paper will have the same ratio as the US dollar bill. Divide Square Paper into US Dollar bill Step 1: Start with a 6 inch x 6 inch (15 cm x 15cm) square origami paper, color side down. (You can use the same steps for a 8.5 inch x 11 inch paper as well) Fold paper in half on the diagonal axis.

Divide Square Paper into US Dollar bill Step 2: Fold the top layer back to meet the diagonal edge on the right. Folding From Crease Patterns – Gilad Naor's blog. It was originally published on April 2004. 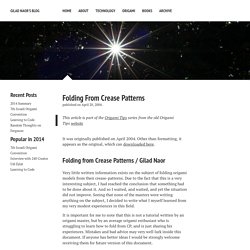 Other than formatting, it appears as the original, which can downloaded here. Very little written information exists on the subject of folding origami models from their crease-patterns. Due to the fact that this is a very interesting subject, I had reached the conclusion that something had to be done about it. And so I waited, and waited, and yet the situation did not improve. Seeing that none of the masters were writing anything on the subject, I decided to write what I myself learned from my very modest experiences in this field. Multi-Model Mobiles - The Timeless Crane. How to Wet-fold origami models: illustrated guide. Fold the model as you usually do, but with one exception. 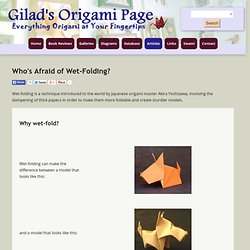 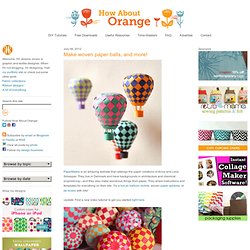 They live in Denmark and have backgrounds in architecture and chemical engineering—and they also make wondrous things from paper. They share instructions and templates for everything on their site. Try a hot air balloon mobile, woven paper spheres, or jar boxes with lids! Paper Sharks. Inspired by the traditional Japanese story that folding 1,000 origami cranes (千羽鶴) will make one’s wish come true, Paper Sharks is a project that aims to raise support and awareness for shark conservation. 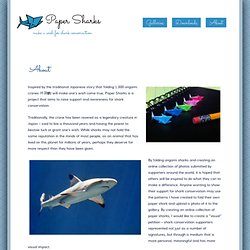 Traditionally, the crane has been revered as a legendary creature in Japan – said to live a thousand years and having the power to bestow luck or grant one’s wish. While sharks may not hold the same reputation in the minds of most people, as an animal that has lived on this planet for millions of years, perhaps they deserve far more respect than they have been given. By folding origami sharks and creating an online collection of photos submitted by supporters around the world, it is hoped that others will be inspired to do what they can to make a difference. Anyone wanting to show their support for shark conservation may use the patterns I have created to fold their own paper shark and upload a photo of it to the gallery. The Japanese Paper Place - Origami Paper. Origami paper. Origami paper is used to fold origami, the art of paper folding. 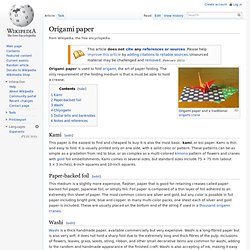 The only requirement of the folding medium is that is must be able to hold a crease. Kami[edit] Wall of Rainbow Koi. For making the koi, designed by Sipho Mabona, I used an online diagram (whose link doesn't work anymore for some reason) and a stop-motion video of the folding process so have fun! 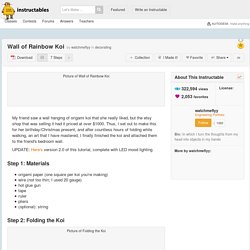 It's pretty tricky, especially the swivel folds, but feel free to comment below if you have difficulties and I'll try to help. Fold as many as you want, but I folded 39 of them: 1 white, 2 bright yellow, 3 yellow-orange, 2 dark orange, 2 light orange, 7 red, 2 pink, 5 purple, 2 dark blue, 5 medium blue, 4 sky blue, 1 dark green, and 3 leaf green. By the way, this link might help. UPDATE:This is a link to a video tutorial for folding the koi; it'll make life a lot easier than following the stop-motion video. Wet-folding Paper. Calico's Origami Aquarium - ƒ. The_Clow_Book_Deluxe.rar. Michael g. lafosse pdf. Frequently Asked Questions. On this site, you will find papercraft models of Pokémon which you can print out and build yourself, with just a pair of scissors and little bit of glue. 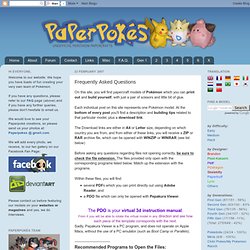 Each individual post on this site represents one Pokémon model. At the bottom of every post you'll find a description and building tips related to that particular model, plus a download link. The Download links are either in A4 or Letter size, depending on which country you are from, and from either of these links, you will receive a ZIP or RAR archive file, which can be opened with WINZIP or WINRAR (see list below) Before asking any questions regarding files not opening correctly, be sure to check the file extension. The files provided only open with the corresponding programs listed below. Www.jieyuele.com/wp-content/uploads/2010/10/zzdq.pdf. Portal:Origami. The Origami Portal Origami (折り紙, origami?) 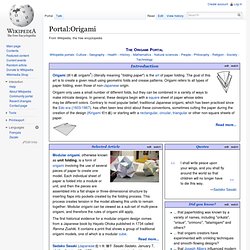 (literally meaning "folding paper") is the art of paper folding. The goal of this art is to create a given result using geometric folds and crease patterns. Origami refers to all types of paper folding, even those of non-Japanese origin.