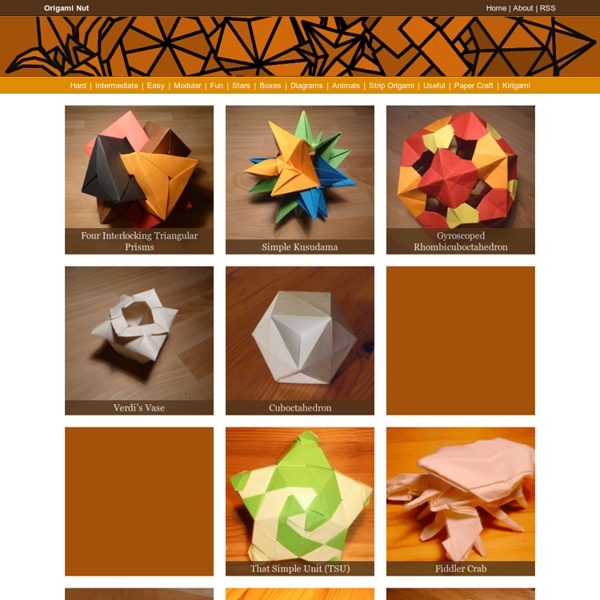 Lucky Wishing Stars You’ve probably seen these little puffy origami stars before. They are really quick to make, and you don’t need any special materials to make them. You can buy lucky star pre-cut strips from origami stores, but you can just as easily make your own from medium weight coloured paper, e.g. scrapbooking paper, or even strips cut from magazine pages – as the strips are so narrow, the original text or image won’t be obvious in the finished star.

3D Origami Swan This 3D origami swan was made with 400+ sheets of paper each folded into a small triangle. This type of paper folding is called Golden Venture Folding or Chinese Paper Folding. Note that there are 2 slits which are called "pockets". Easy Tiny Envelopes Guest tutorial by Ruth Bleakley I discovered this envelope making method completely by accident when pulling soggy rain-soaked mail out of my leaky mailbox - I had a total *eureka* moment when the envelope I gingerly opened up completely unfolded at the seams revealing an envelope "template" perfectly. I've seen many envelope tutorials online, some offer downloadable templates, some show fancy paper folding techniques and some suggest specific measurements to create your own D.I.Y. envelopes. Origami Polyhedra - nuwen.net In all chaos there is a cosmos, in all disorder a secret order About this page: This page will detail how to make four different types of mathematical shapes by producing and assembling a number of tiny paper pieces. I did not invent the pieces or the method of making pieces; in fact, they seem to be called "Sonobes" (though I've always called them "pieces" and will do so here). Here is a rather detailed page that shows pieces that resemble mine. I also did not invent three of the models presented on this page.

Origami Box The origami box is simple to make, and can be used to hold other origami pieces. Or important stuff, like candies. This origami box is also called Masu, which is Japanese for a square wooden box. Follow the step by step photos to make the origami box.

Joost Langeveld Origami Page Home - Gallery - Contact - My upper floor - Videos - Privacy Policy GALLERY PAGE 1 page1 - page2 - page3 - page4 - page5 - page6 - page7 - page8 - page9 - page10 - page11 - page12 In this gallery are pictures of origami models which I designed since 2006. I made a video or diagrams with explanation of almost every origami model in this gallery. These origami parrots move on a technick lego construction with just one tiny engine Origami Envelope If you’d like to make these cute little “Flap Lock” Origami Envelopes–all you’ll need is a piece of square paper…any size. I used Christmas scrapbook paper. 1. Upgraded Origami Published on October 3rd, 2011. Origami, that awesome paper folding technique we all know about or have seen, has been a popular art form within Japan for many centuries and popularized elsewhere during the mid 1900s (Wikipedia). It is said to help calm the soul, build patience, and really good practice for building things.

Cake Treat Boxes Finally, as promised, the tutorial! Yes, it really did take me two days to get this ready. I hope you enjoy it. Be sure to create a FREE studio on eWillow.com and upload photos of your cakes when you are finished. You can even sell them, too!

Fun with Foam Printing - Easy Tutorial I loved this idea because not only can you recycle these horrid polystyrene containers, but the process is really simple. You could even use tracing paper and trace your design so you don't even need to be able to draw. You could make a whole series of cards like this or just a colorful print to hang on your wall and cheer up the place. Materials needed: Foam or polystyrene container pencil paint or ink small roller 1. Square Pillow Gift Box Wrapping gifts yourself is half the fun of giving them. If this claim doesn’t convince you, there’s another, more down to earth, reason to prepare DIY wrapping - it’s so much cheaper than the bought one. Let the shops keep their pricey boxes and make one yourself just as we did!