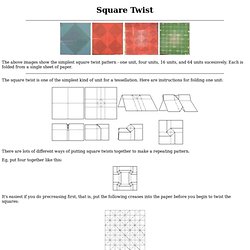 Each is folded from a single sheet of paper. The square twist is one of the simplest kind of unit for a tessellation. Here are instructions for folding one unit: There are lots of different ways of putting square twists together to make a repeating pattern. Eg, put four together like this: It's easiest if you do precreasing first, that is, put the following creases into the paper before you begin to twist the squares: If you want, you can just put the following creases in: (ignore the dotted lines).

With many tessellations, you need to fold all the folds gradually at the same time. The above images are of tessellation patterns obtained in very simple ways from the simplest square twist pattern, just by adding extra folds in various places after folding the basic pattern as above. Origami Tessellations. Dissection Pieces. By a dissection puzzle, I mean the kind of puzzle where you have several polyhedra, and you have to fit them together to make another. 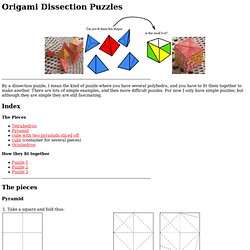 There are lots of simple examples, and then more difficult puzzles. For now I only have simple puzzles; but although they are simple they are still fascinating. Index The Pieces How they fit together The pieces Pyramid Tetrahedron. Kirigami pop up cards. What is an Emulator? 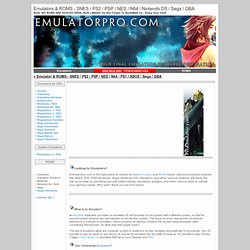 An emulator duplicates (provides an emulation of) the functions of one system with a different system, so that the second system behaves like (and appears to be) the first system. This focus on exact reproduction of external behavior is in contrast to simulation, which concerns an abstract model of the system being simulated, often considering internal state. So what does this simply mean? The use of emulators allow any computer system to pretend to act like hardware and duplicate it's processes. Yes, it's possible to play an game on any device as long as the emulator has the ability to keep up. Can I Download Emulators? Yes, emulatorpro.com allows the download of any emulation files that are contained on the site. Paper and Plotter: A 3D Surface. Paul Haeberli This was one of my first projects in computer graphics. 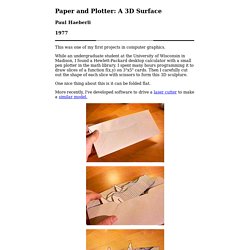 While an undergraduate student at the University of Wisconsin in Madison, I found a Hewlett-Packard desktop calculator with a small pen plotter in the math library. I spent many hours programming it to draw slices of a function f(x,y) on 3"x5" cards. Then I carefully cut out the shape of each slice with scissors to form this 3D sculpture. One nice thing about this is it can be folded flat. Laser Cutting and Scoring: A 3D Surface Function. Paul Haeberli Nov 1996. 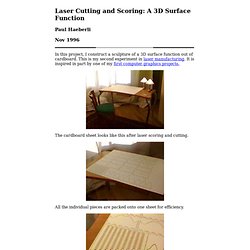 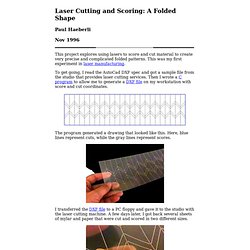 This was my first experiment in laser manufacturing. To get going, I read the AutoCad DXF spec and got a sample file from the studio that provides laser cutting services. Then I wrote a C program to allow me to generate a DXF file on my workstation with score and cut coordinates. The program generated a drawing that looked like this. I transferred the DXF file to a PC floppy and gave it to the studio with the laser cutting machine.

On mylar the scored lines appear a light gray color, while on paper these score lines are slightly brown. To make this shape, first the material is folded into a zig zag pattern. Origamic Architecture: Stunning Sculptures Cut Out of Paper. In the Japanese paperfolding art of origami, cutting the paper is frowned upon. 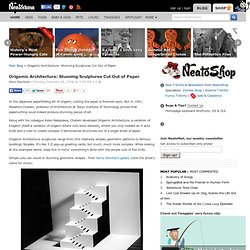 But in 1981, Masahiro Chatani, professor of Architecture at Tokyo Institute of Technology proved that papercutting could indeed produce stunning pieces of art. Along with his colleague Keiko Nakazawa, Chatani developed Origamic Architecture, a variation of kirigami (itself a variation of origami where cuts were allowed), where you only needed an X-acto knife and a ruler to create complex 3-dimensional structures out of a single sheet of paper. Origamic Architecture sculptures range from (the relatively simple) geometric patterns to famous buildings' facades.

It's like 3-D pop-up greeting cards, but much, much more complex. While looking at the examples below, keep this in mind: everything's done with the simple cuts of the knife. Simple cuts can result in stunning geometric shapes - from Gerry Stormer's gallery (click the artist's name for more): Crease Patterns. S Best Photos of paperfolding.

Flickr Hive Mind is a search engine as well as an experiment in the power of Folksonomies. 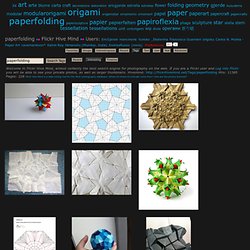 All thumbnail images come directly from Flickr, none are stored on Flickr Hive Mind. These photos are bound by the copyright and license of their owners, the thumbnail links take to you to the photos (as well as their copyright and license details) within Flickr. Because some other search engines (Google, etc.) index parts of Flickr Hive Mind, you may have been led here from one of them. Welcome to Flickr Hive Mind, almost certainly the best search engine for photography on the web. If you are a Flickr user and use Flickr Stats you may have seen people being led to your photos via Flickr Hive Mind (as a Referrer). Flickr Hive Mind is a data mining tool for the Flickr photography database, allowing search by: tags(keywords); Flickr photography groups; Flickr users, their contacts, and favorites; free text; the Flickr Explore algorithm for interestingness. Pictures of my designs. OrigamiOrigin. ‪firstfold's Channel‬‏ 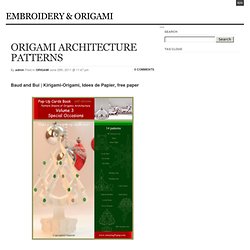