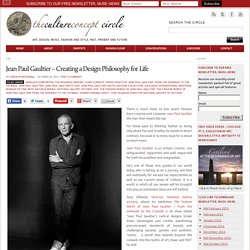 For those used to thinking fashion as being only about fun and frivolity, he stands in direct contrast, because in so many ways he is about so much more. Jean Paul Gaultier is an artisan creator, one safeguarded, supported and well respected for both his erudition and imagination. He’s one of those rare guides in our world today who is taking us on a journey, one that will eventually far exceed our expectations as well as our current sense of ‘culture’. Fashion for Monsieur Gaultier is not only integral to his life’s journey but also the most important aspect of his personal philosophy about living his life as, and through art. An animated Jean Paul Gaultier in conversation with Thierry-Maxime Loriot, on stage at the NGV, October 2014, photo: Jo Bayley, The Culture Concept Circle. Marchesa Spring 2011 Ready-to-Wear - Collection - Gallery. Marchesa Spring 2010 Ready-to-Wear - Collection - Gallery. Marchesa Spring 2009 Ready-to-Wear - Collection - Gallery. 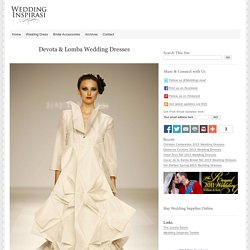 Above: fantastical origami inspired bridal coat; below: gorgeous, airy creations wrapped with wide silk ribbons. Art attack — beautiful folding, creasing and pleating techniques on these two gowns. Something more retro – strapless gown featuring circular skirt with asymmetrical hemline. Delicious flounces — dress with ruffles that look like piped buttercream icing… mmm… But this dress takes the pretty cake — so in love with the color and ribbon accents just the right places. 50 Origami-Inspired Fashion Styles. By: Tana Makmanee - Published: Apr 2, 2013 • References: With fashion constantly changing within a blink of an eye, you never know what style or technique may be the next big hit, but these origami-inspired fashion styles are perfect for anyone looking to add some futuristic options to their wardrobe. 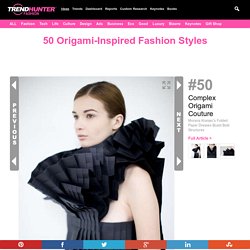 Origami is often associated with paper sculptures and designs that you can make from ordinary pieces of paper. These creative fashion styles however, takes the iconic origami forms and shapes and utilizes them in all sorts of couture collections and accessories, serving to give these pieces of clothing a futuristic and striking appeal. From box-like origami heels to stunning geometric couture dresses, these futuristic fashion styles are sure to impress any fashionista looking to get the heads up on the next hottest fashion styles.

TheManuscript: ORIGAMI and KIRIGAMI meets fashion part two. Issey Miyake. Paper dress. It’s the right thing to do when your fashion blog has got yellow paper dress written all over it – embark on a paper dress trail, albeit in cyberspace. 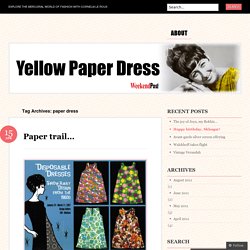 So, googling left me ogling over the wonderful world of “Wear and Tear” – past and present. It all started in the 1960s which, apart from being a remarkable period taking fashion to “new heights” with daring innovations such as the mini skirt – was also the beginning of the disposable fad in America. Cutlery, plates, razors, diapers…and the birth of Plastic Island in the North Pacific perhaps? According to Wikipedia.com, paper dresses were invented by the Scott Paper Company in 1966 as a marketing tool. For one dollar, women could buy the dress and also receive coupons for Scott paper products. The company was taken aback by the overwhelming reaction with women ordering half a million of these dresses in under a year. Andy Warhols Souper Dress Paper dresses sounded like the next great invention – convenient, cheap and fashionable. Susan Murray Blog: Trend Watch - Pleats and Origami. The most well known Origami fold is probably the crane. 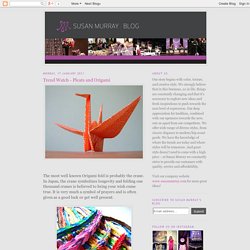 In Japan, the crane symbolizes longevity and folding one thousand cranes is believed to bring your wish come true. It is very much a symbol of prayers and is often given as a good luck or get well present. Origami is a traditional Japanese folk art of paper folding, which started in the 17th century AD and was popularized in the mid 1900s (Wikipedia). Since then it has evolved into a modern art form as well as the muse for many designers and artists. Sharp lines characteristic to folded paper of Origami and the unique pattern of colors have inspired architectural designers around the world. The artists and designers of the fashion world have also taken Origami as a muse in their work. FASHION MOMENT: Origami Inspiration! Couture Elegance: Fashion Designs Inspired By Origami. My last brief sparked an interest in using origami in designs. 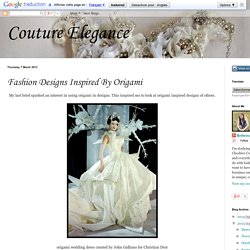 This inspired me to look at origami inspired designs of others. origami wedding dress created by John Galliano for Christian Dior. Magazine - Article. Over a muggy June weekend, more than 600 paper-folding enthusiasts from around the globe are gathered in New York for the annual Origami USA conference. 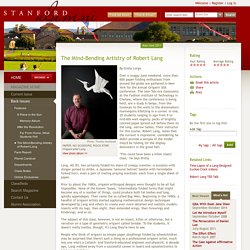 The late-'50s-era classrooms at the Fashion Institute of Technology in Chelsea, where the conference is being held, are a study in beige, from the linoleum to the walls to the dressmakers' mannequins kibitzing in a corner. In one, 20 students ranging in age from 9 to mid-60s wait eagerly, packs of brightly colored paper spread out before them on the long, narrow tables.

Their instructor for this course, Robert Lang, notes that the turnout is impressive, considering he didn't provide a sample of the model they'd be folding for the display downstairs in the great hall. Paper Perfect. On February 4, 2014, Robert Lang joined Joshua Foer onstage at the Institute Library in New Haven, Connecticut, as part of the ongoing series “Amateur Hour,” in which various tinkerers, zealots, and collectors discuss their obsessions. 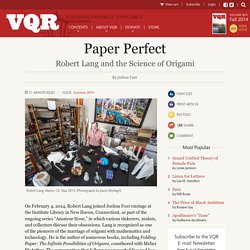