The 10 Best Foods for Your Looks - Lifestyle 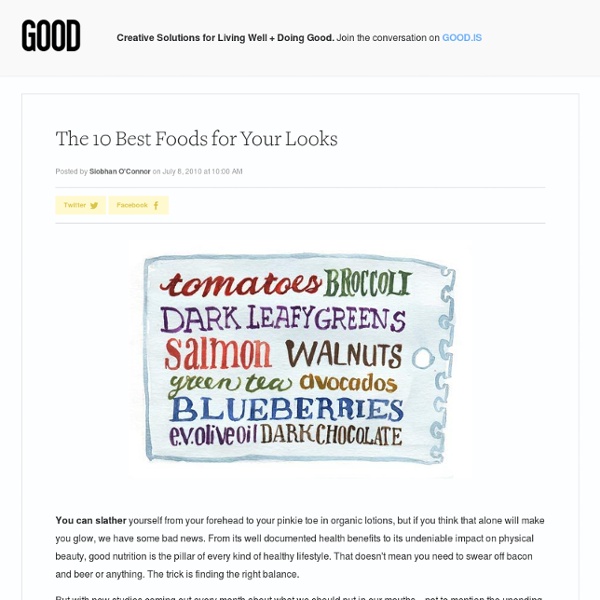 You can slather yourself from your forehead to your pinkie toe in organic lotions, but if you think that alone will make you glow, we have some bad news. From its well documented health benefits to its undeniable impact on physical beauty, good nutrition is the pillar of every kind of healthy lifestyle. That doesn't mean you need to swear off bacon and beer or anything. The trick is finding the right balance. But with new studies coming out every month about what we should put in our mouths—not to mention the unending discovery of mysterious superfruits from deep in the forests of wherever—it can be hard to keep track of what, exactly, we should be eating. To simplify things, here's a can't-go-wrong shopping list. This is the tenth installment in a series inspired by No More Dirty Looks: The Truth About Your Beauty Products and the Ultimate Guide to Safe and Clean Cosmetics, a book by GOOD's features editor Siobhan O'Connor and her co-author Alexandra Spunt. Read more on their blog.

Foods You Don't Have to Buy Organic There are many reasons to buy organic foods. The USDA Organic label tells you that fruits and veggies weren't raised using manmade chemical pesticides, fossil fuel- or sewage-based fertilizers or genetically modified seeds. On meat, the label indicates that the feeds provided met those same standards, and that the animals weren't administered hormones and antibiotics. Bottom line: "Organic" is more sustainable and healthier -- for the environment and farm workers, certainly, and often for you and your family. How is organic healthier? It's healthier because some studies suggest that organic produce has more nutrients than its conventional counterparts, probably because the soil is left in better condition after repeated plantings; and healthier because you avoid ingesting any harmful pesticide residues left on conventional produce.

Looking to the Dietary Gods: Eating Well According to the Ancients (Photo: H.Koppdelaney) Just a few weeks ago, I received the following from Ryan Holiday: “…in the last 6 months, I’ve lost 15 lbs and am in the best shape of my life. From adding in sprinting to my running regime, using kettle bells once a week, using a weighted vest while taking long walks, and the cat vomit exercise, I now have abs and — like I said — lost weight in places I didn’t know I was storing fat. It was all from your book and keeping to the slow-carb diet. Here’s the part I really have to thank you for: by changing the way I thought about running, I ran the fastest mile in my life, and that’s after four years of cross country and track in high school.

21 Tips For Building the Body of Legend Bruce Lee 5 Flares Facebook 4 Twitter 1 Google+ 0 StumbleUpon 0 Pin It Share 0 5 Flares × Bruce Lee had one of the most iconic bodies in the film industry. Even the big-shots of bodybuilding like Joe Weider and Arnold Schwarzenegger have nothing but praise for him. Here’s what Arnold Schwarzenegger has to say about Bruce: There’s a lot of people that do all those moves and they do have the skill, but they don’t look visually as believable or as impressive as Bruce Lee did. He was one of a kind. – Arnold Schwarzenegger Easy Cat Eyeliner Tutorial Cat eyeliner has got to the most unpredictable thing in makeup. You never know what shape you'll end up with. One wrong move & you'll have to think of ways to make it look right.

Food Nutrition Facts - Healthy Living Tips at WomansDay Every child has heard the healthy-eating mantra "You are what you eat." But there may be a closer resemblance between good-for-you grub and your body than you thought. We found 10 foods that mirror the body parts they provide nutrients for—for example, brain-boosting walnuts actually look like a brain. Coincidence? Maybe. Though these healthy foods are beneficial to the whole body, the list below is a fun reminder of what to eat to target specific areas.

25 Healthy Foods for 2012 By kathypatalsky | healthy foods to try in 2013 So often we talk about removing ‘bad’ foods from our diets and restricting what we eat. Well instead of forcing yourself into a state of deprivation, try a different approach for 2013. 20 Super Brain Foods « Zen We know that the foods we eat affect the body but they can have even more influence on how well our brain functions. What we eat can have a POWERFUL affect on our brain’s energy, how the mind handles tasks, and our general mood. Our focus here is on those particular nutrients found in foods that enhance neuron firing and cross-linking in the brain. The foods listed below can help you: concentrate, increase memory, tune sensorimotor skills, keep you motivated, speed up your reaction time, control stress, and even slow down the aging of brain cells! So here is a list of 20 different food types that we can add to our diet, their effects, and how they function:

Best Bodyweight Exercises for Fitness and Weight Loss Bodyweight exercises are a great way to help you lose weight. They also help to burn belly fat fast. They combine a cardiovascular workout with a muscle building workout, so burn fat while you are exercising out and also increase your metabolism as a result of muscle development. Bodyweight exercises are considered to be very “old school”, they are still promoted in martial arts classes, military fitness training and strength training for dance, sports and many other activities. Circuit training exercises are often part of a weight loss and fitness plan. One of the best things about a bodyweight workout is that you can perform most of the exercises with no equipment at all, so whether you are at home, in a hotel room, in the park or office, you can exercise when you want.