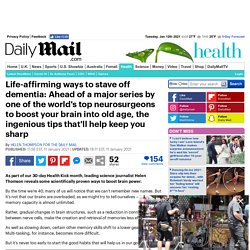 By the time we’re 40, many of us will notice that we can’t remember new names. But it’s not that our brains are overloaded, as we might try to tell ourselves — in fact, our memory capacity is almost unlimited. Rather, gradual changes in brain structures, such as a reduction in connections between nerve cells, make the creation and retrieval of memories less efficient. As well as slowing down, certain other memory skills shift to a lower gear with age. Body Groove. Even though I now travel the world teaching my revolutionary health and workout secrets, I wasn’t always so fit and healthy… In fact, for years I was always tired and frequently overweight… (Which is really ironic because at the time I was an elite fitness instructor at one of L.A.’s top gyms, teaching dozens of aerobic classes every week…) I was so desperate to look a certain way that I actually was forcing myself to vomit after I ate… It was a terrible thing to do to my body, but I felt so much pressure to be thin, and none of my regular exercise routines were helping… 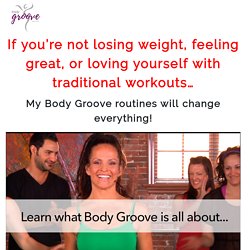 Healthy Breakfasts. Dieting. The Mediterranean Diet. Medicines and Disease. Meditation. Chocolate cake breakfast could help you lose weight. "The group that consumed a bigger breakfast, including dessert, experienced few if any cravings for these foods later in the day" Professor Daniela Jakubowicz At the end those who had consumed a 600 calorie breakfast had lost an average of 40 lbs more per person than their peers. 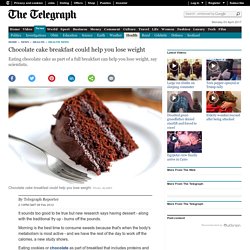 Although both groups consumed the same daily total calories - the men 1600 calories per day and the women 1400 - "the participants in the low-carbohydrate diet group had less satisfaction and felt that they were not full," said Professor Daniela Jakubowicz. Their cravings for sugars and carbohydrates were more intense and eventually caused them to cheat on the diet plan. • Chocolate: 10 health reasons you should eat more of it This also suggests that the dessert group will be more successful at keeping the weight off, said the researchers whose findings are published in journal Steroids.

And breakfast is the meal that most successfully regulates ghrelin, the hormone that increases hunger, said Prof Jakubowicz. What Eating Too Much Sugar Does to Your Brain. Does sugar make you stupid? Study suggests it sabotages learning and memory. Fructose is commonly added to processed foods such as soft drinksIt was found to hamper memory and slow brain activity By Claire Bates Published: 09:12 GMT, 16 May 2012 | Updated: 00:08 GMT, 17 May 2012 Stay off the sweet stuff: Fizzy drinks contain high amounts of fructose which slows the brain Too much sugar could be making you stupid, according to researchers. 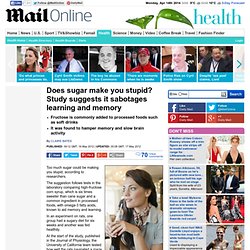 The suggestion follows tests in the laboratory comparing high-fructose corn syrup, which is six times sweeter than cane sugar and a common ingredient in processed foods, with omega-3 fatty acids, known to aid memory and learning. Berries Delay Memory Decline in Adults. “Among women who consumed two or more servings of strawberries and blueberries each week we saw a modest reduction in memory decline. 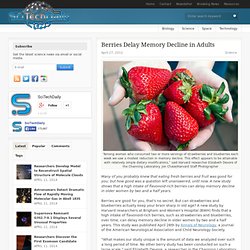 This effect appears to be attainable with relatively simple dietary modifications,” said Harvard researcher Elizabeth Devore of the Channing Laboratory. Herbs To Remove Skin Tags. Go to your kitchen and you will find a handful of easy remedies for skin tags. 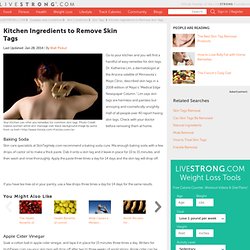 Dr. Katherine Lim, a dermatologist at the Arizona satellite of Minnesota's Mayo Clinic, described skin tags in a 2008 edition of Mayo's "Medical Edge Newspaper Column. " Lim says skin tags are harmless and painless but annoying and cosmetically unsightly. Half of all people over 40 report having skin tags. Time to ration your rashers! Can't resist a bacon sandwich? When you've read what's really in it, you may have second thoughts. By David Derbyshire Published: 22:41 GMT, 19 August 2012 | Updated: 19:38 GMT, 20 August 2012 There is something irresistible about the smell of fried bacon. 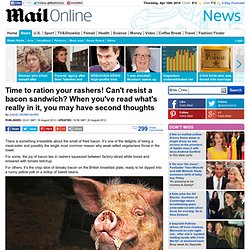 It’s one of the delights of being a meat-eater and possibly the single most common reason why weak-willed vegetarians throw in the towel. For some, the joy of bacon lies in rashers squeezed between factory-sliced white bread and smeared with tomato ketchup. For others, it’s the crisp slice of streaky bacon on the British breakfast plate, ready to be dipped into a runny yellow yolk or a dollop of baked beans. The bacon that reaches your plate might not all be from a happy, organic pig.

Why you get the dizzies when standing up too fast. Men's Health If you're seeing stars when you get out of bed in the morning, it's probably not because you slept with Halle Berry last night. 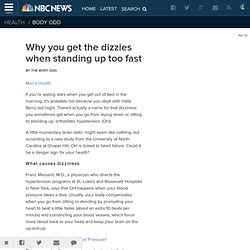 There's actually a name for that dizziness you sometimes get when you go from laying down or sitting to standing up: orthostatic hypotension (OH). A little momentary brain static might seem like nothing, but according to a new study from the University of North Carolina at Chapel Hill, OH is linked to heart failure. Could it be a danger sign for your health? How Soft Drinks Impact Your Health. ASTHMA Sodium Benzoate, found in sodas, is used as a preservative (microbial control) in foods. 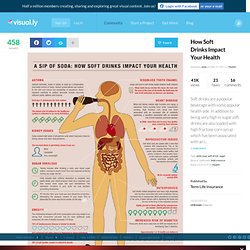 Sodium preservatives add sodium to the diet and reduce the availability of potassium. Some reported reactions to sodium benzoate include recurring urticaria (rash), asthma, and eczema Each day 11 Americans die from asthma The annual cost of asthma to the healthcare system is estimated to be nearly $18 billion DISSOLVES TOOTH ENAMEL Sugar and acid in soft drinks easily dissolve tooth enamel.

When tooth decay reaches the nerve, the root, and the area at the base of the tooth, the tooth may die and, if left untreated, an abscess can develop. Women who drink even ONE fizzy drink a day raise their risk of stroke by 80% Daily consumption significantly raises risk of ischaemic stroke - where a clot shuts off blood supply to the brain But only a very slight increase in risk for men By Pat Hagan Published: 13:13 GMT, 24 October 2012 | Updated: 13:13 GMT, 24 October 2012 Daily consumption of sugary drinks raises a woman's chances of suffering a blood clot on the brain Women who treat themselves to a fizzy drink every day may be increasing their risk of a life-threatening stroke, new research shows. 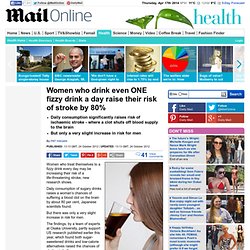 Daily consumption of sugary drinks raises a woman’s chances of suffering a blood clot on the brain by about 80 per cent, Japanese scientists found. Thousands miss the early warning signs of stroke. Three in four people admit they would not go to hospital if they experienced symptoms such as facial weaknessUp to 10,000 cases of strokes could be avoided in the UK each year, say researchers By Daily Mail Reporter Published: 06:32 GMT, 29 October 2012 | Updated: 11:33 GMT, 29 October 2012. Fat-free? How 'misleading' food labels are 'worsening obesity crisis' By Sadie Whitelocks Published: 18:11 GMT, 2 September 2013 | Updated: 15:22 GMT, 3 September 2013 Fat-free yogurt may cause greater weight gain that the full-fat kind, according to researchers behind a new $40million dollar nutrition project. Gary Taubes and Dr Peter Attia of Nutrition Science Initiative, contend that the sugars and additives added to replace missing fats, drive insulin resistance - an underlying cause of obesity.

They say this trend applies to all low-fat food options, from breakfast cereals to salad dressings, which many people 'wrongly' assume are healthier than the 'classic' versions. Don't be fooled by the label: Fat-free yogurt may cause greater weight gain that the full-fat kind, according to researchers behind a new multi-million dollar nutrition project. Study: Sleeplessness Causes Our Mental Circuits to Overheat.

Chew Yourself a Better Brain. Before You Eat That Breakfast Sandwich, Read This. Intelligence is Overrated: What You Really Need To Succeed. "Majestically Scientific" Federal Study On BPA Has Stunning Findings: So Why Is The Media Ignoring It? How your eyes can reveal you've got high blood pressure. By Angela Epstein Published: 23:50 GMT, 12 March 2012 | Updated: 23:50 GMT, 12 March 2012 Whether it’s a lack of sleep or swimming in a chlorinated pool, it’s usually obvious why your eyes are giving you trouble. But sometimes what seems a routine annoyance could point to a deeper problem. Here, Angela Epstein reveals the potential causes of your eye symptoms... Angela Epstein reveals the potential causes of your eye symptoms Cold sore: Viruses or localised infections can cause the eye to redden — the problem usually starts in one eye, but can spread to both.

Iritis: If the eye turns a deep red and you have throbbing pain at the front, this could be iritis or anterior uveitis — inflammation of the iris, the coloured part of the eye. Beetroot juice 'helps lower blood pressure': A glass a day can reduce it by 7%, say researchers. The effect is produced by beetroot's naturally high levels of nitrate High concentrations of nitrate are also found in celery and cabbage By Jenny Hope Published: 23:42 GMT, 15 April 2013 | Updated: 00:50 GMT, 16 April 2013 Drinking beetroot juice every day could help to lower blood pressure, say researchers. Why Asparagus Makes Your Urine Smell. If you’ve ever noticed a strange, not-entirely-pleasant scent coming from your urine after you eat asparagus, you’re definitely not alone.

Distinguished thinkers as varied as Scottish mathematician and physician John Arbuthnot (who wrote in a 1731 book that “asparagus…affects the urine with a foetid smell”) and Marcel Proust (who wrote how the vegetable “transforms my chamber-pot into a flask of perfume”) have commented on the phenomenon. Even Benjamin Franklin took note, stating in a 1781 letter to the Royal Academy of Brussels that “A few Stems of Asparagus eaten, shall give our Urine a disagreable Odour” (he was trying to convince the academy to “To discover some Drug…that shall render the natural Discharges of Wind from our Bodies, not only inoffensive, but agreable as Perfumes”—a goal that, alas, modern science has still not achieved).

But modern science has, at least, shed some light on why this one particular vegetable has such an unusual and potent impact on the scent of urine. Asparagus - the trendy vegetable that also 'fights diabetes' Two glasses of wine a day for middle-aged adults 'makes your life better' Those who drink in moderation have score better for on index measuring dexterity, emotion, and mobility By Daily Mail Reporter. Why drinking red wine helps keep pensioners steady on their feet. Researchers discover broccoli could suppress growth of breast cancer tumours. Ignore the finger-waggers. You SHOULD go to work on an egg! By Joanna Blythman Published: 22:43 GMT, 11 April 2013 | Updated: 06:35 GMT, 12 April 2013 New evidence: This week, scientists have declared that eggs are, in fact, a health food, packed with nutrients and proteins Another week, another humiliating blow for the healthy eating lobby.

Processed meat 'to blame for 1 in 30 deaths': Scientists say a rasher of cheap bacon a day is harmful. How PTSD took over America. In the past 30 years, post-traumatic stress disorder has gone from exotic rarity to omnipresent. Why you shouldn't lie-in once you're retired - too much sleep 'can bring on dementia' Is your laptop making you depressed? Bright screens at night could trigger the condition. Mice exposed to light more regularly than they would on a natural cycle exhibited depressive behaviourScientists say mice and humans share the same brain pathways that activate in response to lightExperts conclude 'we should switch on fewer lamps and stick to less-intense light bulbs' in the evenings. Health community, health information, medical questions, and medical apps.

Are tummy bugs the secret to a long life? Why we should all go nuts for nuts.