Dairy. Meat. Info, nutrients, guides etc sites. Nutrition for pregnancy, breastfeeding and children. Recipes. Lifespans. Diseases, infections and drugs. Nutrition studies. Evolution, anatomy, physiology and diet. Benefits of Vegan. How the Potato Changed the World. Industry Influence on Our Dietary Guidelines. The story behind the first U.S. dietary guidelines explains why, to this day, the decades of science supporting a more plant-based diet have yet to fully translate into public policy. 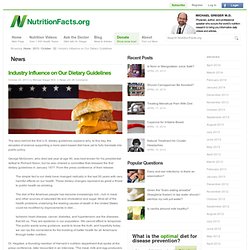 George McGovern, who died last year at age 90, was best known for his presidential defeat to Richard Nixon, but he also chaired a committee that released the first dietary guidelines in January 1977. From the press conference of their release: The simple fact is our diets have changed radically in the last 50 years with very harmful effects on our health. These dietary changes represent as great a threat to public health as smoking. The diet of the American people has become increasingly rich –rich in meat and other sources of saturated fat and cholesterol and sugar. Ischemic heart disease, cancer, diabetes, and hypertension are the diseases that kill us. Dr. Tips to Extend the Shelf Life of Fruits and Vegetables. July 29, 2010 | 85,974 views Share Americans throw out 14 percent of the food they buy -- and that's before factoring in the leftover food you scrape from your plate. 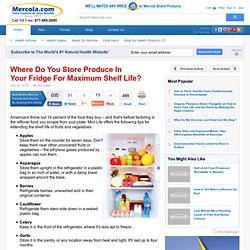 Mint Life offers the following tips for extending the shelf life of fruits and vegetables: Apples Store them on the counter for seven days. Don't keep them near other uncovered fruits or vegetables -- the ethylene gases produced by apples can ruin them. For the complete list, please see the Source link below. Eustace Mullins. 5 Well-Known Tips for Healthy Eating (That Don't Work) Considering that eating is the basic building block of survival, you'd think we'd pretty much have it down by now, yet it's hard to find a subject more prone to bullshit and misinformation than the question of what constitutes a healthy diet. 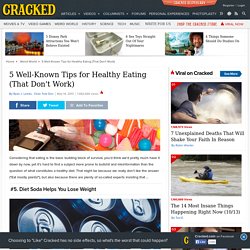 That might be because we really don't like the answer ("Eat mostly plants! "), but also because there are plenty of so-called experts insisting that ... #5. Diet Soda Helps You Lose Weight NA/AbleStock.com/Getty Images The Myth: Nobody truly likes artificial sweeteners, but they're an accepted evil, because how else can you replace all the sinks in your home with soda fountains without feeling guilty? George Doyle/Stockbyte/Getty Images"It's like opening a can of freedom!

" The Reality: Scientists noticed a strange trend: People who drink diet soda do not in fact lose any weight. Vegan- is it dogma or how humans are really meant to eat? #224. How to "Reboot" Your Brain so that Healthy Eating is Preferred. Adopting a health-promoting diet in the modern world is among the most difficult challenges facing humans living in industrialized societies. 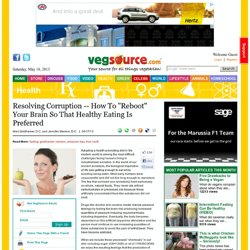 In the world of our ancient ancestors, the biological imperative of life was getting enough to eat while avoiding being eaten. Most early humans were unsuccessful and did not live long enough to reproduce. The few that survived (our ancestors) lived exclusively on whole, natural foods. Has it been Proven that a Vegetarian Diet is Really Healthier? The short answer is a resounding yes; it has been conclusively proven through extensive worldwide studies by independent, highly respected international health advisory boards that a vegetarian diet is significantly healthier than one which includes meat and animal products. 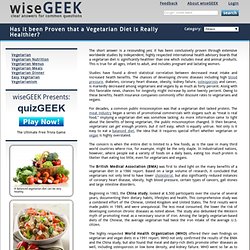 This is true for all ages, infant to adult, and includes pregnant and lactating women. Studies have found a direct statistical correlation between decreased meat intake and increased health benefits. The chances of developing chronic diseases including high blood pressure, diabetes, coronary heart disease, obesity, kidney failure, osteoporosis and cancer, is markedly decreased among vegetarians and vegans by as much as forty percent. Along with this favorable news, chances for longevity might increase by some twenty percent. Owing to these benefits, health insurance companies commonly offer discount rates to vegetarians and vegans. _TRS_916.pdf (application/pdf Object) Eat for Life VLC (#7) Natural Cures Good Health Article Sore Throat Cures. Video: "Plant-Only Medicine Man" - Dr. Michael Klaper - DoctorKlaper.com. How the ethical argument fails veganism. Okay, please excuse the incendiary title of this article. 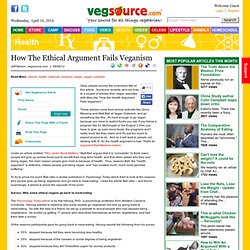 Someone recently sent me links to a couple of articles from vegan websites with titles like "How the Health Argument Fails Veganism. " These articles come from animal activists like Ginny Messina and Matt Ball at Vegan Outreach, and go something like this: It's hard enough to go vegan because you have to restrict foods you eat, if you follow a program like Dr. McDougall or the Engine 2 Diet, you have to give up even more foods, the programs don't really work like they claim, and it's just too much to expect anyone to do. And so it will lead to people not sticking with it! So the health argument is bad. Under an article entitled “Why Jack's Book Matters,” Matt Ball argues that it is “unrealistic” to think many people will give up animal foods just to benefit their long-term health, and that when asked why they quit being vegan, the main reason people give most is because of health.