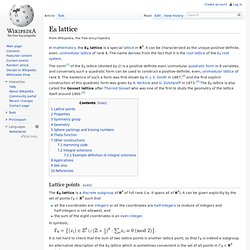 The existence of such a form was first shown by H. J. S. Smith in 1867,[2] and the first explicit construction of this quadratic form was given by A. Korkine and G. Lattice points[edit] Eisenstein prime. Small Eisenstein primes. 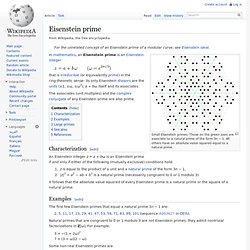 Those on the green axes are associate to a natural prime of the form 3n − 1. All others have an absolute value squared equal to a natural prime. Euler's totient function. The first thousand values of In number theory, Euler's totient or phi function, φ(n), is an arithmetic function that counts the totatives of n, that is, the positive integers less than or equal to n that are relatively prime to n. 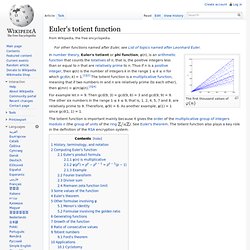 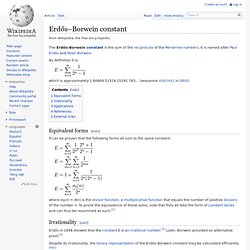 Equivalent forms[edit] It can be proven that the following forms all sum to the same constant: Palindromic prime. A palindromic prime (sometimes called a palprime) is a prime number that is also a palindromic number. 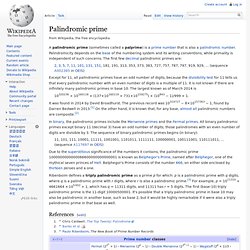 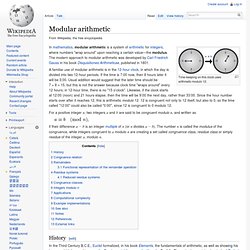 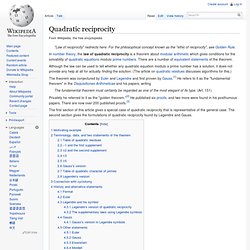 There are a number of equivalent statements of the theorem. Although the law can be used to tell whether any quadratic equation modulo a prime number has a solution, it does not provide any help at all for actually finding the solution. (The article on quadratic residues discusses algorithms for this.) The theorem was conjectured by Euler and Legendre and first proven by Gauss.[1] He refers to it as the "fundamental theorem" in the Disquisitiones Arithmeticae and his papers, writing The fundamental theorem must certainly be regarded as one of the most elegant of its type. 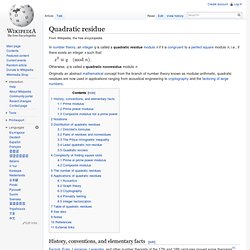 Originally an abstract mathematical concept from the branch of number theory known as modular arithmetic, quadratic residues are now used in applications ranging from acoustical engineering to cryptography and the factoring of large numbers. History, conventions, and elementary facts[edit] Fermat, Euler, Lagrange, Legendre, and other number theorists of the 17th and 18th centuries proved some theorems[1] and made some conjectures[2] about quadratic residues, but the first systematic treatment is § IV of Gauss's Disquisitiones Arithmeticae (1801). Article 95 introduces the terminology "quadratic residue" and "quadratic nonresidue", and states that, if the context makes it clear, the adjective "quadratic" may be dropped.