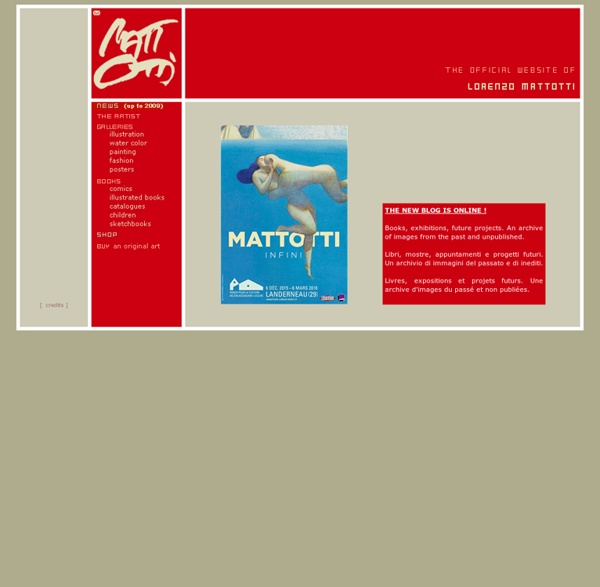 Paper View (4): Mattotti In the Paper View series we watch people draw. Today, we’ve got a big shot: Italian maestro of comics Lorenzo Mattotti! I’m a big fan of Mattotti. I love his color work (mostly crayons and pastels) but every now and again he goes completely black and white. Some of his very best comics he made like that (the somewhat under-appreciated “Stigmates” for instance), and in this video he once again goes for the starkest black on white. Frontier Legacy print by sketchboy01 Poster #10 in my "Nouveau Robotica" series of art prints. The series is an amalgam of the Art Nouveau/Mucha style and modern technology/culture, most often involving robots~ This Good/Bad/Ugly homage features a roboticized Eastwood among Western details and motifs.

Painting Berg began painting at an early age, on her seventh birthday she received her first paint set. Despite coming a long way since then she still feels there is room for progression. According to her, painting is like a mountain : the more you climb the further away the peak seems. This explains her choice of name 'Berg,' which is German for mountain. After her studies at the school of Fine Arts in Tours, Berg specialized in ancient painting techniques. She began her career as a copyist in major museums like the Louvre, the Museum of Ancient Art in Brussels, then she created Artemisia, a training centre for copyists. 4CP: Color Process Erotica Yes: erotica! And no, I’m not kidding. I think these picture are extremely sensuous. And I think the people behind the 4CP-site have the same idea. Listen to this: Dots emit radiation.

February 2012 Jon Whitcomb, the king of American glamour illustration in the 1950s, shares his step-by-step method for how to paint a head in transparent wash: Step 1. “Over softly penciled outlines, Whitcomb paints a light gray tone, which begins to establish the shadow area of his picture. After this has dried completely, he paints a medium gray tone over it, but stops short of the edge of the first wash. 10 things to remember when pitching to SelfMadeHero SelfMadeHero is heading North for Thought Bubble Festival! We’re looking forward to what has quickly become a much-looked-forward-to fixture in the SelfMadeHero convention calendar. Many creators who have worked with us or are working with SelfMadeHero at the moment will be there on Saturday. I mean, just look at all the banners (that I’ve shamelessly pulled from the Thought Bubble site and placed throughout this post)! The writing powerhouse behind SelfMadeHero's Sherlocks (not to mention the odd Poe, Lovecraft or Wilde tale).

lindsey olivares Happy late mothers day to all the mothers out there. I'm sharing something I made for my mother aka MOMO. I wanted to illustrate various momo and me memories. Some of these are family jokes, and some are just memories. I was at that age when you first start to use the bathroom on your own and I was very proud of using the public McDonalds bathroom all by myself.

Joann Sfar: Gainsbourg I recently saw the film “Gainsbourg: Vie Héroïque” by Joann Sfar. I know, I know… it’s been out for a while now, but I really really liked it a lot, so I just had to make a post about it… Joann Sfar is of course a well known French comics author. Frank Chimero - Info Frank Chimero is a designer, illustrator, and writer. His practice focuses on design systems that bridge digital and analog formats, using the qualities of each to the other’s advantage. This method also extends to his personal work and publishing projects. In 2011, he was honored with the Art Directors Club Young Guns award and featured in Print Magazine’s New Visual Artist issue, highlighting twenty designers under the age of thirty. As a teacher, Frank worked with undergraduates at Portland State and Missouri State University, and taught typography, design systems, information design, and thesis courses. He also taught thesis development at SVA’s MFA in Interaction Design program.