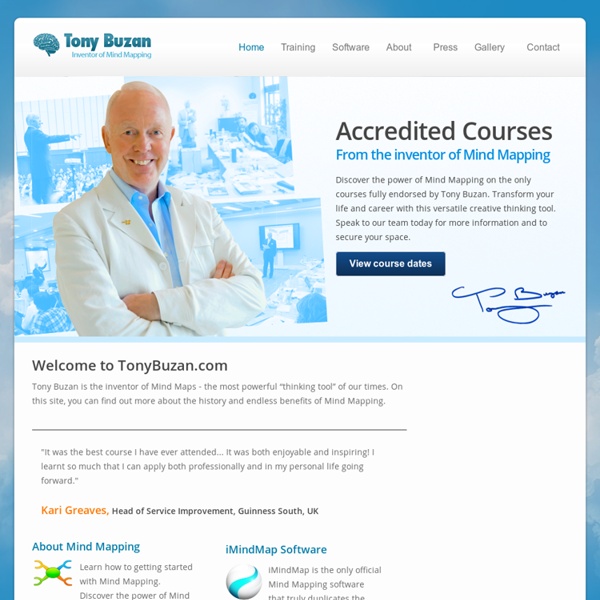 The Psycho-Educational Teacher: Helping Students with Recurrent Behavior Problems Capture Your Flag - Career Learning and Development Video Interviews How to Mind Map FREE Online eLearning Program Download iPad App Learn to capture information and ideas with the technique that is helping over 250 million people worldwide to be more organised, productive and creative. Mind Mapping is a method of capturing information created by international speaker and bestselling author, Tony Buzan. This versatile technique is already used by over 250 million people worldwide for a variety of tasks including brainstorming, identifying new opportunities, organising, managing projects, teaching, studying, communicating information and much more… with iMindMap software from Tony Buzan Practise your technique with Mind Mapping software from the inventor himself. Download a Free Trial A Mind Map is a visual thinking tool that can be applied to all cognitive functions, especially memory, learning, creativity and analysis. Mind Maps can be drawn by hand or using software such as iMindMap. Steps to creating a Mind Map Step 1. Step 2. Step 3. Step 4. Step 5. View Finished Mind Map

Steve Jobs Steals The Show On Apple's Earnings Call Apple crushed revenue and earnings estimates, as expected, and the company's guidance looks strong for its holiday quarter. But the iPad business posted a huge miss: 4.19 million shipments versus the Street's consensus at 4.7 million and many estimates above 5 million. On the earnings call, Apple hinted that this was at least in part a supply issue, noting that supply and demand weren't balanced until September, the last month of the quarter. Steve Jobs stole the show on the call, trashing competitors like RIM and Google, and suggesting that the iPad and iPhone will win against rivals because they are better products at great prices. Jobs also said the company is holding onto its cash -- more than $50 billion now -- mostly in case a big strategic opportunity comes along. Steve Jobs also announced that Apple has already sold more than 250,000 of the new Apple TV device. Key Stats: LIVE Conference call notes follow. 4:57 Waiting for call to begin. 5:03 Call begins. 5:32 Future of iPad?

Mind Mapping | Tony Buzan What is a Mind Map? A Mind Map is a powerful graphic technique which provides a universal key to unlock the potential of the brain. It harnesses the full range of cortical skills – word, image, number, logic, rhythm, colour and spatial awareness – in a single, uniquely powerful manner. In so doing, it gives you the freedom to roam the infinite expanses of your brain. A Mind Map can be applied to every aspect of life where improved learning and clearer thinking will enhance human performance. What do you need to make a Mind Map? Because Mind Maps are so easy to do and so natural, the ingredients for your “Mind Map Recipe” are very few: Blank unlined paperColoured pens and pencilsYour BrainYour imagination! When you use Mind Maps on a daily basis, you will find that your life becomes more productive, fulfilled, and successful on every level. 7 Steps to Making a Mind Map Start in the CENTRE of a blank page turned sideways. iMindMap – our recommended Mind Mapping software Learn more

Global Futures Studies & Research by The Millennium Project Computers & Mobile News, Projects, How-Tos and More For those who've longed for a Star Trek-style holodeck of your own — the future is here. castAR is an augmented reality system that brings the idea within reach. Designed by Rick Johnson and Jeri Ellsworth of Technical Illusions, castAR bridges the gap between the physical world and the virtual world by combining projected augmented reality, true virtual reality, and true augmented reality in a single system. Last fall, it earned over a million dollars on Kickstarter, more than double its $400k goal. While wearing the castAR glasses, the effect is pretty nifty: I played a multiplayer zombie game that is projected on a real table top. Outside of games, the potential applications for this type of technology are plentiful. I stopped by the castAR tent at Maker Faire Bay Area 2014, where they were demoing an Asteroids-style game, a multiplayer zombie game, and a 3D rendering of what your 3D print will look like — projected inside the 3D printer, as it's printing.