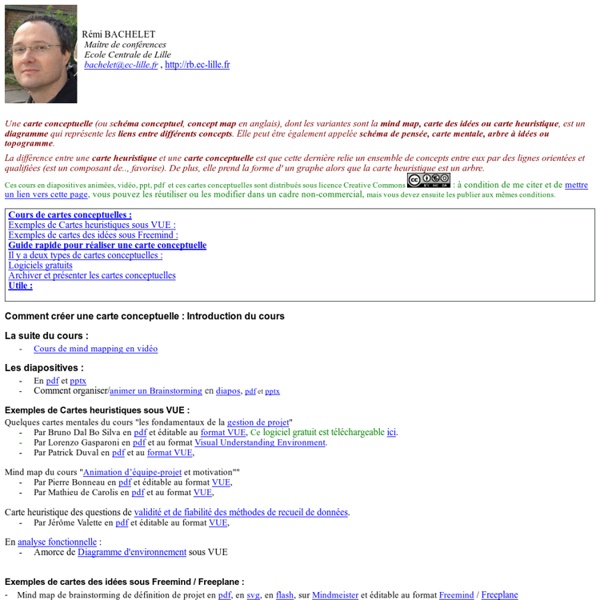 A Comparison between Concept Maps, Mind Maps, Conceptual Diagrams, and Visual Metaphors as Complementary Tools for Knowledge Construction and Sharing Martin J Eppler1 ↵Faculty of Communication Sciences, University of Lugano (USI), Lugano, Switzerland. Tel.: 058 666 45 12 Fax: 058 666 46 47. E-mail: martin.eppler@lu.unisi.ch In this article, Novak's concept mapping technique is compared to three other types of visualization formats, namely mind maps, conceptual diagrams, and visual metaphors. 8 Free Mind Map Tools & How to Best Use Them Advertisement Here’s the good news. Finally, we can be like Leonardo da Vinci’s in one small way. No, we are not getting his polymathic superpowers. His penchant for taking free-flowing notes that filled notebooks with diagrams and scribblings is more achievable.

Best Supercomputers Still Not Best for Big Data This week, China reclaimed the distinction of running the world’s fastest supercomputer; it last held that first-place ranking for eight months starting in October 2010 with its Tianhe-1A machine. Its new Tianhe-2 (“Milky Way–2”) computer is putting its competition to shame, however, performing calculations about as fast as the most recent No. 2 and No. 3 machines combined, according to Jack Dongarra, one of the curators of the list of 500 most powerful supercomputers and professor of computer science at the University of Tennessee, Knoxville. Murphy chairs the executive committee of an alternative supercomputer benchmark called Graph 500. Named for the mathematical theory behind the study of networks and numbered like its long-established competitor, Top500, Graph 500 quantifies a supercomputer’s speed when running needle-in-a-haystack search problems. It’s no mark against the Tianhe-2’s architects that a No. 1 ranking in Top500 doesn’t yield the highest Graph 500 score too.

100 Reasons to Mind Map 100 examples of how you can use mindmapping whether completely new to mind maps or a seasoned pro. I hope the list helps generate ideas for you. 100 Reasons to Mind Map 1. Explore a subject 2. Study & learn a new topic, culture or country 3. Mind Mapping, Mindmaps and Mind Maps Mind mapping is a revolutionary tool used for creating, thinking, organizing, note taking and brainstorming. The modern iteration of mind mapping is claimed to have been created by Tony Buzan – but who really knows. If anything, credit definitely goes to Tony for popularizing the method and bringing it to the masses. Here at Asian Efficiency, we like to think of ourselves as avid users of mindmapping, rather than “certified experts”. We use mind mapping for all sorts of things in our daily lives, and we want to share some of that with you.

How People Learn How People Learn Joseph D. Novak & Alberto J. Cañas Institute for Human and Machine Cognitionwww.ihmc.us This document is part of the Cmappers.Learn section of www.cmappers.net. Visit the site to learn more about concept mapping. Web sites and mind maps - WikIT If you plan and design web sites, mind maps can provide a useful platform because of the ease with which they display structure and links. Websites rarely adopt a pure tree hierarchy however, so the capabilities of concept mapping software can also be useful. Planning web sites[edit] Writing content in context[edit] Building web sites[edit]

Gamification By now you’ve likely heard about gamification in business, specifically how it’s meant to engage customers and boost employee productivity. Many places are treating gamification like a magic wand, able to cure all of a company’s ills while increasing revenues. This might be overstating its effect, but gamification can still have a positive impact on a business, which is why so many organizations are jumping on the bandwagon.