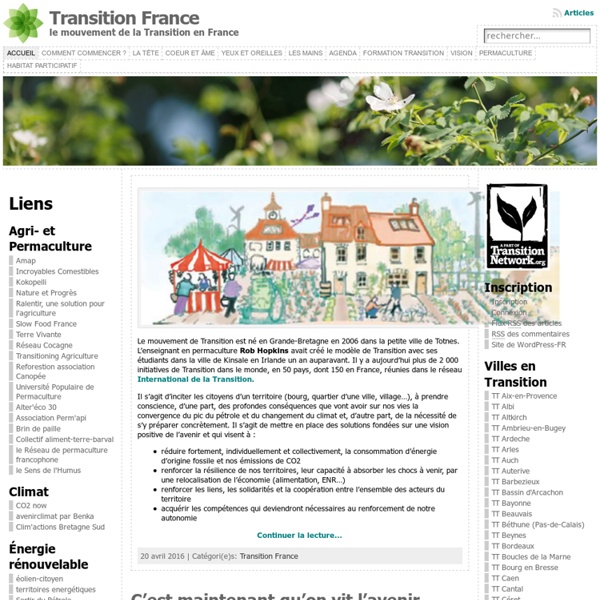 Island in the sun: Why are our cities heating up faster than everywhere else? There are hot islands, there are really hot islands, and then there are urban heat islands [PDF] — cities that are hotter, often considerably, than their more rural surrounds. Sound a little strange? Well, you can tell your foil hat-wearing, climate-denying friends it’s nothing new, having been documented as far back as 1810. Simply put, cutting down all the trees, paving over every inch of earth, burying streams in storm drains, and building enormous structures warms things up a bit. Some may like it hot, but the good folks of Louisville, Ky., will tell you that it’s not always a good thing. Cursed with often stagnant wind conditions, a dense urban center, and fewer trees than Paul Bunyan’s backyard, Louisville has seen temperatures rise 1.67 degrees F every decade since 1961.

German ′Transition Towns′ ride wave of change The water simply won't boil. No surprise really. The pot is far too large for the small camping stove. Cornelia Dorsch takes off the lid to check whether she can add the vegetables yet. She's standing in front of a makeshift table on Servatii Square, where she's about to serve free soup to passersby. Reinterpreting Green Space in cities This post is also available in: Chinese (Traditional) ‘A product of the creative encounter between the man-made and the natural, between order and disorder, the garden can offer productive metaphors for the interactions between human life and time, care, thought or space.’ The fate of the city garden has been featured on This Big City in the past.

Richard M. Daley wants to make your city more sustainable Richard M. Daley, who served six terms as mayor of Chicago from 1989 to 2011, was one of the first big-city mayors to focus on sustainable development. Some of his projects, such as the development of Millennium Park, flourished. Others are more likely to be remembered as flops — Chicago taxpayers may lose money on a solar-power deal Daley negotiated, and his administration spent millions of dollars on recycling initiatives that went nowhere. cohousing cultures CoHousing Cultures: self-organized, community-oriented and sustainable. Integrating, non-speculative and open to the neighborhood. Innovative projects motivated by a search for ecological, affordable and socially designed homes. This book illustrates a colorful diversity of European examples including a cooperative’s barrier-free renovation of an old school in Berlin, collective housing for the 40+ generation in Stockholm and passive architecture planned by and for immigrants in Brussels. Become active! A contact list offers tips for further research.

Imagining an Elastic City Planters and urban gardening tools at Kennedy Greenway in central Boston, the site of the Occupy Boston encampment. Last spring, after attending a panel about urbanism in Mumbai, I wrote a blog post about what I called the "entropic city" — one that is constantly changing and re-imagining itself. “Entropy,” I argued, “is a cultural and an economic necessity. How Cities and Wildlife Can Be Friends Instead of Enemies We generally think of cities as devoid of nature. These crowded, homogenized, noisy environments seem to be the exact opposite of natural, and we’re correct in surmising that their creation is detrimental to wild species. “We paved paradise and put up a parking lot,” as the song goes. But recent research suggests that while it may not be her first choice, Mother Nature’s adaptation skills make it possible for cities and wildlife to coexist, and even flourish. Charles Nilon, a professor of fisheries and wildlife at the University of Missouri, recently published a study which found that while urbanization is hurting overall biodiversity, certain birds and plants thrive in cities. The results of this study suggest that paying more attention to the way we design and develop our urban areas could encourage a more symbiotic relationship between humans and the flora and fauna.

Housing Prototypes: Collective House Street facade, detail. Sven Markelius was an important member of the Stockholm architectural avant-garde in the 1930's. Along with Gunnar Asplund and others, Markelius was instrumental in bring the ideology of Modern Architecture to Sweden as one of the authors of the Functionalist manifesto acceptera, published in 1931. Markelius also socialized with a group of radical Social Democrats who shared an interest in the new architecture and a new social order. Q&A with Chiara Camponeschi « Enabling Suburbs Chiara Camponeschi is author of The Enabling City and works at the intersection of interdisciplinary research, social innovation and urban sustainability. 1. What do you think are the most difficult challenges, contradictions and opportunities facing suburbs and their communities, or Aspley/your suburb and its community? Suburbs are particularly vulnerable places.

How did Vancouver get so green? Vancouver is supremely green, in both senses of the word. Set between ocean and mountains and lined with verdant trees, Vancouver also has the lowest greenhouse gas emissions of any major city in North America. In 2007, the most recent year for which comparisons are available, Vancouver had annual emissions of 4.9 tons of CO2 equivalent per capita. By 2012, according to Vancouver’s city government, it had dropped to 4.4 tons per person. Cohousing Now: Home – in Swedish Kollektivhus NU – is an association working to promote collaborative housing and other alternative ways of living. The association supports existing co-housing units as well as groups intending to create new units. Originally formed in 1981, it has recently been revitalised with the prime purpose to inform the public about cohousing as an alternative, and to influence authorities to facilitate the creation and running of such units. "Kollektivhus NU currently has 42 cohousing units as full members, and 15 organisations working in favour of collaborative housing.