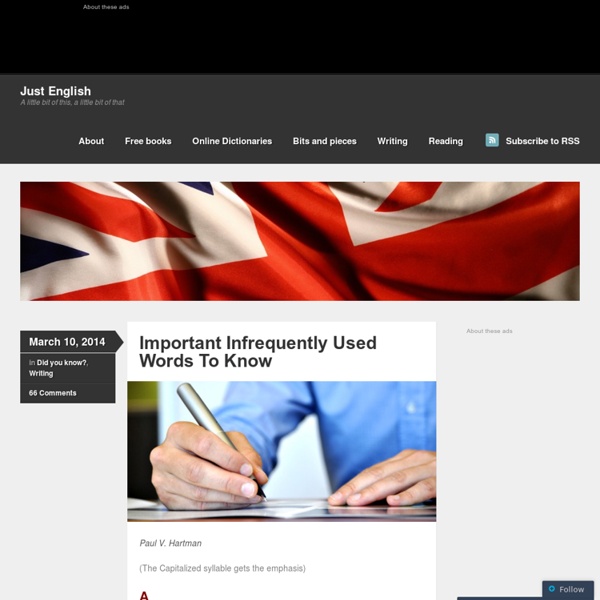 Paul V. Hartman (The Capitalized syllable gets the emphasis) alacrity a-LACK-ra-tee cheerful willingness and promptnessanathema a-NATH-a-ma a thing or person cursed, banned, or reviledanodyne AN-a-dine not likely to cause offence or disagreement and somewhat dull//anything that sooths or comfortsaphorism AFF-oar-ism a short, witty saying or concise principleapostate ah-POSS-tate (also: apostasy) person who has left the fold or deserted the faith.arrogate ARROW-gate to make an unreasonable claimatavistic at-a-VIS-tic reverting to a primitive typeavuncular a-VUNC-you-lar “like an uncle”; benevolent bathos BATH-ose an anticlimaxbereft ba-REFT to be deprived of something valuable “He was bereft of reason.” cynosure SIGH-na-shore (from the Greek: “dog’s tail”) center of attention; point to which all eyes are drawn. dilettante DILL-ah-tent 1. having superficial/amateurish interest in a branch of knowledge; 2. a connoisseur or lover of the fine arts Click to read: Image courtesy:

How to Write with Style: Kurt Vonnegut’s 8 Keys to the Power of the Written Word Find a Subject You Care About Find a subject you care about and which you in your heart feel others should care about. It is this genuine caring, and not your games with language, which will be the most compelling and seductive element in your style. I am not urging you to write a novel, by the way — although I would not be sorry if you wrote one, provided you genuinely cared about something. A petition to the mayor about a pothole in front of your house or a love letter to the girl next door will do. Free Online Dictionary of Unusual and Weird Words: International House of Logorrhea Dictionary of Unusual Words logorrhea log-uh-RI-uh, n an excessive flow of words, prolixity [Gr logos word + roia flow, stream] Welcome to the International House of Logorrhea, a free online dictionary of weird words and unusual words to help enhance your vocabulary. The IHL is a component of The Phrontistery, which has many other free word lists and resources related to obscure words. Did you ever have an English teacher who told you 'Whenever you read something, and find an odd word you don't know, look it up in the dictionary and write it down'? Well, I took that advice to heart.

Data Mining Novels Reveals the Six Basic Emotional Arcs of Storytelling Back in 1995, Kurt Vonnegut gave a lecture in which he described his theory about the shapes of stories. In the process, he plotted several examples on a blackboard. “There is no reason why the simple shapes of stories can’t be fed into computers,” he said. “They are beautiful shapes.” Top 100 Inspirational Quotes Inspirational Quotes by Henry David Thoreau 1. A man is rich in proportion to the number of things he can afford to let alone. 2. None are so old as those who have outlived enthusiasm. Unusual Words Unusual Words A by no means exhaustive list of rare, obscure, strange and sometimes funny words and their meanings that only seem to crop up in crosswords and dictionaries. Words that are used so seldom, you wonder who invented them and why. Home ~ The Stories ~ Diversions ~ Links ~ Contact

Kids explain how banned and challenged books helped them and even saved their lives / Boing Boing By Joan Bertin and Millie Davis Banned Books Week has come and gone but we can be sure of one thing: the coming year will be marked by challenges to the same kinds of books that were controversial this year, and in years past. report this ad Controversies over what books are taught in class or shelved in the school library typically start when an adult—usually a parent or community member—feels that a book selected by teachers and librarians is inappropriate, offensive or objectionable. Most often, the objections relate to sexual scenes, offensive language, or depictions of drug and alcohol use. Animal Rights Quotes, Sayings about Animal Welfare, Cruelty, Compassion Related Quotes Animals Civil Disobedience Integrity Vegetarianism Ask the experimenters why they experiment on animals, and the answer is: "Because the animals are like us." Ask the experimenters why it is morally okay to experiment on animals, and the answer is: "Because the animals are not like us." Animal experimentation rests on a logical contradiction.