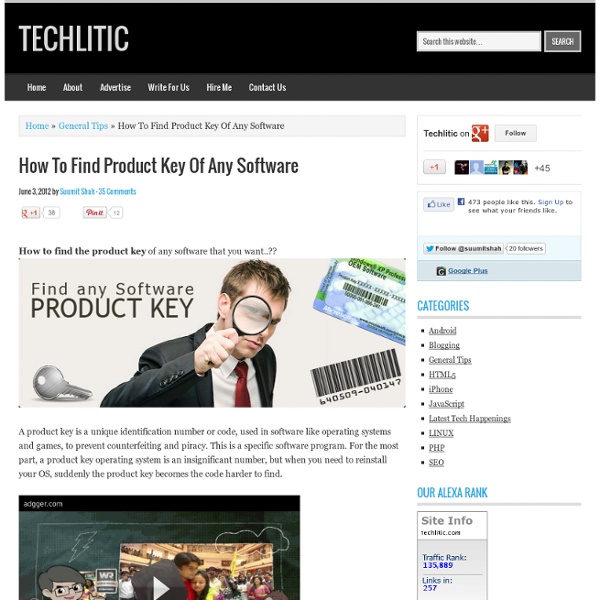 50 Places You Can Learn to Code (for Free) Online If you’re curious about learning a programming language then you’re in luck: there’s no shortage of resources for learning how to code online. University-level courses, tutorials, cheat sheets, and coding communities all offer excellent ways to pick up a new language, and maybe even a new job, too. Read on, and you’ll discover 50 great places to learn how to code, for free, online. University Many big names in education including MIT and Stanford offer programming courses, absolutely free. General 15 Classic Cars That Define Cool This post is brought to you by NEW Armor All Extreme Shield Wax. Come to Facebook.com/ArmorAll for a chance to win a new 2012 Chevy Camaro SS autographed by Tony Stewart. We’ve overheard guys say they don’t care what kind of car they drive as long as it gets them from Point A to Point B. Those guys are liars. Who wouldn’t want to own a car that turns more heads than a bikini car wash?

A Beginner's Shopping List: Quality Food For The Best Results! SimplyShredded.com Fitness Diva: Cover Model Bella Falconi Talks ... WBFF Pro World Champion & Fitness Model ... Simple animation to explain complex principles 1, aircraft radial engine 2, oval Regulation 3, sewing machines 4, Malta Cross movement - second hand movement used to control the clock How to Build a Universe That Doesnt Fall Apart Two Days Later First, before I begin to bore you with the usual sort of things science fiction writers say in speeches, let me bring you official greetings from Disneyland. I consider myself a spokesperson for Disneyland because I live just a few miles from it — and, as if that were not enough, I once had the honour of being interviewed there by Paris TV. For several weeks after the interview, I was really ill and confined to bed. I think it was the whirling teacups that did it. Elizabeth Antebi, who was the producer of the film, wanted to have me whirling around in one of the giant teacups while discussing the rise of fascism with Norman Spinrad... an old friend of mine who writes excellent science fiction.

Learning How to Code Has Never Been Easier Programming isn’t just a niche specialization anymore, rather a necessity for tech-professionals regardless of the industry in which they work. Thankfully for them, it couldn’t be any easier.As such, there’s a big push lately to make coding literacy more widespread among the general populace. Even Mayor Bloomberg is getting in on the act, pledging to learn basic coding in 2012 as his New Year’s resolution. For those who want to learn to code, there are a number of online school coding programs that can guide them through the process. The main players are Codecademy, Team Tree House and Code Year, each with their own strengths, weaknesses and selling points—all who make it easy.

How Famous Companies Got Their Names Ever wondered about how famous brands got their names from? Here are a couple of explanations. Via How to Groom and Shave Your Beard: Grooming For years, the clean-cut man-boy was ruling the runway. Parted hair, waifish waist, skin smooth as a Botoxed three-year-old. Then a gritty crew rolled in and changed the game. With it, the beard invasion began. Whether we're talking about a thick, irreverent Galifianakis or a jawline-amping mown lawn, a beard is just about the most on-trend accessory you can pull on this season. Photography Selection of #surreal pictures, featuring creative #levitations, dreamscapes, portraits. Continue reading The Cologne Cathedral captured in a crystal ball by Vivien J-Dora Continue reading

AN EVOLUTIONARY REASON TO GIVE UP Evolutionary predisposition is the analysis du jour when describing all of human behaviour. These days everything we do--from appreciate music to donate to charity--evidently boils down to our desire to lure a mate and make many babies. Now it seems a scientific study has proven an evolutionary reason for depression: Dr [Randolph] Nesse’s hypothesis is that, as pain stops you doing damaging physical things, so low mood stops you doing damaging mental ones—in particular, pursuing unreachable goals. Pursuing such goals is a waste of energy and resources. Therefore, he argues, there is likely to be an evolved mechanism that identifies certain goals as unattainable and inhibits their pursuit—and he believes that low mood is at least part of that mechanism.

university lectures computer science Whether your goal is to earn a promotion, graduate at the top of your class, or just accelerate your life, lectures can help get you there. Our archives of lectures cover a huge range of topics and have all been handpicked and carefully designed by experienced instructors throughout the world who are dedicated to helping you take the next step toward meeting your career goals. Lifelong learns can turn their free time turn into self-improvement time. The online lectures on this list are more than lecture notes or a slideshow on a topic -- they were designed for audiences like you, with carefully sequenced themes and topics taught by veteran educators, and often with additional resources for your own independent study. The lectures are available to anybody, completely free of charge. Lecture courses are a valid and vital learning tool, and may be one of the best methods of learning available.