How to Search Google Like a Pro: 11 Tricks You Have to Know 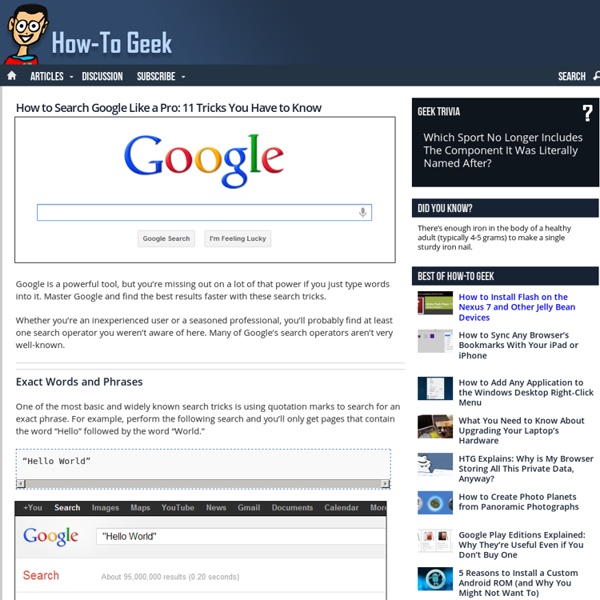 Google is a powerful tool, but you’re missing out on a lot of that power if you just type words into it. Master Google and find the best results faster with these search tricks. Whether you’re an inexperienced user or a seasoned professional, you’ll probably find at least one search operator you weren’t aware of here. Many of Google’s search operators aren’t very well-known. Exact Words and Phrases One of the most basic and widely known search tricks is using quotation marks to search for an exact phrase. “Hello World” This same method now works for exact-word queries. “mining” Excluding a Word The minus sign allows you to specify words that shouldn’t appear in your results. linux distributions -ubuntu Site Search The site: operator allows you to perform a search in a specific site. site:howtogeek.com windows 7 You can also use the site: operator to specify a domain. Related Words ~geek Apparently, “Linux” is the most similar word to geek, followed by “Greek.” The Wildcard Time Ranges File Type

Open Source Intelligence Techniques Live Events Online Resources Blog Podcast Books Contact 5 Places to Look for Your Digital Footprint Recently, many iPhone and iPad users were incensed to learn that Siri — the personal digital assistant for iOS devices — has an eerily long memory. Unbeknownst to Apple customers, Siri sends all your queries directly to Apple's company’s servers, where it is kept for two years before being deleted. And while the truth about Siri is making headlines, it's not really shocking. Data retention policies have been aggravating Internet and cellphone users for years now. Intelligence Gathering - The Penetration Testing Execution Standard This section defines the Intelligence Gathering activities of a penetration test. The purpose of this document is to provide a standard designed specifically for the pentester performing reconnaissance against a target (typically corporate, military, or related). The document details the thought process and goals of pentesting reconnaissance, and when used properly, helps the reader to produce a highly strategic plan for attacking a target. Background Concepts Levels are an important concept for this document and for PTES as a whole.

Automating OSINT Blog Free Python Webinar Sign up for one of my free Python webinars where I teach you the basics in an hour or less. Click here to register now, it’s 100% free. Python Course – $49.99 Online Penetration Testing Tools About this tool 'Find Subdomains' allows you to discover subdomains of your target domain and increase your attack surface. Finding subdomains is useful in a penetration test because they point to different applications and indicate different external network ranges used by the target company.

Social Network Analysis Reveals Full Scale of Kremlin’s Twitter Bot Campaign Profile pictures from a large network of pro-Kremlin Twitter accounts. Image by Lawrence Alexander. With the aid of open-source tools, Internet researcher Lawrence Alexander gathered and visualised data on nearly 20,500 pro-Kremlin Twitter accounts, revealing the massive scale of information manipulation attempts on the RuNet. In what is the first part of a two-part analysis, he explains how he did it and what he found. RuNet Echo has previously written about the efforts of the Russian “Troll Army” to inject the social networks and online media websites with pro-Kremlin rhetoric. Twitter is no exception, and multiple users have observed Twitter accounts tweeting similar statements during and around key breaking news and events.

Mapping Twitter Topic Networks: From Polarized Crowds to Community Clusters Polarized Crowds: Political conversations on Twitter Conversations on Twitter create networks with identifiable contours as people reply to and mention one another in their tweets. These conversational structures differ, depending on the subject and the people driving the conversation. Six structures are regularly observed: divided, unified, fragmented, clustered, and inward and outward hub and spoke structures. These are created as individuals choose whom to reply to or mention in their Twitter messages and the structures tell a story about the nature of the conversation. If a topic is political, it is common to see two separate, polarized crowds take shape. 6 Steps to Add Voice Comments to Google Docs Here is a step by step guide to show you how you can add " Voice Comments " within your Google Docs. This application is developed by 121 Writing. Here is how you can do it : 1- Head over to your Google Docs and click on " Create". scroll down to the bottom and click on "connect more apps " 2- Type in the word " voice " in the search panel then click on connect in front of " voice comments "

Social Media Resources If you're a trainer, educator, librarian or geek, statistics on social media are a must. Here are a few that I've found recently, together with sources. 1) Global Active Internet Users now totals 3.175 Billion, that’s nearly half of the world’s population (7.357 Billion). 2) As for Social Media, there are over 2.206 Billion active users, a global penetration of 30%. 3) There are 3.734 Billion Unique Mobile Users as of this quarter, accounting for a 51% worldwide penetration. 4) 1.925 Billion users utilise their mobiles for Social Media platforms. 24 Google Docs Templates that Will Make Your Life Easier Too much time can easily be wasted trying to format documents that have already been put together by someone else. If you use Google Docs, here are 24 time-saving templates that’ll let you get on with using the documents, rather than struggling with putting them together in the first place. The templates below have been split into four sections; work, health, home, and travel, so feel free to scroll to the section that’s most relevant to you. If you have any other Google Docs templates that you regularly use, please share these in the comments. Work Resumé