Top 10 Highly-Desired Skills You Can Teach Yourself 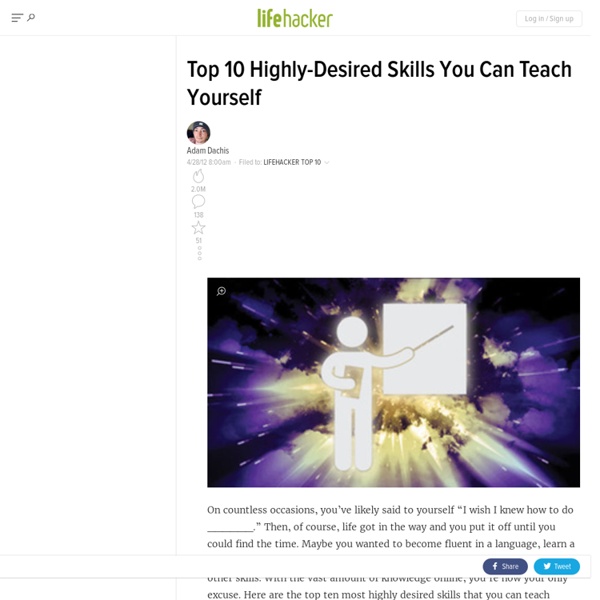 "Code is not as complicated as you think, so go get started!" I disagree. It really depends what you're learning. CSS and Objective-C/C++ are in completely different leagues (and categories, actually, but they both count as "code"). Getting started is the hardest part. Any languages after that just get easier and easier. For example, I started out programming around a year and a half ago, by inadvertently learning ActionScript 3 in Flash. I stuck to ActionScript for a long time until I was comfortable to move on. Once you adopt the programming mindset, learnt the convention, terminology, data types and the full syntax of a single programming language you're pretty much set. StackOverflow is the best place to get help (and only help - they won't make your programs for you) with programming, in my experience.

21 Harsh Truths No One Tells You About Life After College Why did NO ONE warn me that post graduation would debatably be the most difficult and confusing years of my young life? You’re too old for everything you’ve known but too young to be a real person yet. I really never expected 22 to be such a struggle; I guess I should have listened to Taylor Swift’s song more carefully instead of just blasting it at everyone’s birthday pre-games this year. This brings me to the top 21 harsh truths about postgraduate life. What We Learned Publishing Digging Into WordPress Digging into WordPress is an entirely self-published book. It's not that way because we just arbitrarily decided that self publishing was hip and that was what we were going to do. In fact, the plan early on was the opposite. Step one, we thought, was to write the book.

Online Language Instruction Join Learn Speak Together! The Most Complete Online Language Learning Course Available What will I get? 3 Ways To Productively Rest Your Brain Neuroscientific research is beginning to shed light on the idea that to be more productive and creative, we need to make break-taking a regular practice. In his recent bestselling book Imagine: How Creativity Works, Jonah Lehrer writes: “While it’s commonly assumed that the best way to solve a difficult problem is to relentlessly focus, this clenched state of mind comes with a hidden cost: it inhibits the sort of creative connections that lead to breakthroughs. We suppress the very type of brain activity that should be encouraged.” The challenge, though, is that we’re generally reticent to take those breaks, especially when it comes to our work and business. But many of us might not know an effective brain-rest technique aside from the obvious (take deep breaths, close your eyes) and the time-consuming (who has time to meditate for hours or take yoga three days a week?).

Win 1GB Of Free Dropbox Space On This Year’s Dropquest, Live On May 12 [Updates] If you use Dropbox, and love free extra space (and who doesn’t), get ready for the 2012 round of Dropquest! In case you missed it last year, Dropquest is a game in which you have to complete a series of riddles, tasks and puzzles, and if you manage to do so, you win a staggering 1GB addition to your Dropbox storage space for life. This year, Dropquest will launch on May 12, at 10AM PST (17:00 GMT), at which time the official Dropquest 2012 page will become available (if you click it now, you’ll get a 404). According to Dropbox, this year’s quest will be even harder than last year, but there are glorious prizes waiting for those who can complete it first. Aside from the 1GB of storage awarded to anyone who finishes the quest, Dropbox will also give away a Dropbox employee hoodie, a limited edition Dropbox Hack Week t-shirt, a Dropbox drawing signed by the entire Dropbox team, an invitation to help write the next Dropquest, 100GB/20GB/5GB/2GB extra storage for life, and other goodies.

You Can Easily Learn 100 TED Talks Lessons In 5 Minutes Which Most People Need 70 Hours For The other week I watched 70 hours of TED talks; short, 18-minute talks given by inspirational leaders in the fields of Technology,Entertainment, and Design (TED). I watched 296 talks in total, and I recently went through the list of what I watched, weeded out the crappy and boring talks, and created a list of the 100 best things I learned ! This article isn’t entirely about productivity, but I guarantee you’ll learn a thing or two. Here are 100 incredible things I learned watching 70 hours of TED talks last week! Productivity

Update Your Resume and Get a (Better) Job This Weekend You've probably heard too many times to count that "in this economy, you should be happy to have any job at all." Perhaps that's true, but that doesn't mean you can't try to find something better if you hate the job you've got. Here are a few things you can do this weekend to prepare to make a positive shift in your work life. P

Chinese Language Blog: Language and Culture of the Chinese-Speaking World Honoring the deceased for Qing Ming Jie. Today is a national holiday in China, the Clear Brightness Festival (清明节 – qīng míng jié). Taking place two weeks after the vernal equinox, this is one of the few Chinese holidays that follows the solar calendar. Although there are many English translations this holiday, such as the Clear Bright Festival and Ancestors Day, the name most commonly used is Tomb Sweeping Day, and for good reason. While this festival is about celebrating the arrival of spring and the start of the planting season, its most important aspect is honoring the deceased. Before we discuss the customs associated with Qing Ming, let’s take a look at the long history of this important Chinese festival. 9 Tactics for Rapid Learning (That Most People Have Never Heard Of) Whenever the subject of why some people learn faster comes up, I get a whole host of common answers: Some people are just naturally smart. (Often implying you can’t improve)Everyone is “smart” in their own way.

MobiText Is A Basic, Themeable Document Editor With Ribbon UI Windows comes with the WordPad utility that provides sufficient options for most basic word processing needs. However, if you seek an application that goes beyond what WordPad has up its sleves – providing more features and options then a third-party software is the way to go. Just recently, we came across Document.Editor (reviewed here), a feature-rich application that we found to be a great alternative to WordPad.

Removing Stains: The Basics - Martha Stewart Home & Garden There is no single technique or product that takes care of every spot and spill, but with the right information and supplies, many stains can be removed. If a garment isn't washable, the safest thing is to take it to a dry cleaner, although there are some treatments you can try at home (see Stain First Aid Chart). If you stain a washable garment, the golden rule is: Act quickly. For a liquid, gently blot up any excess with a white cloth, working from the outside in, so you don't spread the stain; do not press hard or rub.

Start Your Day in 33 Different Ways Mornings are underrated. I consider them fundamental for the whole diurnal experience. What you do in the very first moments of your morning will fundamentally and inexorably shape your entire day. Download torrents privately without a torrent client (or when torrent traffic is blocked) – with BitLet There are times when downloading torrents using a torrent client is simply not possible, such as when using a PC where you cannot or do not want to install a local torrent client, or if downloading from networks where torrent traffic is blocked (say by your ISP or network admin), just to name a few scenarios. Instead, it is possible to use a free Java online applet called BitLet, which lets you download torrents in your browser just as you would any normal file. It promises a high degree of privacy (see below), and runs on any browser that supports Java. First things first: Will this method bypass blocked torrent traffic? It should, but I have read reports on the net that sometimes it will and sometimes it won’t.

10 Things Extraordinary People Say Every Day They're small things... but each has the power to dramatically change someone's day. Including yours. Getty