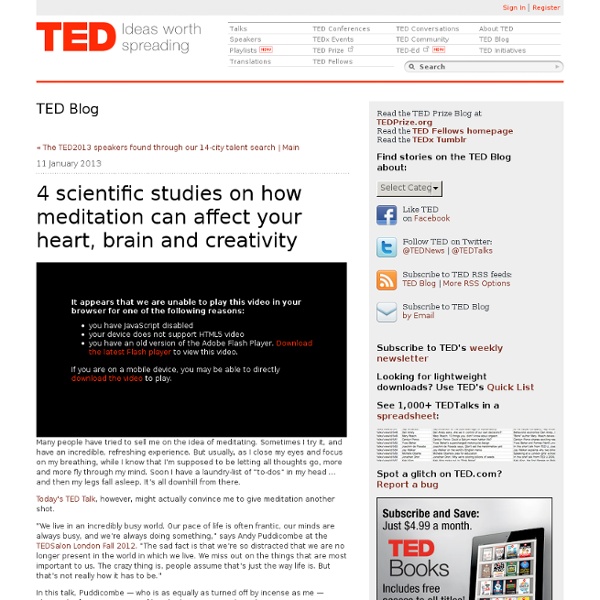 Many people have tried to sell me on the idea of meditating. Sometimes I try it, and have an incredible, refreshing experience. But usually, as I close my eyes and focus on my breathing, while I know that I’m supposed to be letting all thoughts go, more and more fly through my mind. Soon I have a laundry-list of “to-dos” in my head … and then my legs fall asleep. It’s all downhill from there. Today’s TED Talk, however, might actually convince me to give meditation another shot. “We live in an incredibly busy world. In this talk, Puddicombe — who is as equally as turned off by incense as me — shares the fascinating story of how he become a monk, and gives a convincing argument for why it is worth it to take 10 minutes a day to refresh the mind. “Most people assume that meditation is all about stopping thoughts, getting rid of emotions, somehow controlling the mind, but actually it’s much different than that,” says Puddicombe. Is meditating a good way to increase creativity?

Meditation Beats Anxiety By Activating Certain Brain Regions, Study Finds Mindfulness meditation -- nonjudgmental awareness of thoughts and emotions -- is known for its anxiety-busting powers, and now scientists are getting a better understanding of why it has this impact in the brain. Researchers from Wake Forest Baptist Medical Center found that meditation has effects on activity of particular brain regions, namely the anterior cingulate cortex -- which controls thinking and emotions -- and the ventromedial prefrontal cortex -- which controls worrying. Meditation seems to increase activity in the ventromedial prefrontal cortex, and decrease activity in the anterior cingulate cortex. "Mindfulness is premised on sustaining attention in the present moment and controlling the way we react to daily thoughts and feelings," study researcher Fadel Zeidan, Ph.D., a postdoctoral research fellow in neurobiology and anatomy at the medical center, said in a statement.

Banned TED Talk: Graham Hancock – The War on Consciousness Yet another TED talk banned by the TED community due to the challenge it poses to mainstream science. The talk was done at a TEDx conference and aired on the TEDx YouTube channel for a period of time before it was removed due to its content. After personally listening to this talk it is quite clear why it was censored. How to Meditate (The one who does not judge, by h. koppdelaney) There are many forms of introspection and mental training that go by the name of “meditation,” and I have studied several over the years. As I occasionally speak about the benefits of these practices, people often write to ask which I recommend. The science of willpower: Kelly McGonigal on sticking to resolutions It’s the second week in January and, at about this time, that resolution that seemed so reasonable a week ago — go to the gym every other day, read a book a week, only drink alcohol on weekends — is starting to seem very … hard. As you are teetering on the edge of abandoning it all together, Kelly McGonigal is here to help. This Stanford University psychologist — who shared last year how you can make stress your friend — wants you to know that you’re not having a hard time sticking to a resolution because you are a terrible person. Perhaps you’ve just formulated the wrong resolution.

How to Access the Mindfulness Within You. ~ Szymon Jarosławski How do we tap into mindfulness in our everyday lives? The modern life burdens us with the shackles of stability and predictability. We’ve been heading in this direction since the Industrial Revolution gave us the mass-produced clock. Or maybe it was the omnipresent clock that gave us the work efficiency which enabled the Revolution. 3 Things Mindfulness is Not. ~ Ruth Lera Via Ruth Leraon Apr 18, 2014 The experience of practicing mindfulness or meditation is one that is most often beyond words. There is an elusive quality to touching into the moment—and only this moment—that is hard to describe, perhaps impossible. However, in our North American perfectionist culture, which is obsessed with hating ourselves and constantly striving to be better, the word mindfulness has been usurped to mean many different things. 1.

7 traits kids need to succeed What if a child's success in school were measured not in IQ but in strength of character? That's the question Paul Tough tries to answer in his book How Children Succeed—Grit, Curiosity, and the Hidden Power of Character. Education is once again a hot-button issue this fall, as many provincial governments trim their education budgets and labour negotiations between teachers and administrators in Ontario remain acrimonious. Tough doesn’t discount the importance of a solid education, but he says character is as important as academics in helping children become successful adults. In this case, character is "not about morality," says Tough, a Canadian-born journalist.

Samyama Samyama (from Sanskrit संयम saṃ-yama—holding together, tying up, binding[1]). Combined simultaneous practice of Dhāraṇā (concentration), Dhyāna (meditation) & Samādhi (union). A tool to receive deeper knowledge of qualities of the object. It is a term summarizing the "catch-all" process of psychological absorption in the object of meditation.[2] Yoga Sutras[edit] Samyama is defined in the Yoga Sutras of Patanjali verses 3.1 through 3.6 as follows where the Sanskrit in Devanagari and IAST were sourced from Little[6] and the English from Iyengar (1993: pp. 178–183):[7] Trying Not to Try: How to Cultivate the Paradoxical Art of Spontaneity Through the Chinese Concept of Wu-Wei by Maria Popova “Our modern conception of human excellence is too often impoverished, cold, and bloodless. Success does not always come from thinking more rigorously or striving harder.” “The best way to get approval is not to need it,” Hugh MacLeod memorably counseled. We now know that perfectionism kills creativity and excessive goal-setting limits our success rather than begetting it — all different manifestations of the same deeper paradox of the human condition, at once disconcerting and comforting, which Edward Slingerland, professor of Asian Studies and Embodied Cognition at the University of British Columbia and a renowned scholar of Chinese thought, explores in Trying Not to Try: The Art and Science of Spontaneity (public library | IndieBound).

How To Rest Your Mind. ~ Rose Taylor Goldfield Indian teachers of yoga say that the Corpse Pose is the hardest yoga pose for Westerners. In Corpse Pose, we lie on the floor and surrender to the earth, leaving the body in perfect rest and stillness as though dead. But many of us have problems even with the pose of complete rest.

Required Reading 101 - School of Smock Why Kids Must Fail — And How They Can Succeed Resilience is a “hot” topic (see above, for one recent book). It has been for a while in education circles. Unlike many other “hot” topics, I think it’s a useful framework for understanding why some kids succeed and some kids don’t, and I’ve been using it a lot in my dissertation. I’m also trying to use the idea of resilience to help me as a better parent. Zen, Mindfulness, Transcendental Meditation and more Meditation shopping? Sounds like an oxymoron, right? Yet millions of Americans are seeking tools to turn within. As a nation we've tried to fix our problems with everything from psychotherapy and Prozac to positive thinking and politics. Now people everywhere are ready to close their eyes and take a dive -- not to escape, but to more fully be.