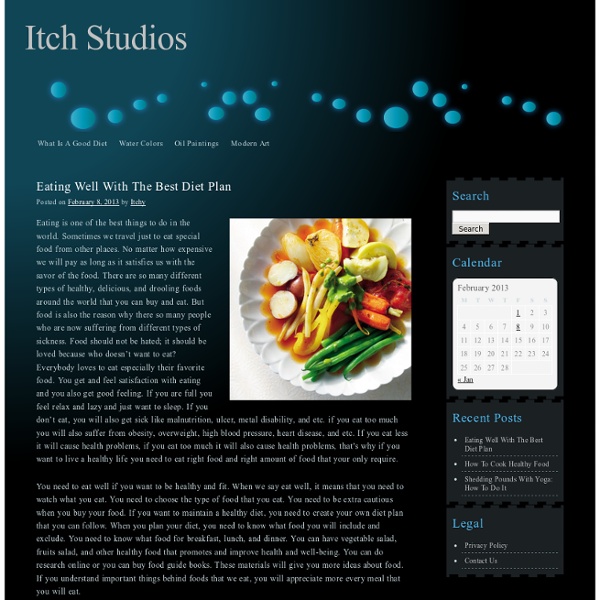 The Dimensions of Colour Figure 2.1. Glossy sphere (billiard ball) under a single direct light source, showing effects of specular and diffuse reflection. Photograph by David Briggs. Light is reflected from most surfaces by two simultaneous processes, known as specular (or surface) reflection and diffuse (or body) reflection. Specular (literally "mirror-like") reflection creates the highlight as its most conspicuous expression (Figure 2.1). On our ball, as on most substances apart from the coloured metals like copper and gold, the specular reflection retains the colour of the (white) light source. In specular reflection, light bounces according to the rule that the angle of incidence (measured against a line perpendicular to the surface) equals the angle of reflection. Figure 2.2. Many art instruction texts erroneously show the position of the highlight at the point directly facing the light source (Figure 2.3). Figure 2.3.

JohN Park tutorial-2 : walk cycle | angry animator So, you want to follow along some of my Flash lessons?Get 7 days of free unlimited access to lynda.com. Follow that link and get 1 week of access, see how you like it. Most sane people have a fear of animating walk cycles. A walk cycle can be described by four distinct poses: CONTACT, RECOIL, PASSING and HIGH-POINT. These four poses and a handful of inbetween drawings constitute a walk cycle. Here is the contact pose in front and side view. Look at the pose carefully. Some animators think that the recoil and high points are the most important poses because the head is at its highest and lowest positions. When the right foot is forward, the right arm is back, and vice versa. I have drawn in imaginary cylinders to illustrate the orientation of the shoulders and hips. Another name for this is “Torque”. The body is very rarely symmetrical: indeed, symmetry can be your enemy. Now look at the recoil pose, the second main pose in the cycle. This is the frame where the character impacts the ground.

Understanding Lights in Maya - Part 3 - Area and Volume Light Understanding Lights in Maya - Part 3by Aziz Khan, Afghanistan Hi Guys and welcome to part 3 of (Understanding Lights In Maya), in this tutorial we will understand the Area Light and Volume Light. In previous parts we already covered Ambient, Directional, Spot and Point Light. Please read the Part 1 here and Part 2 Here. Ok let's started by creating a Area light in the scene. 1 - Select the Light, open Attributes editor, now activated Ray Trace Shadows 2 - Hit render and you should have something like in the image below, as you can see the shadows are too grainy and we will fix this issue next by increasing (Shadow Ray) and the (Ray Depth Limit)3 - Now in the light attributes increase (Shadow Ray) and the (Ray Depth Limit) according to your need, and then open (Render Settings) by going to (Window>>Rendering Editors>>Render Settings), Expand Raytracing tab and crank up the values as you see in the image Now you should see couple of different option like (Use Light Shape) and (Emit Photons)

Art Tutorials at Epilogue What is the difference between polmer clay and sculpey 111 clay? - Yahoo!7 Answers . Sculpey III is just one brand (and line) of "polymer clay." It's often the cheapest of the small pre-colored brands polymer clay (at least when Michaels *isn't* having one of their sales --which is right now!). Polymer clays must be heat "cured" at a certain temperature for a certain length of time or they won't harden (they don't harden in the air by "drying" like "air-dry" clays do). "Modeling" clays (the older type primarly used by kids) also won't harden in the air, but if baked it will actually melt. When most people say "Sculpey," thery usually mean Sculpey III which comes in 2 oz bars, but other "Sculpeys" are the original Sculpey (white or terracotta color only, generally comes in 2 lb boxes), SuperSculpey (translucent flesh colored clay, in 1 lb box), or one of the other specialized Sculpeys, like Ultralight or Eraser Clay, etc. All of the regular Sculpeys are weak clays though after baking in any thin or projecting areas, so be aware of that if you need the clay to be thin.

Sparth > Concept design & visual development Muscle Tutorial thinger This came about after talking to a friend who said he wanted to improve at art but didn't know how to break out of his rut and try something different. I started drawing this as a "this is the easiest way to draw a relatively satisfactory cartoon head" thing and it just ballooned out from there. It doesn't cover proportions and stuff like that because there are a billion billion tutorials and anatomy books that can tell you "a person is so many heads tall, a head is so many eyes wide, ect". This has been up in my DA gallery for a while, but people have been asking for a printer-friendly version so I'm uploading the individual pages here.

Planet Tutorial by `dinyctis on deviantART How to Start as an Illustrator June 8th, 2010 How to Start as an Illustrator (originally published in 2005) So many people have written me asking for advice I decided to put this short list together. Some of these things may be stating the obvious but I wanted to start simply so that you don’t get too overwhelmed with an enormous load of things to do. Be gentle with yourself. 1. 2. 3. -read designer Bruce Mau’s Incomplete Manifesto I particularly like, “Don’t enter competitions, Just don’t do it, it’s not good for you.”