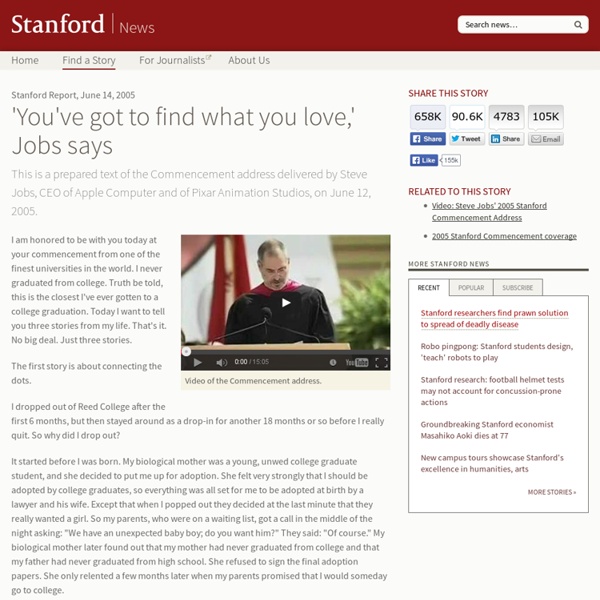 Stanford Report, June 14, 2005 This is a prepared text of the Commencement address delivered by Steve Jobs, CEO of Apple Computer and of Pixar Animation Studios, on June 12, 2005. Video of the Commencement address. I am honored to be with you today at your commencement from one of the finest universities in the world. The first story is about connecting the dots. I dropped out of Reed College after the first 6 months, but then stayed around as a drop-in for another 18 months or so before I really quit. It started before I was born. And 17 years later I did go to college. It wasn't all romantic. Reed College at that time offered perhaps the best calligraphy instruction in the country. None of this had even a hope of any practical application in my life. Again, you can't connect the dots looking forward; you can only connect them looking backward. My second story is about love and loss. I was lucky — I found what I loved to do early in life. I really didn't know what to do for a few months.

What Steve Jobs taught us about failure College dropout. Fired tech executive. Unsuccessful businessman. Steve Jobs will always be best known for his incredible success in guiding Apple Inc. and transforming the entire consumer computer and phone industry. But he’ll also be remembered fondly as the poster child for how making mistakes — and even failing — can sometimes end up being the best thing that ever happens to you. Jobs passed away Wednesday after suffering for years from health problems, likely stemming from a battle with cancer. His death came after he was forced to step down from his position as chief executive of Apple because of the ongoing health problems. By the time he turned the reins of the company over to his second in command, Tim Cook, Jobs had become one of the business world’s greatest comeback kids. The company he founded, was fired from, and then returned to has gone from also-ran to technology industry leader. Apple also is now one of the most valuable companies in America by market capitalization.

Ashram Etymology[edit] The word ashram also spelled ashrama comes from the Sanskrit root srama which means giving the meaning of making an effort, towards liberation (moksha), which is the central aim of life in Hinduism. [4] Overview[edit] An ashram would traditionally, but not necessarily in contemporary times, be located far from human habitation, in forests or mountainous regions, amidst refreshing natural surroundings conducive to spiritual instruction and meditation. The residents of an ashram regularly performed spiritual and physical exercises, such as the various forms of Yoga. Other sacrifices and penances, such as Yajnas were also performed. Ashrams have been a powerful symbol throughout Hindu history and theology. History[edit] In recent history, one of earliest extant ashram, Kailash Ashram was established by Dhanraj Giri in 1880 at Rishikesh, this was followed by Sivananda Ashram of Swami Sivananda established in 1936. Schools in Maharashtra[edit] Christian ashrams[edit]

Mark Twain Gives Nine Tips for Living an Extraordinary Life by Henrik Edberg Is truth stranger than fiction? Perhaps. In this great article written by Henrik Edberg, we find that Mark Twain had expressed in his writings over the years an entire philosophy for living. “Let us live so that when we come to die even the undertaker will be sorry.” “When your friends begin to flatter you on how young you look, it’s a sure sign you’re getting old.” You may know Mark Twain for some of his very popular books like Adventures of Huckleberry Finn and The Adventures of Tom Sawyer. Twain is known for his many – and often funny – quotes. 1. “A man cannot be comfortable without his own approval.” If you don’t approve of yourself, of your behaviour and actions then you’ll probably walk around most of the day with a sort of uncomfortable feeling. This can, in a related way, be a big obstacle in personal growth. What you may be bumping into there are success barriers. Or if you make some headway in the direction you want to go you may start to sabotage for yourself.

What Does Your Body Language Say About You? How To Read Signs and Recognize Gestures - Jinxi Boo - Jinxi Boo Art by LaetitziaAs we all know, communication is essential in society. Advancements in technology have transformed the way that we correspond with others in the modern world. Because of the constant buzz in our technological world, it's easy to forget how important communicating face-to-face is. When conversing old-school style, it's not only speech we verbalize that matters, but what our nonverbal gestures articulate as well. Body language is truly a language of its own. 10% from what the person actually says40% from the tone and speed of voice50% is from their body language. Lowering one's head can signal a lack of confidence. Pushing back one's shoulders can demonstrate power and courageOpen arms means one is comfortable with being approached and willing to talk/communicate

The Tech World Reacts to Jobs Death Executives and politicians comment on the death of Steve Jobs, the co-founder and former chief executive officer of Apple Inc. (AAPL): Bill Gates, chairman and founder of Microsoft Corp. “I’m truly saddened to learn of Steve Jobs’s death. “Steve and I first met nearly 30 years ago, and have been colleagues, competitors and friends over the course of more than half our lives. “The world rarely sees someone who has had the profound impact Steve has had, the effects of which will be felt for many generations to come. “For those of us lucky enough to get to work with him, it’s been an insanely great honor. U.S. “Steve was among the greatest of American innovators -- brave enough to think differently, bold enough to believe he could change the world, and talented enough to do it. “By building one of the planet’s most successful companies from his garage, he exemplified the spirit of American ingenuity. “The world has lost a visionary. Steve Wozniak, co-founder of Apple. “I am really sad.

Welcome to the 419 Eater TITLE: Busted! SCAMMER NAME: Ony Obo SCAMMER LOCATION: Lagos, Nigeria SCAMBAITER: Shiver Metimbers For a slight change, we have a scammer trying to ply his trade via a different routine. This time it's a repentant dying man, wanting to distribute his millions to charity. We've had carvings and artwork from scammers on quite a few occasions now, and I think it's time to move on to other ways to cause misery for these thieves, so for my final attempt at getting artwork out of a scammer I'll try for something a little different. It all starts way back near the end of July 2006... From: Ony Obo To: Brian Anthony Date: July 23rd 2006 Subject: HELP ME TO SPREAD GOODNESS Hello my friend, Hope this day finds you well? I have not particularly lived my life so well, as I never really cared for anyone (not even myself) but my business. Now that God is about to call me, I have willed and given most of my property and assets to my immediate and extended family members as well as a few close friends. OK.

ENFP Profile Extraverted iNtuitive Feeling Perceiving by Marina Margaret Heiss Profile: ENFP Revision: 4.0 Date of Revision: 28 Feb 2011 [The following comes partially from the archetype, but mostly from my own dealings with ENFPs.] ENFPs are both "idea"-people and "people"-people, who see everyone and everything as part of a cosmic whole. They want to both help and to be liked and admired by other people, on both an individual and a humanitarian level. This is rarely a problem for the ENFP, as they are outgoing and warm, and genuinely like people. ENFPs often have strong, if sometimes surprising, values and viewpoints. ENFPs can be the warmest, kindest, and most sympathetic of mates; affectionate, demonstrative, and spontaneous. For some ENFPs, relationships can be seriously tested by their short attention spans and emotional needs. In the workplace, ENFPs are pleasant and friendly, and interact in a positive and creative manner with both their co-workers and the public. by Joe Butt Famous ENFPs: Dr.

8 Ways to be UBER Charismatic What did JFK, Marilyn Monroe and Hitler all have in common? They were all renowned charismatics that lit up every room they entered. You’ve most likely met one of these kinds before. Robert Greene studied these people and detailed the methods one can use to become a charismatic in his book “The Art of Seduction.” Purpose Pick a cause, a goal, a vision and live it. Mystery Become mysterious (like Bruce Wayne) by being unpredictable. Saintliness Think Gandhi. Eloquence Speak slowly and hypnotically, with random pauses if needed. Theatricality Be larger than life. Danger/Spontaneity Radiate dangerous, rebellious sexuality. Vulnerability Have a soft side and love your followers. Magnetism Develop a piercing gaze. DO NOT COMMENT.

Steve Jobs: His Legacy of Deals Bloomberg News Apple said Wednesday that Steve Jobs, the technology pioneer who revived the company’s fortunes, died at the age of 56. Be sure to read The Wall Street Journal obituary for Jobs. Jobs famously transformed Apple through the creation of new technologies and gadgets that people embraced, and that altered the worlds of computing hardware, software, music, movies and marketing. Here at Deal Journal, we also are celebrating Jobs’s legacy of building Apple and other companies through corporate deal making. Deal Journal has chosen to mark the moment with a look back at Jobs’s five most important deals. We admit, it’s a rather selective batch of picks. 5) Siri, 2010, reportedly more than $200 million Last year, Apple bought Siri, the company behind a mobile application that functions as a personal assistant. 4) Lala, 2009, Reportedly $85 million Apple in late 2009 agreed to buy Lala, which allowed users to stream music from its collection of Web-based songs. Associated Press 3) P.A.

Gloss: a Pygame OpenGL wrapper Gloss is a high-performance graphics wrapper around Pygame that lets you take advantage of OpenGL without having to delve into the murky depths of 3D programming. Gloss lets you build 2D games where you can rotate, scale and recolor sprites on the fly, and also includes a selection of helpful mathematics functions to make the life of games coders easier. Gloss is licensed under LGPLv3, and comes with full documentation, a tutorial and several code examples to help get you started, so if you're looking to make a game quickly and easily give it a try! OpenGL is much harder than Pygame. Why should I use this? Gloss uses OpenGL, but hides it all. What does Gloss include? The functionality most people will want to use in Gloss includes: Download the tarball and run some of the examples to see what Gloss can do. Doesn't Pyglet do all this already? Pyglet is a very cool and very mature OpenGL library for Python, but it serves quite a different purpose to Gloss. Is Gloss hard to learn?

21 Habits of Happy People “Happiness is a habit – cultivate it.” ~ Elbert Hubbard Happiness is one aspiration all people share. No one wants to be sad and depressed. We’ve all seen people who are always happy – even amidst agonizing life trials. 1. Be thankful that you woke up alive each morning. 2. Surround yourself with happy, positive people who share your values and goals. Accept others for who they are as well as where they are in life. 4. Keep up to date with the latest news regarding your career and hobbies. 5. Don’t wallow in self-pity. 6. Some statistics show that 80% of people dislike their jobs! 7. Take the time to see the beauty around you. 8. Don’t take yourself – or life to seriously. 9. Holding a grudge will hurt no one but you. 10. Develop an attitude of gratitude. 11. Always make sure your loved ones know you love them even in times of conflict. 12. Honesty is the best policy. 13. Meditation gives your very active brain a rest. 14. Concentrate on creating your life the way you want it. 15. 16.