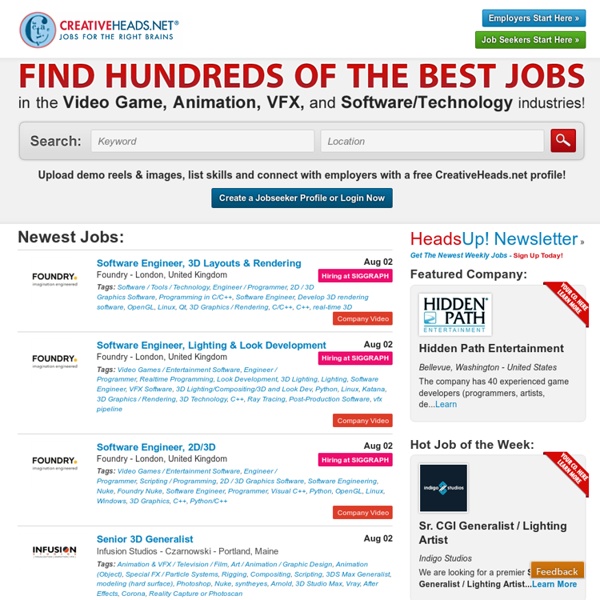 "I Moved to LA to Work in Animation" new 70-page comic I moved to LA in 2015 to storyboard for animation studios. I get a lot of questions from artists who are interested in making similar career moves themselves. I wanted to make a comic about my experience, half for me and half for anyone looking for information about LA / storyboarding for animation. It took a LOT of my weekends over the past year, but the final, 70-page comic is now ready to share with you!!

10 good reasons for turning down work When you're starting out as a freelancer and haven't quite found your feet, it's tempting to say yes to any work that comes your way. You'll soon discover, though, that it pays to discriminate a little. 25 tips for staying sane as a freelancer The Animation Bursary - .Film and Video Workshop..Film and Video Workshop. The Animation Bursary The scheme is now closed as we raise money to run it again. We look for talented animators who have a film idea and are ready to go, we offer: Art, Animation & Film Analysis by James Chiang The first 3 shots of this 16 scene sequence where Baloo and Mowgli meet for the first time in Walt Disney’s 1967 classic, The Jungle Book. Let’s begin our 5 Part analysis of Frank Thomas’ and Ollie Johnston’s marvelous work in this portion of The Jungle Book: Scene 1: A Lesson in broken rhythm and natural action. I love the unplanned feeling of this shot even though it’s clearly well-designed in terms of layout, camera move and action choreography.

2D Animation Jobs in Canada An exciting opportunity to work with a small, creative firm on Robert Kirkman's series INVINCIBLE!! The Studio Pipeline TD manages, supports and enhances the infrastructure that facilitates the studio’s technical processes and workflow for all projects. QUALIFICATIONS Education/Experience: 6+ years of experience working in a studio production environment.

Mikros image Animation Position overview Who’s ready? Mikros Animation Montréal is now in production on the new SpongeBob SquarePants movie. We’re looking for animators to help up bring Bikini Bottom to life! What makes British animation British? Explore the BFI’s Animated Britain collection on BFI Player (BFI National Archive). In 2018 the BFI is offering a look back through eleven decades of history since the first documented uses of stop-motion animation in the UK. And now, in partnership with BBC Four, we are funding up to 12 new animated shorts to look forwards to a new generation of emerging talent. But putting aside some basic geography, can we identify any defining characteristics of animation produced in Britain? Since the 1920s, animators in Britain have struggled to compete with the output of American studios.

Animation 2018 Following on from the success of Listen to Britain 2017 which offered a unique platform to emerging documentary makers, BBC Four in partnership with BFI are now searching for a suite of short films to showcase the creativity and diversity of the next generation of animation talent working in the UK today. We will be giving up to 12 individuals or teams the opportunity to have their film selected by a panel of representatives from BBC, BFI and the world of British animation. If successful, you will be awarded a grant of between £2,000 and £10,000 towards the creation or completion of your original film, the opportunity to have your film screened at BFI Southbank and the chance for it to be broadcast on BBC Four in late 2018.