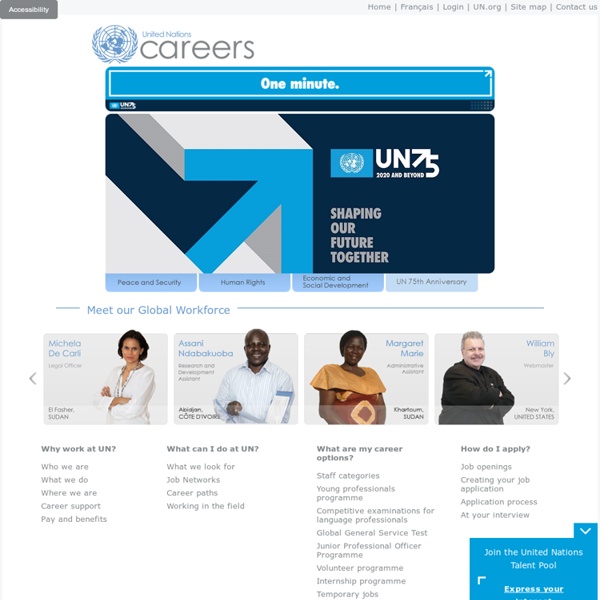 Jobs - JRC Science Hub The JRC offers an enriching multi-cultural and multi-lingual work environment with lifelong learning and professional development opportunities. Opportunities exist in both the research and administrative fields offering the chance to work at the cutting edge of scientific and technological developments in support of EU policy. While the JRC’s recruitment efforts focus predominantly on researchers linked to the main activities of the organisation, opportunities do exist for others in occupational fields such as secretarial, financial, legal, HR, communication, information technology, safety, site service and maintenance functions.

United Nations Framework Convention on Climate Change - Employment Fixed-term employment Short-term employment Consultancy Internship European Affairs Recruitment Specialists (EARS), BrusselsHOME - European Affairs Recruitment Specialists (EARS), Brussels 4,000 EU-Related OrganisationsHave an Office in Brussels Historically, some characteristics of the EU affairs marketplace have made it a difficult arena for recruiters to access. This could be due to the perceived preference of employers to recruit via the ‘word of mouth’ approach, not surprising in the village-size EU bubble.

MA in Cultural Policy, Relations & Diplomacy, Goldsmiths, University of London The discourses of contemporary “Leadership” and “Enterprise Theory” are, much like the wider discourse of Management Theory itself, in a state of critical transformation. The authority, validity, and appropriateness of that type of scientifically influenced or “positivist” thinking that informed so much of the early “Taylorist” and “Fordist” influenced work of the so-called “first age” (Snowden, 2005) of Management Theory has been thrown into disrepute, as have many of the premises of that more contextually aware and “constructively” influenced work that informed the so-called “second age.” Particular emphasis will also be placed on the “cross-cultural” significance of this work in relationship to both Gert Hoftstede (2001) and Richard E. Nisbett’s (2005) work on the differing “dimensions” of cultural belief, value, and understanding.

National Urban Transport Policy: Enabling More Sustainable Development in a Changing World National transport policy and financing can have many effects on urban transport and sustainability. How can these best advance sustainable development goals? How could global support for national sustainable transport policies and financing facilities enhance achievement of sustainable development goals? Short Course - Culture, Society and the Making of Humanity: Introducing Anthropology, Goldsmiths, University of London Why do we identify with some social groups more than others? How do every day activities such as shopping inform our sense of group belonging? Human behaviour, culture and society pose many questions for all of us and through the discipline of anthropology - the study of humans - we can reveal important insights into language, race, marriage, religion, sex and other defining features of our humanity. As a discipline, anthropology is concerned with understanding what constitutes ‘human nature’ and the underpinnings of human behaviour. This course also examines some of the ways anthropologists have tried to understand what it means to be ‘human’.

Events Management Courses – Major Events Management Short Course London This course is designed to equip students with the skills to organise all aspects of indoor and outdoor music events, press conferences, charity or major sponsored events. It covers project management, strategic planning, budgeting, finance, promotions, marketing and sponsorship, operations and production, health and safety, and risk management. Case studies are used to aid learning. Women at the wheel, the danger is real? Para leer en español, haz click aquí By Luz Caballero* The sentence has rhythm, but it is not true. Road accidents are the leading cause of deaths not related to health in the world. 1.24 million of people die annually in traffic accidents. Around 46% of them are known as vulnerable road users: pedestrians, cyclist and motorcyclists. Most (56%) are between 15-44 years old, and the majority (77%) are men.

Scholarships and financial support The quality of British education is universally acknowledged: British universities and colleges frequently come out top of the list in global ratings of educational institutions. Tuition fees in Britain are rather high; however, many universities and colleges have established their own scholarship programs for international students. The student can be granted either a flat sum (which is determined independently by every educational institution, according to the student’s chosen program) or a scholarship which covers from 50% to 100% of tuition fees. The number of recipients may be restricted, though some scholarships are available to all candidates who meet the requirements of the institution. Some scholarships are only available for certain educational programs during a fixed period of time. There are also subject scholarships, for example, for outstanding performance in sports.

Chief Executive Officer Chief Executive OfficerTransLinkVancouver, British Columbia, Canada Delivering a world class transportation system, TransLink is committed to excellence as Metro Vancouver’s transportation authority.Of the world’s major cities, only Vancouver, London and Paris have managed to integrate public transit and road planning under one central authority with its own stream of revenue. With a combined workforce of over 6,700 employees and $8.1 billion in assets ($2.4 billion that TransLink manages and are leased from the Province of BC), the new CEO of TransLink will lead a complex organization responsible for the planning, funding, building and operation of an integrated transportation system for the movement of people and goods in Metro Vancouver. To the 2.3 million people who live in Metro Vancouver, TransLink is an essential contributor to their quality of life, work and play.

Scholarships from other sources - UWE Bristol: Fees and funding Organisations independent of UWE that provide scholarship opportunities to international students. British Chevening Scholarship The Chevening Scholarships are the UK government’s global scholarship programme, funded by the Foreign and Commonwealth Office (FCO) and partner organisations. 2013 was the 30th anniversary of the Chevening programme, which was established in 1983, and has developed into a prestigious international scheme. Scholars come from 118 countries worldwide, and over 600 scholarships will be awarded this year. There are over 42,000 Chevening alumni around the world who together comprise an influential and highly regarded global network. Scholars are personally selected by British Embassies and High Commissions throughout the world, sometimes in partnership with sponsoring organisations.

​Using open tools to create the digital map of Cairo’s public transit Follow the authors, Tatiana (@tatipq) and Diego (@canaless) on Twitter The first step in any transit planning process involves understanding the current supply and demand of transit services. In most of the countries where we work, understanding the supply of services is a messy, costly and lengthy process, since most cities have little knowledge of bus routes, services and operational schemes. Internships MoMA Departments Below are brief descriptions of the departments at MoMA that may offer internships. We do our best to match an intern’s experience and skill with departmental needs.