Cartography of the Anthropocene - Globaïa 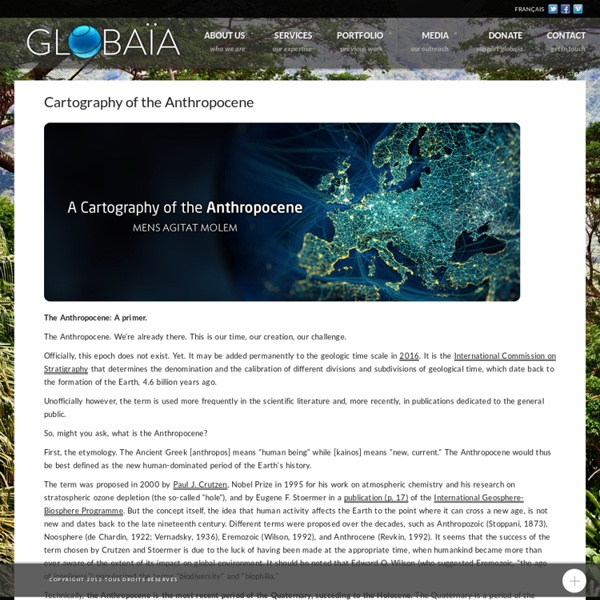 The Anthropocene: A primer. The Anthropocene. We’re already there. This is our time, our creation, our challenge. Officially, this epoch does not exist. Yet. Unofficially however, the term is used more frequently in the scientific literature and, more recently, in publications dedicated to the general public. So, might you ask, what is the Anthropocene? First, the etymology. The term was proposed in 2000 by Paul J. Technically, the Anthropocene is the most recent period of the Quaternary, succeding to the Holocene. The Pleistocene (2.588 Ma to 11.7 Ka) was a tumultuous era, during which more than eleven major glaciations occurred. The Holocene (11.7 ka until about 1800 AD) was a time comparatively smoother in terms of climate variability. We are officially still in the Holocene. We collectively rolled over into a new era, which includes its stakes and challenges but also its opportunities and great qualities. Mapping the Anthropocene: first few steps. Comments?

The Geotagger's World Atlas Every city has something unique about it, whether it’s a memorial statue, a cool coffee shop, a world-renowned museum or a local pizza parlor. These places are visited by hundreds or maybe even thousands of people a year, which translates to dozens of photos, many of which are geotagged to show the location of these popular and special places. So, what would happen if you took all of those photos and created a map, linking the photos to show individual journeys and locations?

Subcomission on Quaternary Stratigraphy, ICS » Working Groups You are in: Home » Working Groups What is the 'Anthropocene'? - current definition and status The 'Anthropocene' is a term widely used since its coining by Paul Crutzen and Eugene Stoermer in 2000 to denote the present time interval, in which many geologically significant conditions and processes are profoundly altered by human activities. Working group convenor: Dr Jan Zalasiewicz (Leicester) e-mail: jaz1@le.ac.uk Mapline Blog How to Make an Awesome Data Visualization with Pin Map What is a Pin Map? 1 location = 1 pin Got the idea? Therefore, a pin map contains pins that each represent a geographical location. Be it a complete address, a county, a region, a state, or a zip code, Mapline can help you plot a pin map. Columns on your Excel spreadsheet data is plotted on your map data, allowing you to search for geographic information faster.

Antonio Stoppani's Anthropozoic Edited by Etienne Turpin + Valeria Federighi Images Lisa Hirmer Lisa Hirmer, Untitled, from Sudbury Slag, 2012 Introduction The Agas Map Our new (as of the beginning of 2015) implementation of the Agas Map is based on the OpenLayers 3.0 library. It presents the map as a zoomable, rotatable tiled image with several hundred locations plotted on it. In the default view, the locations are initially hidden; you can show them by checking checkboxes in the navigation panel which appears at the top right of the map.

How Did Humans First Alter Global Climate? The scientific consensus that human actions first began to have a warming effect on the earth's climate within the past century has become part of the public perception as well. With the advent of coal-burning factories and power plants, industrial societies began releasing carbon dioxide (CO2) and other greenhouse gases into the air. Later, motor vehicles added to such emissions. In this scenario, those of us who have lived during the industrial era are responsible not only for the gas buildup in the atmosphere but also for at least part of the accompanying global warming trend. Now, though, it seems our ancient agrarian ancestors may have begun adding these gases to the atmosphere many millennia ago, thereby altering the earth's climate long before anyone thought. New evidence suggests that concentrations of CO2 started rising about 8,000 years ago, even though natural trends indicate they should have been dropping.

Enter the Anthropocene Elizabeth Kolbert from Geologic City: A Field Guide to the GeoArchitecture of New York, smudge studio 2011 The path leads up a hill, across a fast-moving stream, back across the stream, and then past the carcass of a dead sheep. In my view it’s raining, but here in the Southern Uplands of Scotland, I am told, this counts only as a light drizzle, or smirr. Just beyond the final switchback, there’s a waterfall, half shrouded in mist, and an outcropping of jagged rock. The rock has bands that run vertically, like a layer cake that’s been tipped on its side.