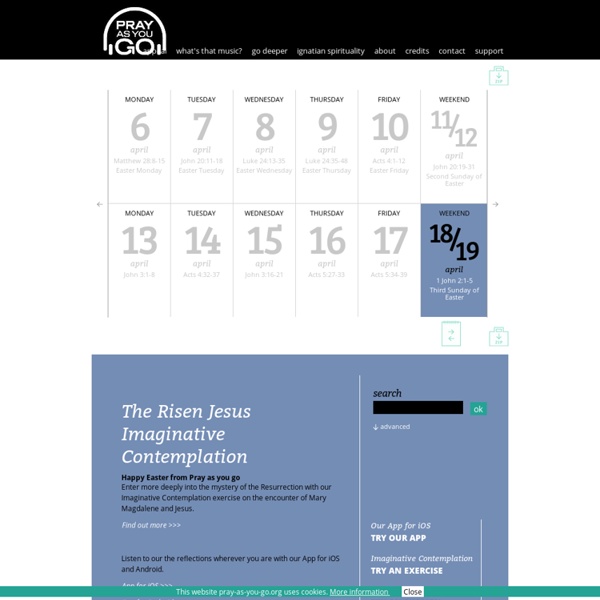 Ancient_wisdom.html Come, put your mundane concerns aside for awhile and cross the threshold to explore the Wisdom of the Ages. Click on above banner for catalog and order information This site is an ongoing project which will be updated regularly-- new material will be added on a continuing basis. Something to think and pray about this week Our Move Towards Resurrection We are all standing in front of a life-size image of Christ on the cross. For most of my life, the stations in churches I’ve visited have been small paintings or wall carvings placed at intervals, but at Xavier they’re much larger panels, and I find myself connecting with the scenes in a new way. In the spirit of St. Ignatius, I imagine all of us as extensions of the image before us, truly present at the foot of the cross, standing beside those depicted in the scene, wondering what it means and what is in store. At the fourteenth station, the image of Jesus being placed in the tomb, my eyes are drawn up, to a separate image high above the stations.

Prayers for all occasions, Treasury of Prayers Prayers for all Occasions, Needs, and Intentions For me, prayer is a surge of the heart; it is a simple look turned toward heaven, it is a cry of recognition and of love, embracing both trial and joy. "Prayer is the raising of one's mind and heart to God or (St.

The Ancient Chinese Libertarian Tradition - Murray N. Rothbard The first libertarian intellectual was Lao-tzu, the founder of Taoism. Little is known about his life, but apparently he was a personal acquaintance of Confucius in the late sixth century BC and like the latter came from the state of Sung and was descended from the lower aristocracy of the Yin dynasty. Unlike the notable apologist for the rule of philosopher-bureaucrats, however, Lao-tzu developed a radical libertarian creed. For Lao-tzu the individual and his happiness was the key unit and goal of society. If social institutions hampered the individual's flowering and his happiness, then those institutions should be reduced or abolished altogether. To the individualist Lao-tzu, government, with its "laws and regulations more numerous than the hairs of an ox," was a vicious oppressor of the individual, and "more to be feared than fierce tigers."

The Divine Mercy Message from the Marians of the Immaculate Conception The message of The Divine Mercy is simple. It is that God loves us — all of us. And, he wants us to recognize that His mercy is greater than our sins, so that we will call upon Him with trust, receive His mercy, and let it flow through us to others. Thus, all will come to share His joy. The Divine Mercy message is one we can call to mind simply by remembering ABC: Holy Souls Crusade - Who or what are the Holy Souls? Who or what are the Holy Souls? Perhaps we need to define what is the soul first. The soul is the primary principle of life. In plants it is a vegetative life principle and in animals a sensitive life principle. But the far superior human soul is rational, spiritual, and immortal. Soul and body in man are so united in a single nature and person that the soul is said to be the substantial form of the body; it is the life principle which makes the body what it is essentially: a human body.

Syncretism Syncretism /ˈsɪŋkrətɪzəm/ is the combining of different, often seemingly contradictory beliefs, while melding practices of various schools of thought. Syncretism involves the merger and analogizing of several originally discrete traditions, especially in the theology and mythology of religion, thus asserting an underlying unity and allowing for an inclusive approach to other faiths. Syncretism also occurs commonly in expressions of arts and culture (known as eclecticism) as well as politics (syncretic politics). Nomenclature, orthography, and etymology[edit] The Oxford English Dictionary first attests the word syncretism in English in 1618. The Seven Dolors of Mary - The Holy Souls in Purgatory "Settle with your opponent quickly while on the way to court with him. Otherwise your opponent will hand you over to the judge, and the judge will hand you over to the guard, and you will be thrown into prison. Amen, I say to you, you will not be released until you have paid the last penny." Matthew 5:25 & Luke 12:57-59 "If anyone builds on this foundation with gold, silver, precious stones, wood, hay or straw, the work of each will come to light, for the Day will disclose it. It will be revealed with fire, and the fire [itself] will test the quality of each one's work.

Internet Resources for the Study of Judaism and Christianity This page lists a number of sites on the Internet that are useful for the study of Judaism and Christianity. The list is necessarily partial, provisional, and even parochial. A casual glance will show how Penn-centered it is. It is amazing that this much relevant information already exists on the Internet. Some of this material is brilliant, and much of it is useful. One should realize, however, that most original research must still begin in a good library. Treasury : Prayers : Prayers for Holy Souls De Profundis I place my trust in the Lord, I am certain of His word. Out of the depths I cry to you, O Lord. Lord hear my voice! O let your ears be attentive to the voice of my pleading. If you, O Lord, should mark our guilt, Lord, who would survive?

Chapter One: Your Mind is Your Religion by Lama Thubten Yeshe When I talk about mind, I’m not just talking about my mind, my trip. I’m talking about the mind of each and every universal living being. The way we live, the way we think—everything is dedicated to material pleasure. We consider sense objects to be of utmost importance and materialistically devote ourselves to whatever makes us happy, famous or popular. What is Pentecost? Why Does It Matter? What is the Meaning and Spiritual Significance of Pentecost? How can Pentecost make a difference in your relationship with God?