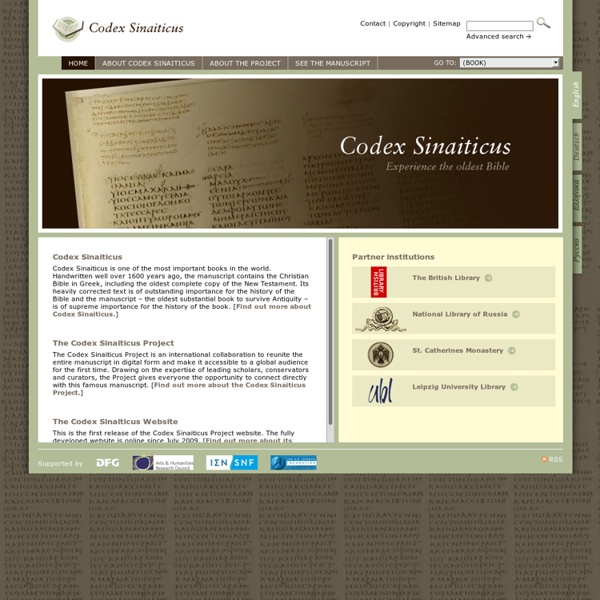 Bart Ehrman Answered Bart Ehrman is perhaps the most influential skeptical New Testament scholar in North America. Several of Ehrman's books have become standard textbooks in many universities. His skepticism is not well-founded, however. This interview features New Testament scholar Mike Licona who answers a number of Ehrman's major contentions. Stream and download options. 7 Reasons to Memorize Scripture There are few spiritual disciplines more rewarding than memorizing Bible passages. Here are a few: For fellowship with God

Christ and the Human Condition Introduction Early in the book of Job, Eliphaz the Temanite declares that “man is born for trouble, as sparks fly upward” (5:7). Whether it’s the trouble that befalls us as we’re simply minding our own business or the trouble we bring upon others (or even ourselves), difficulties, sin, and suffering seem to plague us wherever we turn. Just think for a moment about some of the natural evils which afflict the human race.

Spurgeon on Revival Sermon I. Infallible Signs Of Revival A Sermon Delivered on Lord's Day Evening November 12, 1876 At the METROPOLITAN TABERNACLE, NEWINGTON "The Lord alone shall be exalted in that day. Isaiah 2:11 In the eternal past the Lord alone was exalted.

Ancestral Altars & Rituals : Sarah Anne Lawless brief introduction to modern ancestor worship for animists, spirit workers, pagans and witches. Whether you wish to work with familial ancestors (the beloved dead) or the ancestors of witchcraft (the mighty dead), this article contains simple practices and rituals to incorporate into your spiritual path. You will learn how to set up shrines and altars for the beloved and mighty dead, how to create a spirit fetiche to connect the dead to the land of the living, how to give formal and informal offerings, as well as simple rituals of benevolent necromancy. Keep in mind the dead are with us the entire dark half of the year from Samhuinn until Imbolc. Honour them often and perhaps leave your ancestral altar up until the gate is closed once more between the living and the dead. A blessed All Hallow’s Eve to you and yours.

Planetary Conjurations Easily one of the longest passages in the Munich Manual, the following is a translation of a series of astrological and planetary rituals used to time and carry out particular astrological and astral rituals. Although out of place in a grimoire primarily concerned with nigromancy and necromancy, the section on astral magic and planetary conjurations is one of the more interesting to a modern magus or practitioner of the Work. The following text is translated from Richard Kieckhefer’s “Forbidden Rites: A Necromancer’s Guide of the 15th Century”, and is taken from folios 68v through 96v. The text is almost exactly the same to the conjurations, lists, and spirits as declared in the Heptameron of Pietro d’Abano, itself based on the Sepher Razielis, and is quite likely to have been derived from it, though with a few changes here and there, possibly due to corruption.

The Six Stages of Mental Strength Many people think that mentally strong people are simply born that way. That from the moment their feet hit the ground, they are simply endowed with some almost supernatural skill that allows them to face challenges bravely. Others think that mental strength is like a light bulb – it is either turned on or turned off. And if yours happens to be off, you are out of luck. Feri Tradition website: Drawing From The Wells of Creation, The Faerie Goddesses of the Primal Elements, by Storm Faerywolf The F(a)eri(e) tradition works with a veritable multitude of deities and otherworldly spirits. The beginning student is usually familiarized early-on with a particular group of celestial beings variously called the Guardians or Watchers, whose elemental associations are explained to be a convenient point of reference, but that comes nowhere close to summing up their own unique existence2. The Guardians are said to be capable of “invoking that which we cannot”3, and it is only after working with them for some time –and in particular in relation to the goddesses of the primal elements- do we truly begin to see the scope and breadth of such a statement. We are taught that in order to commune with spirits we must do so via the holy daemon.4 One of the principal functions of the daemon is to provide a vital link between ourselves and those external spirits and powers that we wish to commune with. East/Air: Arida South/Fire: Tana

Sigil Magic: <b>Vegvisir</b>, the icelandic compass to find your way - Magical Recipes Online Sigil Magic & Ancient Talismans: Vegvisir, the icelandic compass to find your way Vegvisir (meaning sign post in icelandic) is a sigil that was used in ancient times in Iceland and allowed the bearer to find their way through rough weather. A page in the Huld Manuscript includes the image of the sigil and states that if this sign is carried, one will never lose his/her way in storms or bad weather even when the way is not know. Vegvisir is a popular symbol in Iceland and even the famous Icelandic artist Bjork has been photographed with Vegvisir as a tattoo on her arm.