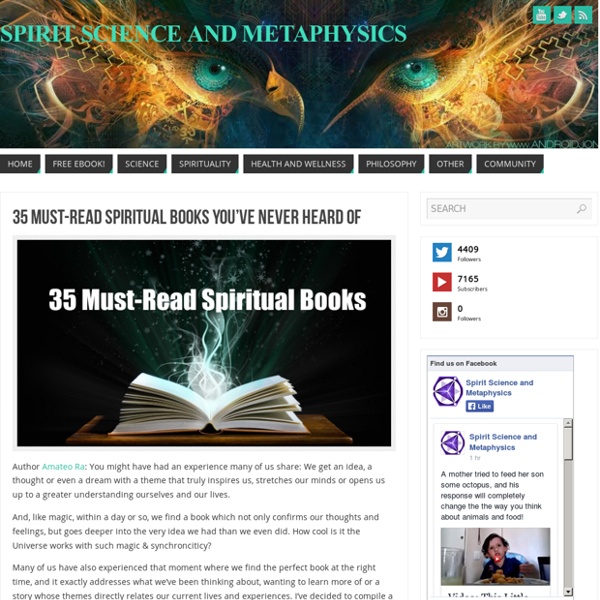 Author Amateo Ra: You might have had an experience many of us share: We get an idea, a thought or even a dream with a theme that truly inspires us, stretches our minds or opens us up to a greater understanding ourselves and our lives. And, like magic, within a day or so, we find a book which not only confirms our thoughts and feelings, but goes deeper into the very idea we had than we even did. How cool is it the Universe works with such magic & synchronciticy? Many of us have also experienced that moment where we find the perfect book at the right time, and it exactly addresses what we’ve been thinking about, wanting to learn more of or a story whose themes directly relates our current lives and experiences. By no means is this a complete list, as there are so many incredible books out there from amazing authors. 1) The 5th Sacred Thing by Starhawk This is a very compelling read that gives a raw and real invitation for us to examine how we are creating our Future. 20) Oneness by Rasha Related:  it's all in the mind • Sacred Texts

Scientific Proof Thoughts & Intentions Create Physical Reality and How Advertisers Exploit This Gregg Prescott, M.S., In5D Guest Waking Times Any reputable scientific experiment should be replicable under similar conditions. When Dr. Water Crystal Proof In 1994, Dr. The observation was done in various ways: 1. Long Distance Proof On November 16, 2005 Parapsychologist Dean Radin conducted a long distance experiment with Dr. The treated (prayer and intention) and untreated samples were sent to Emoto’s lab in Japan where 40 unique water molecules were photographed. 100 volunteers evaluated the photographs and rated them on aesthetic appeal. The Rice Experiment In another experiment to prove how words, thoughts and intentions affect our reality, Dr. This experiment has been replicated many times. Words, Intentions, Thoughts and Fear Perhaps intentions, thought, written and spoken words are the reasons why the mainstream media continuously pounds us with fear-related stories because ultimately, when we live in fear, we eventually lose even more civil liberties.

5 Questions to Ask Yourself about Why you are Here. Have you ever wondered why you were here? What purpose there could be to waking up each day? Well part of your purpose here is to find out why. Then once you find out why you are here, you can begin to make the difference that only you can make. If you don’t know where to start ask yourself the following questions. 1. I’m not talking about your Job or even the thing that makes you money necessarily. Are you building a community of people to live healthier? 2. Who have you impacted or inspired in your life? 3. One of the biggest hints the universe gives you about what your life purpose is, is by creating an exciting passion for that thing. 4. We all have an impact on those around us. Just ask yourself What is your Super Power? 5. If I am not living my dreams already what can I do right now to start moving in that direction? Remind yourself that you are connected to the divine. Check out this powerful video on living your life purpose! With all of my love, Kirsten Spirit Team

Vijñāna Vijñāna (Sanskrit; Devanagari: विज्ञान) or viññāṇa (Pāli; Devanagari: विञ्ञाण)[1] is translated as "consciousness," "life force," "mind,"[2] or "discernment."[3] Buddhism[edit] This section considers the Buddhist concept primarily in terms of Early Buddhism's Pali literature as well as in the literature of other Buddhist schools. Pali literature[edit] Throughout Pali literature, viññāṇa[1] can be found as one of a handful of synonyms for the mental force that animates the otherwise inert material body.[6] In a number of Pali texts though, the term has a more nuanced and context-specific (or "technical") meaning. (1) as a derivative of the sense bases (āyatana), part of the experientially exhaustive "All" (sabba); (2) as one of the five aggregates (khandha) of clinging (upadana) at the root of suffering (dukkha); and, Sense-base derivative[edit] Hence, in this context, viññāṇa includes the following characteristics: The aggregates[edit] "And why do you call it 'consciousness'? "... "No, lord."

Psychic Advice :: NEGATIVE ENERGY CLEANSING Free Weekly Syndicated Advice Columns Published Every Wednesday Afternoon (PST) Question: "The question that I have deals with negative auras. I have recently been to a few psychics in the New York area and all have informed me that I have a 'negative aura'. I started to question many events that have occurred in my life - especially romantic relationships. All the psychics were in agreement that this is the reason why I have not found love, or love has been slipping away from me. I finally decided to take a psychic recommendation to begin a 'cleansing process', but yet I'm still a bit hesitant to find out if this is a scam to receive money from people. Psychic Advice: Each person has an energy field around them called the aura that functions in a number of ways. Our thoughts and emotions affect our aura in a number of ways, and other people can sense the energy of our aura, whether they are consciously aware of it or not. Now, imagine your aura shining around you very brightly.

The SECRET for Undetectable Mind Control Unless you understand how reality is manifested, your destiny and the destiny of the planet will be in the hands of the ruling elite who do understand it. “Sometimes people don't want to hear the truth, because they don't want their illusions destroyed.” -Friedrich Nietzsche Living in the third dimension can be a blissful experience when you have power, health, wealth, comforts and freedom. That's what the ruling elite have manifested for themselves while the rest of the world struggles with poverty, disease, drug dependency, debt and servitude. The ultimate goal of the Illuminati is not only one world government. Notice how successful they have been at manifesting a Utopian 3rd dimension for themselves – money, yachts, private jets, castles, resorts, racehorses, corporations, gold, gems, servants and everything they desire. You are part of their manifestation. The Universal Law of Attraction What do you think about? “Everything is energy and that's all there is to it. Related Posts

Awesome Variations on Meditation Meditation is simply the training of the mind. It has been used, primarily for spiritual practices, for thousands of years. The effects are numerous. Since everything you’ve ever experienced and know is in your awareness, the end goal is understanding That which is Aware. “Give up defining yourself. Once you’ve explored this concept long enough you slowly get a sense of what he is hinting at. “The perfect man uses his mind as a mirror. This is why staying in the Now is such a powerful practice. Here are the awesome variations on meditation, amongst which you will certainly find at least one that agrees with you. Darkness Meditation – Intermediate – Min. 1 day I don’t think anyone will actually go ahead and do this one (yes, that is a challenge!) You should have a space where there is complete darkness. Dancing Meditation – Beginner – Min. 1 minute This is something everyone can do. Breathing Meditation – Beginner – Min. 1 minute Long deep breathing is fairly simple.

How to Stop Absorbing Other People’s Emotions Emotions such as fear, anger, frustration, and immobility are energies. And you can potentially ‘catch’ these energies from people without realizing it. If you tend to be an emotional sponge, it’s vital to know how to avoid taking on an individual’s negative emotions, or even how to deflect the free-floating negativities in crowds. Another twist is that chronic anxiety, depression, or stress can turn you into an emotional sponge by wearing down your defenses. From an energetic standpoint, negative emotions can originate from several sources: what you’re feeling may be your own; it may be someone else’s; or it may be a combination. Stop Absorbing Other People’s Emotions 1. People call you “hyper-sensitive”, “overly sensitive”, etc., and they don’t mean it as a compliment! 2. 3. 4. 5. Place your palm on your solar plexus as you keep sending loving-kindness to that area to flush stress out.For longstanding depression or anxiety, use this method daily to strengthen this center. 6. 7. 8. 9.

Spandakārikā-s (Spanda Karikas) - Non-dual Shaivism of Kashmir - Sanskrit & Sánscrito Introduction Hi, Gabriel Pradīpaka --wrongly-written Pradipaka-- again. The discovery of Śivasūtra-s --wrongly-written Shiva Sutras-- by Vasugupta marked the beginning of Trika system (also known as "Non-dual Shaivism of Kashmir"), at least in its formal aspect. Vṛtti (by Kallaṭa --a disciple of Vasugupta--) Spandapradīpikā (by Bhaṭṭotpala) Vivṛti (by Rāmakaṇṭha) Spandanirṇaya --wrongly-written Spanda Nirnaya-- (by Kṣemarāja --wrongly-written Kshemaraja or Ksemaraja--)* *It is to be noted that there is another commentary by Kṣemarāja called "Spandasandoha", but it is only a commentary on the first aphorism of Spandakārikā-s. Spandanirṇaya by Kṣemarāja was written in prose, and it is considered to be the most authoritative among the four. I will be showing here only the translation of Spandakārikā-s. Important: All that is in brackets and italicized within the translation has been added by me in order to complete the sense of a particular phrase or sentence. top Section I: Svarūpaspanda 1 Lit.

Related:
Related:  it's all in the mind   -  Sacred Texts