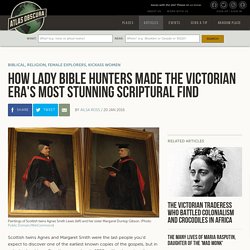 (Photo: Public Domain/WikiCommons) The Rebel Virgins and Desert Mothers Who Have Been Written Out of Christianity's Early History. The rebels of early Christianity, like Melania, Paula, Susan and that guy Jerome. 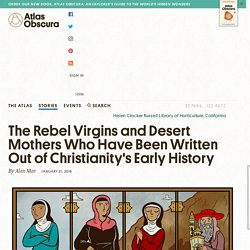 (All Illustrations: Matt Lubchansky) I. From Silk Robes to Hairshirts. FATHER EUSEBIUS – FORGER. Christianity-Revealed.com Who was Father Eusebius? 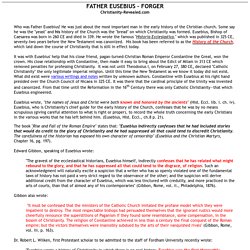 He was just about the most important man in the early history of the Christian church. Some say he was the "yeast" and his history of the Church was the "bread" on which Christianity was formed. Eusebius, Bishop of Caesarea was born in 260 CE and died in 339. He wrote the famous "Historia Ecclesiastica," which was published in 325 CE, seventy-two years before the New Testament was canonized. Eusebius the Liar? Eusebius the Liar? 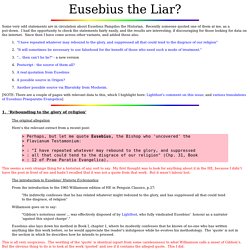 Some very odd statements are in circulation about Eusebius Pampilus the Historian. Recently someone quoted one of them at me, as a put-down. I had the opportunity to check the statements fairly easily, and the results are interesting, if discouraging for those looking for data on the internet. Since then I have come across other variants, and added these also. 1. Scrolls from the Dead Sea. John - A Gospel to Silence the Gnostics. "Saint Peter" – Fabricated Apostolic commander-in-chief. In reaction to the runaway success of Marcion’s Pauline Christianity, scribes in Rome concocted a sacred history to bolster their own claim to singular authority. 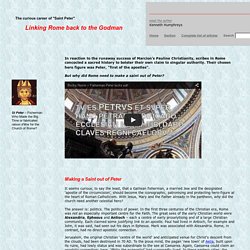 Their chosen hero figure was Peter, "first of the apostles". But why did Rome need to make a saint out of Peter? The Ruin of Public Health – Religion Damages Your Health. Collapse of Ancient Medicine “There is only one Physician, Jesus Christ.” – St Ignatius (quoted by S. 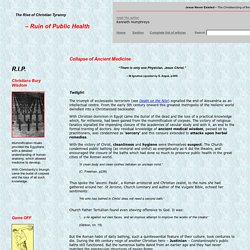 Argus, p305) Twilight: The triumph of ecclesiastic terrorism (see Death on the Nile) signalled the end of Alexandria as an intellectual centre. Death of Science – The Natural World Demonised – Religious Terror. The World that was Lost – Christianity Wrecks Civilisation. Early in the 1st century AD, Emperor Augustus established a Roman colony at Berytus (modern Beirut). 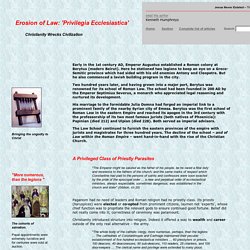 Here he stationed two legions to keep an eye on a Greco-Semitic province which had sided with his old enemies Antony and Cleopatra. But he also commenced a lavish building program in the city. Two hundred years later, and having grown into a major port, Berytus was renowned for its school of Roman Law. The school had been founded in 200 AD by the Emperor Septimius Severus, a monarch who appreciated legal reasoning and nurtured its development. Emperors Hadrian and Charlemagne – Dwarf on Giants Bones. "The barren and lumbering theology of the Church crowded out the Muses from their earthly walks, and the world became a prison after having been the home of man. 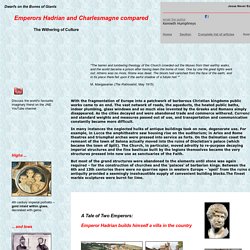 One by one the great lights went out; Athens was no more, Rome was dead. Lost World 2– Civilization erased by Christian piety, fanaticism and ambition. Lost World 1 – Civilization Erased by Piety and Fanaticism – Pax Romana vs Christendom. Ruined The Christian destruction of pagan temples tore the heart out of many cities which, over the course of centuries, had grown up around the sacred precincts – rather as medieval villages would grow around the parish church. 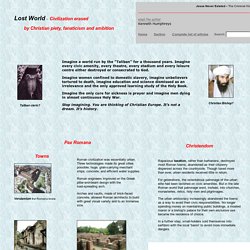 In Rome, as in other cities, the central forums, desolate and dangerous, were abandoned as a tiny Christian 'new town' grew up in the old suburbs, around a church or bishop's residence. Towns contracted, and farmlands were reclaimed by the wild. Obvious conveniences, such as glass windows in domestic housing, disappeared for a thousand years. Darkness Descends on the Greco-Roman World – A Timeline of Catastrophe. Caius Galerius, a shepherd who became a soldier, rose through the ranks of the army to become the penultimate pagan emperor of Rome. 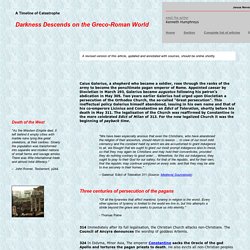 Appointed caesar by Diocletian in March 293, Galerius became augustus following his patron's abdication in May 305. Two years earlier Galerius had urged upon Diocletian a persecution of the Orthodox Church, the so-called "Great persecution". This ineffectual policy Galerius himself abandoned, issuing in his own name and that of his co-emperors Licinius and Constantine an Edict of Toleration, shortly before his death in May 311. Death on the Nile – The End of Hypatia & Classic Scholarship in Egypt. The Christianizing of Europe – The Closing Mind. Arianism vs. Catholicism – Christianity's "civil war" Rome did more than hire barbarians to fight its wars; like any latter-day imperialist power, it intervened directly and indirectly in 'tribal affairs' far beyond its frontiers. Rome had its 'client kings,' its royal hostages and refugees, its barbarian 'consuls.' It encouraged conflict between the tribes and it used its influence, money and diplomacy to effect the outcome of each crisis of tribal leadership.

Barbarians did more than fight for Rome. They competed with each other for imperial favour, they supported rival imperial candidates and took sides in Rome's civil wars. The Papal Princes Christian Lords of Hell on Earth. Bloody Annals from the Church of Christ Callistus – Embezzler, Extortionist, Friend of Emperor’s Whore, Makes Pope, Dies with Transvestite! Theodosius – The Assault upon Paganism. A triumphant Christian Church, far from unifying the Roman world with a single faith, rent division and civil conflict throughout the empire. Every measure designed to crush and stamp out non-Christian belief met with renewed resistance, disaffection from the imperial cause and civil commotion. The Christianizing of the Roman Empire – The Bishops Control the Minds of Juvenile Emperors.

Constantine Pagan Thug Makes Christian Emperor. The maturing of a morbid, sociopathic death cult. Christianity –  the triumph of perversity. ~ Resources for the study of Christian origins ~ The Historical Jesus Christ. Q: The Lost Sayings : Source - Burton Mack's translation (pdf) Lost Christianities: The Battles for Scripture and the Faiths We Never Knew: Bart D. Ehrman: Amazon.co.uk. Flip to back Flip to front Listen Playing... Paused You're listening to a sample of the Audible audio edition. Learn more See all 2 images Want it Friday, 1 May? The Lost Gospel: The Book of Q & Christian Origins: Burton L. Mack amazon.co.uk. Who Wrote the New Testament?: The Making of the Christian Myth: Amazon.co.uk: Burton L. Mack: 9780060655181: Books.

Christian history does have a very 'dark side' indeed.