A healthy breakfast made in mason jars in six different flavors! Breakfast Burrito Bonanza. Breakfast casserole,Johnsonville blog for a cause. Do you have holiday food traditions? 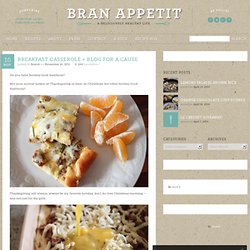 Not your normal turkey-at-Thanksgiving or ham-at-Christmas, but other holiday food traditions? Thanksgiving will always, always be my favorite holiday, but I do love Christmas morning – and not just for the gifts. Christmas morning means: Early wake up Bed head pictures while opening stockings Moving into the room with the tree and shiny bows and name tags from Santa Taking turns opening gifts Maybe, sometimes, accidentally giving away the presents before the person actually unwraps the gift… And then breakfast, with extended family. Make-Ahead, Healthy Egg McMuffin Copycats. One of my guilty pleasures is an occasional Egg McMuffin at McDonalds. 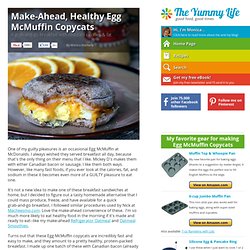 I always wished they served breakfast all day, because that's the only thing on their menu that I like. Mickey D's makes them with either Canadian bacon or sausage. I like them both ways. However, like many fast foods, if you ever look at the calories, fat, and sodium in these it becomes even more of a GUILTY pleasure to eat one. Chocolate Gravy — Yes, Chocolate Gravy! « VarmintBites. You may have thought you knew Southern food, but unless you’ve had chocolate gravy, you really are just a dilletante — which is what I was until I lost my chocolate gravy virginity this morning. 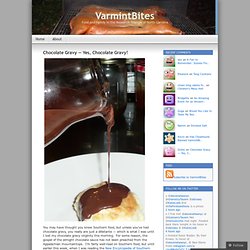 For some reason, the gospel of the almight chocolate sauce has not been preached from the Appalachian mountaintops. I’m fairly well-read on Southern food, but until earlier this week, when I was reading the New Encylcopedia of Southern Culture’s volume on Foodways, I read a description of a type of “gravy” common in the Appalachian regions of the South.

This flour-thickened sauce is typically served with biscuits for breakfast. According to the Oxford Encyclopedia of Food and Drink in America, there are several legends regarding the origin chocolate gravy:”Spanish Louisiana had a trading network in to the Tennessee valley. This trade may have introduced Mexican-style breakfast chocolate to the Appalachians, where it is called ‘chocolate gravy.’ Recipe after the break. Chocolate Gravy 3 Tbsp flour. Easy Oven Omelet. On days when a fast and simple breakfast is needed, an oven omelet can be a great way to save time. Just prepare and stick in the oven while you get ready or shower, and it is ready by the time you are done. This recipe is very versatile and can be changed to fit your family’s tastes. You can use leftovers from the night before and pre-chop as you put them away to save extra time.

Easy Oven Omelet. Freeze Oatmeal in Silicone Baking Cups. Slow Cooker Greek Yogurt. Recipe for Steel-Cut Oats in the Crockpot and Steel-Cut Oats with Agave and Pecans. One of my favorite breakfasts is Peanut Butter Oatmeal, which I usually make with Extra Thick Rolled Oats cooked in the microwave, using a method I learned from Alanna. 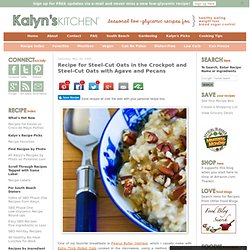 CrockPot Recipe for Make-Ahead Apple Pie Oatmeal. I'm still sticking to my promise to post a meatless recipe every Sunday so people who are committing to Meatless Mondays can find an idea for the next day, and this week I'm sharing a very flavorful meatless breakfast option. 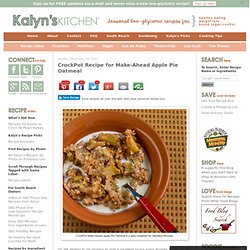 This CrockPot recipe for Make-Ahead Apple Pie Oatmeal is something you make in the crockpot in the evening, and the next morning you warm it up in the microwave (or in a pan on the stove.) Mrs. Bug’s Overnight Parritch from The Fiery Cross. “Mmmphm!” 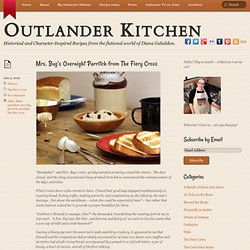 Said Mrs. Bug’s voice, grimly satisfied at having routed the rioters. The door closed, and the clang of wood and clang of metal from below announced the commencement of the day’s activities. When I went down a few moments later, I found that good lady engaged simultaneously in toasting bread, boiling coffee, making parritch, and complaining as she tidied up the men’s leavings. Not about the untidiness — what else could be expected of men? Breakfast on the Go. Overnight Chai Steel-Cut Oats. I’ve been cleaning house this week. 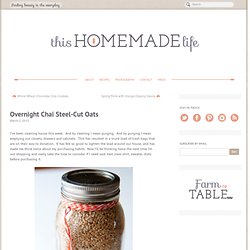 And by cleaning I mean purging. And by purging I mean emptying out closets, drawers and cabinets. This has resulted in a trunk load of trash bags that are on their way to donation. It has felt so good to lighten the load around our house, and has made me think twice about my purchasing habits. Raw Oatmeal with Fruit. I love oatmeal. Most mornings, my first meal of the day is a bowl of oatmeal topped with fresh fruit, flax seeds, a drizzle of maple syrup and the occasional handful of chopped pecans or almonds. I eat it every season of the year. Except for summer, it’s just too hot.

The last thing I feel like is warm cereal for breakfast. Instant Oatmeal: A Less-Waste, Frugal, Homemade Alternative. At least one person in our house eats oatmeal every single day. 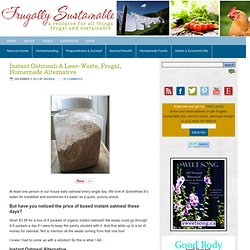