The Story of Stuff 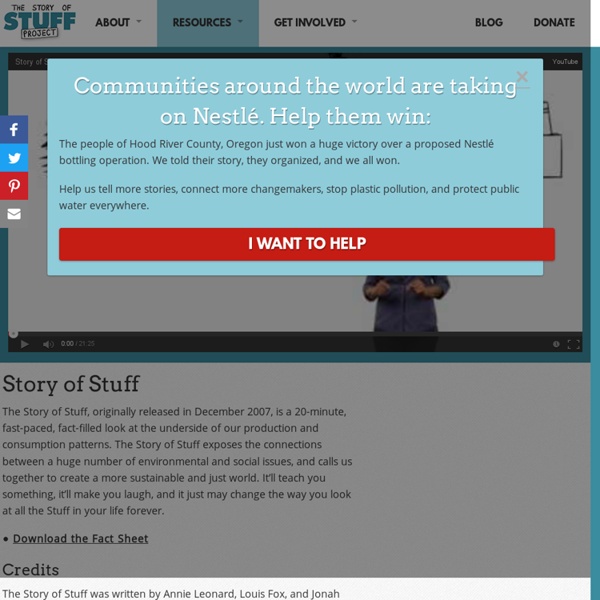 The Story of Stuff, originally released in December 2007, is a 20-minute, fast-paced, fact-filled look at the underside of our production and consumption patterns. The Story of Stuff exposes the connections between a huge number of environmental and social issues, and calls us together to create a more sustainable and just world. It’ll teach you something, it’ll make you laugh, and it just may change the way you look at all the Stuff in your life forever. Download the Fact Sheet Credits The Story of Stuff was written by Annie Leonard, Louis Fox, and Jonah Sachs, directed by Louis Fox and produced by Free Range Studios. Show full list of credits

14 Ways to Acquire Knowledge: A Timeless Guide from 1936 Consider the knowledge you already have — the things you really know you can do. They are the things you have done over and over; practiced them so often that they became second nature. Every normal person knows how to walk and talk. But he could never have acquired this knowledge without practice. For the young child can’t do the things that are easy to older people without first doing them over and over and over. We can save the earth without giving up bacon You'd have to be living under a rock to have missed the memo: Too much meat is bad for your health , responsible for immense animal cruelty on factory farms, to blame for speeding up climate change, at fault for squeezing out rare species and more. Yet despite increased pressure to eliminate meat from our diet, consumption rates have been slow to budge. Americans are eating less beef, but chicken sales are on the rise. China has committed to cutting its meat consumption in half, but other developing nations are expected to eat more meat and dairy in coming years.

10 Ways to Spot a Fake News Article - EasyBib Blog For many of us, 2016 is going down as a year to forget. Election upsets, Zika, the Syrian crisis, and unfortunately tons of fake news about all of the above and everything in between. Denzel Washington was recently quoted as saying, “If you don’t read the newspaper, you’re uninformed. If you do read the newspaper, you’re misinformed.” Australian comedian perfectly sums up why other countries think US gun laws a... At least 14 people were killed and 18 others injured when two shooters opened fire on at the Inland Regional Center, a social services provider for people with disabilities, in San Bernardino Wednesday, December 2. The shooters have been identified as Syed Farook, 28, and Tashfeen Malik, 27, who were in a relationship with each other. Motives are still unclear. Every shooting is its own private tragedy for the victims and their families. But events like this are also part of a much bigger problem. The United States has far more gun violence than the rest of the developed world.

The future of food is ugly as Walmart takes movement mainstream The future of produce is ugly. Twisted, blemished, mutated and deformed, to be specific. That's because an increasing number of grocery chains and crop-sharing services have begun stocking and distributing fruits and vegetables that were once deemed unfit for sale based solely on appearance. referenceandinformationresources / Plagiarism Resources Tutorials: Two brief videos from ABC News (one focuses on the videos available on YouTube that "teach" cheating): From Connect with Kids: High Tech Cheating A brief video and article (August 18th, 2010) 24 Best Poems to Teach in Middle and High School It can be hard to know which poems will spur your middle and high schoolers into deep, meaningful discussion and which will leave them, ahem, yawning. So we asked experienced teachers to share their favorites—the punch-in-the-gut poems that always get a reaction, even from teens. Here's what they had to say. 1. Snow by David Berman Captures a narrative in miniature with a creative structure. 2.

Nike and Adidas show cautious support for eco-friendly dye technology It has been a significant step forward for the textile sector. Up until now the effluent from dye houses that can often be seen in rivers flowing through the textile manufacturing areas of India, China and elsewhere is a result of unabsorbed dyes, chemicals and heavy salts that are used during the dyeing process. A number of companies, DyeCoo, ColorZen and AirDye have set out to address this pollution by designing waterless dye technology. The result is a reduction in wastewater, energy, chemicals and toxic discharge to such a degree that it could revolutionise the textile industry.

Manual tasks and ergonomics Manual tasks includes a range of activities in the school and work environment including moving furniture, entering data into a computer, carrying a bag full of sporting equipment, using a hedge trimmer and transferring a student from a wheelchair onto a toilet. These tasks involve the exertion of force to lift, lower, push, pull, carry, move, hold, slide or transfer a person or object. Manual tasks can contribute to a range of musculoskeletal disorders (injuries) including: Sprains and strains of musclesInjuries to muscles, ligaments, discs and other structures of the backInjuries to soft tissues such as nerves, tendons, ligaments in the wrists, arms and shoulders. These types of injuries are often cumulative with damage occurring over a period of time before pain or injury is apparent. Some work activities may present additional hazards that can also overload the body and lead to injury.