Coin » Use One Coin for All of Your Cards 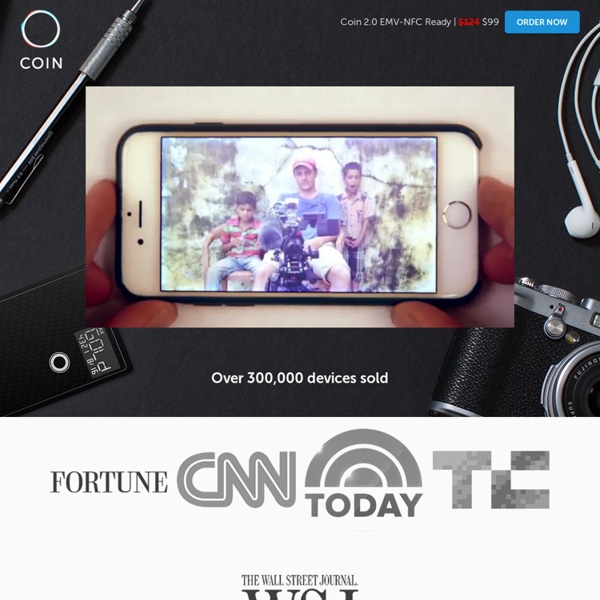 Occipital Raises $1M (And Counting) On Kickstarter To Bring 3D Scanning To The Masses Boulder & SF-based startup Occipital is probably still best known for its Red Laser and 360Panorama apps, but it confirmed today that it raised over $1 million on Kickstarter to bring its Structure 3D sensor to market. The Structure isn’t just any 3D sensor though. It’s an incredibly small one — so small, in fact, that it can onto the back of your iPad (note: it’s compatible with any iOS device with a Lightning port) and connect without completely killing your battery life. While run-of-the-mill users can use the Structure and its early batch of companion apps to scan objects for printing at Shapeways or to fling balls for virtual kittens to chase around the 3D representation of a room, Occipital was really gunning to pick up developer support this time. It’s certainly a nice little show of financial validation for the team, especially considering this is their first big foray into consumer-facing hardware and the fact that they didn’t exactly need the cash in the first place.

German multicopter makes first manned flight. - StumbleUpon It had to happen, and it was almost certainly going to be in Germany. Congratulations have to goto the team at e-volo they have possibly created a new manned flight platform, the first for many years. The platform of choice for many sUAS operators, the multicopter has been super sized to such an extent that manned flight is now possible. SeeSpace InAiR: The World's 1st Augmented Television by Nam Do, Dale Herigstad, A-M Roussel We have now surpassed the $150K goal to add streaming to the list of features. And if we reach the $200K level, we will also add an Extra HDMI input and Preset Apps to InAiR. Thanks for the continued support for this project. InAiR brings you the world's first Augmented TV experience With InAir plugged in, your TV becomes an Augmented Television.

Acoustic Levitation and the Tractor Beam, the Impossible just became Incredible... - StumbleUpon Levitation and the defiance of gravities surly bond has been a science that struggled to keep up with its own mythology, until now. A team of Japanese researchers have this week demonstrated the first technology that not only brings the mythology of levitation to life but leap frogs it to create a tractor beam, lifting and moving objects across 3 dimensions using sound alone. Presented for your viewing pleasure is the astounding video of acoustic levitation in action, now including tractor beam. Sit back relax and prepare to watch the future arrive, gliding effortlessly. Scientists from the University of Tokyo and Nagoya Institute of Technology are now able to levitate and move any object in 3 dimensions.

Forget WiFi, It's LiFi: Internet Through Lightbulbs - StumbleUpon Whether you’re using wireless internet in a coffee shop, stealing it from the guy next door, or competing for bandwidth at a conference, you’ve probably gotten frustrated at the slow speeds you face when more than one device is tapped into the network. As more and more people—and their many devices—access wireless internet, clogged airwaves are going to make it increasingly difficult to latch onto a reliable signal. But radio waves are just one part of the spectrum that can carry our data. Correlated Magnetics Research Brings MaxField Polymagnets To A Wall Near You We first told you about Correlated Magnetics Research’s programmable magnets last year. The company’s patented technology allows them to flexibly control the magnetic field shape of the magnets they create. In essence, the company can program the north/south polarity of the magnets as though they are “printing” it on them. It allows for many different configurations and has many industrial applications.

The World's Top 10 Most Innovative Companies In The Internet Of Things - StumbleUpon 1. Nest (Google) For solving yet another pain point in building the smart home. Following its game-changing "learning thermostat," Nest released the Protect smoke detector, again infusing a previously design-neglected home appliance with modern detail and functionality. From the Protect’s hands-free silencer and voice controls to its smartphone notifications and battery monitor, Nest has produced the first nonannoying smoke detector—and picked up $3.2 billion in cash from Google along the way. Ion: A Music Detecting Mood Light with Bluetooth Low Energy by lava ION's genesis began with our first Kickstarter project, Ember & Torch (Bluetooth Low Energy development boards) back in June of 2013. One of the demonstrations for Ember that we built was an app-controlled LED lamp. We demonstrated Ember, Torch, and the LED lamp at Social Media Day Detroit 2013.

Microsoft Research uses Kinect to translate between spoken and sign languages in real time - StumbleUpon 30 October '13, 08:31pm Follow Microsoft’s Kinect is a wonderful piece of technology that seems to know no bounds. Microsoft Research is now using it to bridge the gap between folks who don’t speak the same language, whether they can hear or not. Nix Color Sensor by Matthew Sheridan Follow us on Twitter @nixsensor Check out our story on CHCH Nix is a patent pending device that allows anyone to become a color expert.