Ted Cruz's Net Neutrality Take Isn't Just Dumb, It's Dangerous. Can anyone stop Comcast? Jump To up down Close. 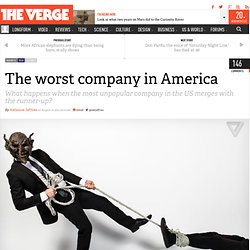 The most hated cable company in America is… By Catey Hill, MarketWatch Bloomberg Mediocre quality, infuriating customer service, high prices: If you’re like most Americans, you hate your cable and Internet company (some more so than others) — and that’s only getting worse. 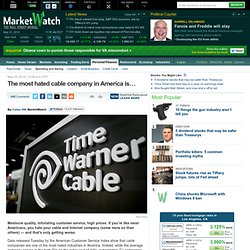 Data released Tuesday by the American Customer Service Index show that cable companies are one of the most hated industries in America. Indeed, while the average company scores in the high 70s on the index (out of 100), subscription-TV companies (these include traditional cable companies and fiber-optic and satellite cable companies) scored just 65 on the index. Why the Comcast-Netflix Pact Threatens Our Internet Future. Kevin Spacey in the Netflix original series House of Cards. 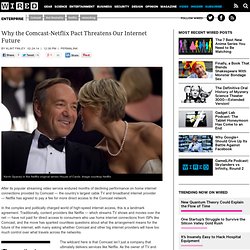 Image courtesy Netflix After its popular streaming video service endured months of declining performance on home internet connections provided by Comcast — the country’s largest cable TV and broadband internet provider — Netflix has agreed to pay a fee for more direct access to the Comcast network. In the complex and politically charged world of high-speed internet access, this is a landmark agreement.

Traditionally, content providers like Netflix — which streams TV shows and movies over the net — have not paid for direct access to consumers who use home internet connections from ISPs like Comcast, and the move has sparked countless questions about what the arrangement means for the future of the internet, with many asking whether Comcast and other big internet providers will have too much control over what travels across the networks. Cable Industry Finally Admits That Data Caps Have Nothing To Do With Congestion.

For years, the key rationale given by broadband providers for implementing data caps was that it was the only way they could deal with "congestion. 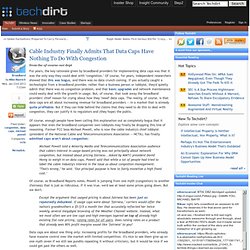 " Of course, for years, independent researchers showed that this was bogus, and there was no data crunch coming. If you actually caught a technologist from a broadband provider, rather than a business person or lobbyist, they'd quietly admit that there was no congestion problem, and that basic upgrades and network maintenance could easily deal with the growth in usage. Can We Trust CNET Again After a Scandal This Shady? CNET, one of the Internet's first and most influential authorities on gadgets and tech news, watched its editorial integrity spiral out of control Monday, with staffers quitting and editors left to explain themselves in the wake of explosive new charges over its annual Consumer Electronics Show awards — a scandal, it would appear, that goes all the way to the top of its corporate umbrella, and could shake the entire ecosystem of online tech journalism. 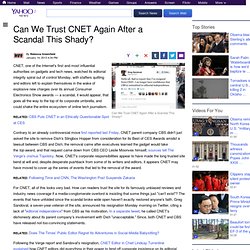 RELATED: CBS Puts CNET in an Ethically Questionable Spot at CES. Instagram says it now has the right to sell your photos. Update, December 18 at 2:50 p.m. 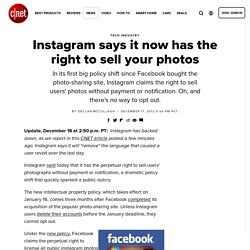 PT: Instagram has backed down, as we report in this CNET article posted a few minutes ago. Instagram says it will "remove" the language that caused a user revolt over the last day. Instagram said today that it has the perpetual right to sell users' photographs without payment or notification, a dramatic policy shift that quickly sparked a public outcry. The new intellectual property policy, which takes effect on January 16, comes three months after Facebook completed its acquisition of the popular photo-sharing site. Unless Instagram users delete their accounts before the January deadline, they cannot opt out.

Under the new policy, Facebook claims the perpetual right to license all public Instagram photos to companies or any other organization, including for advertising purposes, which would effectively transform the Web site into the world's largest stock photo agency. 'Piracy' student Richard O'Dwyer loses extradition case. 13 January 2012Last updated at 11:12 ET Mr O'Dwyer's mother criticised the UK's extradition treaty with the US A Sheffield student can be extradited to the US to face copyright infringement allegations, a judge has ruled. 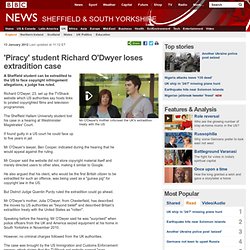 Richard O'Dwyer, 23, set up the TVShack website which US authorities say hosts links to pirated copyrighted films and television programmes. The Sheffield Hallam University student lost his case in a hearing at Westminster Magistrates' Court. Time Warner Cable Muni-Fiber Killing Bill Moves Forward - All Progress Made On Making NC Bill More Reasonable Stripped. Rupert Murdoch To Examine His Newspapers. 'This power to distort political debate must be challenged and broken.' Photo: Reuters News Ltd owns 70 per cent of the circulation of major newspapers in Australia. 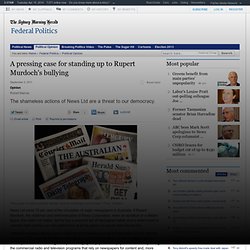 If Rupert Murdoch, the chairman and chief executive of News Corporation, were an apolitical or a distant figure, this might not matter, but he has a powerful set of ideological beliefs and is determined to maintain tight control over the political line of all his papers on issues that interest him. Politically engaged citizens have a plethora of accessible sources of information on the internet, but News Ltd's capacity to influence the opinions of the vast majority of less engaged citizens - whose political understanding is shaped directly by the popular newspapers and indirectly through the commercial radio and television programs that rely on newspapers for content and, more deeply, for the way they interpret the world - is unjustifiable.