The 21 Best Horror Books of the 21st Century. “The Door Problem” “So what does a game designer do? 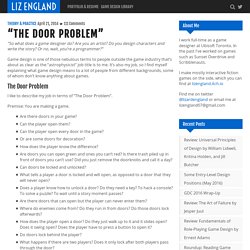 Are you an artist? Do you design characters and write the story? Or no, wait, you’re a programmer?” Game design is one of those nebulous terms to people outside the game industry that’s about as clear as the “astrophysicist” job title is to me. It’s also my job, so I find myself explaining what game design means to a lot of people from different backgrounds, some of whom don’t know anything about games. The Door Problem I like to describe my job in terms of “The Door Problem”.

Premise: You are making a game. Are there doors in your game? It’s a pretty classic design problem. The Other Door Problems To help people understand the role breakdowns at a big company, I sometimes go into how other people deal with doors. The origins of Fire Emblem, shared in a classic interview with its creator. "I wanted to create a game where the story and game will develop differently for each player depending on the units they use. 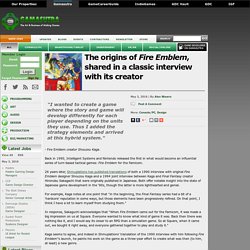 Thus I added the strategy elements and arrived at this hybrid system. " - Fire Emblem creator Shouzou Kaga. Back in 1990, Intelligent Systems and Nintendo released the first in what would become an influential series of turn-based tactical games: Fire Emblem for the Famicom. 26 years later, Shmuplations has published translations of both a 1990 interview with original Fire Emblem designer Shouzou Kaga and a 1994 joint interview between Kaga and Final Fantasy creator Hironobu Sakagachi that were originally published in Japanese.

League of Legends Champ Designer Gives Some Real Talk On Sexy Characters. With Civil War, Marvel dusted off inane source material for superfights · Back Issues. Back Issues discusses a major comic of the past, reevaluating its strengths and weaknesses while exploring the cultural context of its creation and how it has impacted the future of the comic-book medium and industry. 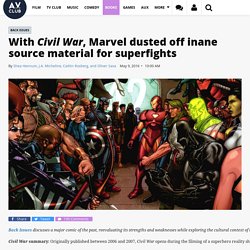 This week: Civil War, Mark Millar and Steve McNiven’s explosive event series that pitted Captain America against Iron Man and inspired the upcoming film, Captain America: Civil War. Civil War summary: Originally published between 2006 and 2007, Civil War opens during the filming of a superhero reality show. A group of C-list heroes known as the New Warriors get in over their heads in a fight with an obscure villain named Nitro, and their adversary unleashes an explosion near a school, leaving approximately 800 casualties, most of them children. As a response, the president pushes for the Superhuman Registration Act, which would see all masked vigilantes organized and trained by S.H.I.E.L.D.

Similarly, it doesn’t even attempt to sensically function as a narrative. J.A. 5 Sci-Fi & Fantasy Books That Treat Mental Illness with Compassion — The B&N Sci-Fi and Fantasy Blog. As a way to help erase stigma related to mental illnesses, the National Alliance on Mental Illness has designated May as Mental Health Month. 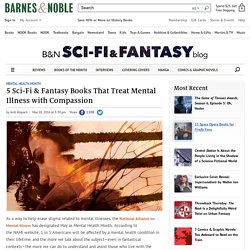 According to the NAMI website, 1 in 5 Americans will be affected by a mental health condition in their lifetime, and the more we talk about the subject—even in fantastical contexts—the more we can do to understand and assist those who live with the reality of it every day. Here are five works of speculative fiction that address mental illness with compassion. Borderline, Mishell Baker This recent debut novel redefines urban fantasy as we know it. The genre often relies on sexy protagonists and their equally sexy supernatural counterparts to move the plot along—werewolves, witches, and all sorts of otherworldly beings. In Borderline, a group of deeply flawed human characters takes center stage. Christopher Gile's Blog - Achievements are Permission. The following blog post, unless otherwise noted, was written by a member of Gamasutra’s community. 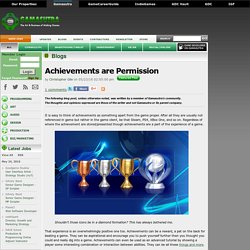 Young Astronauts In Love — sdkay: My old tutorial! Wanna share it with you) Overwatch’s Most Mysterious Myth Yet. With Overwatch sweeping the world of gaming fandom, there’s been no shortage of cosplay, fan art and comedic highlights. 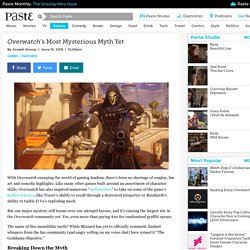 Like many other games built around an assortment of character skills, Overwatch has also inspired numerous “mythbusters” to take on some of the game’s hidden features, like Tracer’s ability to recall through a destroyed teleporter or Reinhardt’s ability to tackle D.Va’s exploding mech. Why They're Playing: Persona 4: Golden. We know you're busy making games. 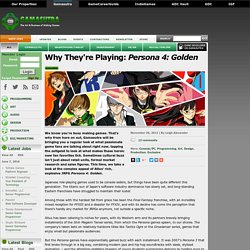 That's why from here on out, Gamasutra will be bringing you a regular look at what passionate game fans are talking about right now, tapping the zeitgeist to look at what makes these heroic new fan favorites tick. Sometimes cultural buzz isn't just about retail units, formal market research and sales figures. This time, we take a look at the complex appeal of Atlus' rich, explosive JRPG Persona 4: Golden. Japanese role-playing games used to be console-sellers, but things have been quite different this generation. The titanic sun of Japan's software industry dominance has slowly set, and long-standing Eastern franchises have struggled to maintain their luster.