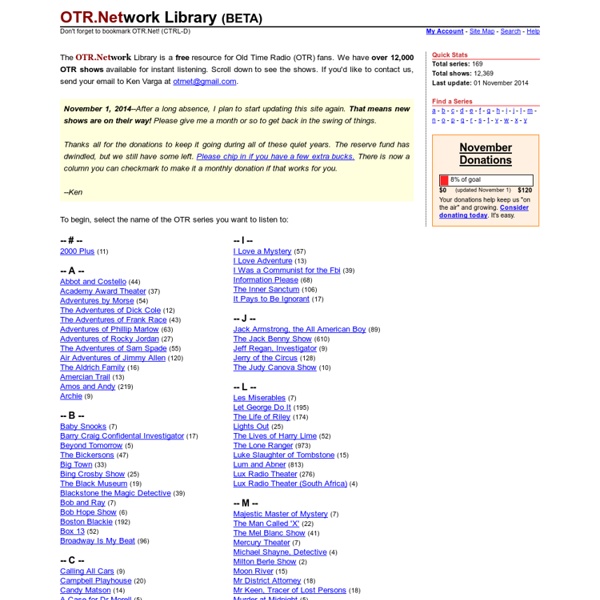 Windows Media Guide First published on October 2, 2017. Revised on June 1, 2018, upon announcement of the discontinuation of the Groove Music iOS and Android apps. On October 2, 2017, we announced that we'd be partnering with Spotify to bring the world’s largest music streaming service to you. We know that access to the best streaming experience, the largest catalog of music, and a variety of subscriptions are top of your list. On January 1, 2018, the Groove Music Pass streaming service was discontinued. Your Old Time Radio Headquarters - Vintage Radio Shows.com Sound Design of Star Wars compiled by Sven E Carlsson Sounddesigner Ben Burtt's responsibility on Star Wars was to create specifically unusual sounds - weapons, vehicles, character and key backgrounds. Ben Burtt was a film sound buff as a child (he recorded and replayed the sound tracks of his favorite movies) Burtt enrolled at the university of Southern California's film school with the intention of becoming a director. He received a student job cataloguing the Columbia sound library, which had been donated to the University. A call by Star Wars producer Gary Kurtz to U.S.C. led to a successful interview for Burtt.

Musicovery Old Time Radio 1610 AM - Everett, WA Top 10 Free Ways To Discover New Music Online – Eternal Code [via makeuseof.com] Bored with your music and want to discover some new bands or singers? There are two main ways you can do that online. You can use services which create music maps, allowing you to explore artists similar in genre to the artists you already listen to. Or you can use music blogs and websites that showcase independent or up-and-coming artists, whether the music is being reviewed, or posted by the musicians themselves.