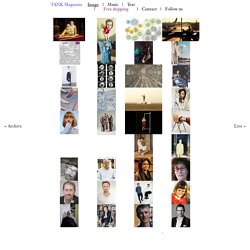 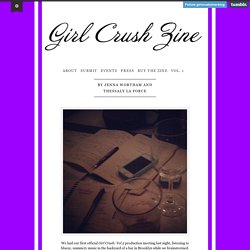 It’s called How Should a Person Be? It was reviewed last week in The New Yorker by James Wood. It was reviewed as well as by Chris Klaus in the LA Review of Books and Emily Witt in the Observer. Betty Magazine. T y p i c a l g i r l s. Huck - Radical Culture. Huck celebrates independent culture – people and movements that paddle against the flow. 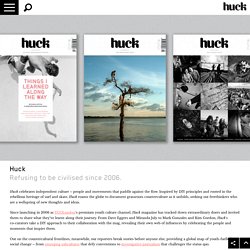 The girl power zines to read this month. The latest instalment of a new zine series, each month we ask an influential member of the zine community for their picks of the best publications on the self-publishing scene, this month being the turn of Sister Magazine's editor in chief Beccy Hill. 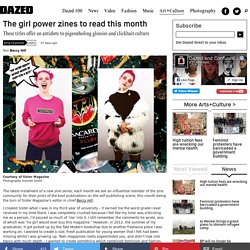 I created Sister when I was in my third year of university – it earned me the worst grade I ever received in my time there. CHAMP Magazine. Girls Get Busy. Mollysoda: “Story of my Life” is now live! 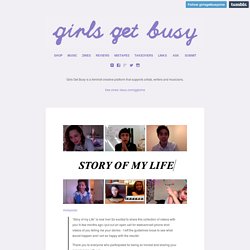 So excited to share this collection of videos with you! A few months ago I put out an open call for webcam/cell phone shot videos of you telling me your stories - I left the guidelines loose to see what would happen and I am so happy with the results! Thank you to everyone who participated for being so honest and sharing your experiences with us! I am always taking submissions for this project and will update as I receive videos so it’s not too late for you to send me yours! Don't Get Culty. Polyester Magazine – Have Faith in Your Own Bad Taste. Badlands 777. The zines you need to know about now. Rip it out, cut it up and paste it back together. 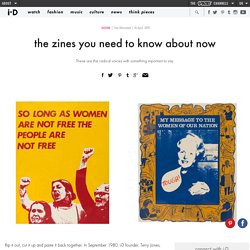 In September 1980, i-D founder, Terry Jones, took his designs to a printer's shop on Portobello Road, and, with two shakes of a lamb's tail, the first issue of i-D materialised. Putting punk into print, i-D was a fanzine dedicated to counter culture, anti-heroes, trailblazers and trend sitters. It was unpolished and unapologetic, with its rough around the edges, DIY aesthetic being the ultimate fuck you to the glossy lifestyle magazines of the time. Fast-forward to today and the zine remains a powerful icon of the counter culture, although it now comes in many different forms, and these are the ones you should be reading. The queer zines that should be on your radar. The first of a new zine series, each month we ask an influential member of the zine community for their picks of the best publications on the self publishing scene I got involved with the zine community five years ago, when I made my first zine Make It Work, a fat positive fashion and craft zine featuring tutorials, and personal writing on class and bodies. 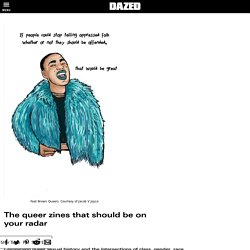 Through tabling at many rad zine fairs like Queer Zine Fest London, North West Zine Fest and DIY Cultures, I’ve made friendships and accessed strategies, solidarity, support and methods of resistance from so many radical zinesters. Since then I’ve made personal zines about queer femme identity, self-care, mental health, abuse and class, with my most recent project being organising the newly founded Weirdo Zine Fest in London. ‘The Nova Revolution’ from Riposte #5 - magCulture. Awards update: SPD deadline this Friday– hurry! 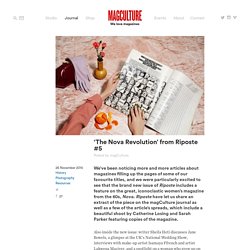 PPA deadline February 19 but don’t delay! Events update: magCulture meets The Idler, 4 February; QVED16 takes place in Munich, 25-27 February. Hypebeast identifies 10 indies to watch. Sometime magCulture contributor Michael Bojkowski has just published a new edition of his occasional Linefeed magazine. Read Maddy’s overview of the design of The Paris Review. Are niche publications the future of print? Mary Gaitskill - Bad Behaviour Book. Keystone/Getty Images Advertisement - Continue Reading Below Bad Behavior is a dark series of stories: your characters are grappling with isolation and human connection and this idea of 'coming-of-age,' even though some of them are older than you were at the time of their publication—you wrote them in your twenties. 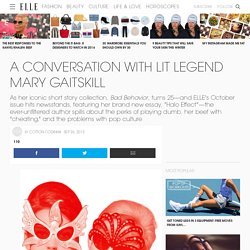 How young were you when you started writing? I didn't start thinking about what I wanted to do professionally until I was 17. I was a hippie, but I did write. What is your advice to young writers? Riposte: A Smart Magazine for Women. 'Creamer' Is London's Funniest Trashy, Gross-Out Art Zine. Photos by Holly Rae Jones, styled by Malak El Sawi Launched last week in an underground urinal in Kennington, Creamer takes toilet humour to a whole new level. 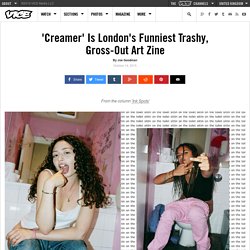 ​Ladybeard Is the Feminist Glossy Mag Talking Real Sex For Everyone. Cover Image by Scarlet Evans courtesy of Ladybeard Magazine If you really sat down and tried, you could turn a lot of pages in the space of 30 days. While we've spent over a decade providing you with about 120 of those pages every month, it turns out VICE isn't the only magazine in the world. This series, Ink Spots, is a helpful guide to which of those zines, pamphlets, and publications you should be reading when you're not reading ours. Ladybeard's first issue is all about sex. Not that you needed to be told that. ‘Joy’ Is a Reminder that You Can Be an Entrepreneur without Being a Dick. Hollywood swoons for the male entrepren-asshole. The epic of the coarse young man chomping at the venture capital bit is our generation's bildungsroman of choice. We love our Zuckerbergs and Jobses and Musks, and our films mythologize these men into characters even more irreverent, ruthless, and cruel than their real-life counterparts.

What is it that we love about the entrepren-asshole, this paragon of egomania and excessive bro-courage? Maybe we're drawn to the idea that in order to be truly successful, we'd have to give up on kindness and put generosity on hold, shave off all our human concerns and cut out our close relationships, to focus single-mindedly on the target of wild success. An Interview with Feminist Journal Hysteria. Issue six of HYSTERIA magazine (photo by the author.) HYSTERIA collects feminist voices from a range of demographics the world over.

Through visual art, essays and interviews, their bi-annual magazine asks the important questions surrounding feminism today. Modern Matter. Violet Magazine. Hey friend! Thanks so much for visiting my website and this page, it’s great to have you here in our cosy corner of the web! I’m Alyson Swan the creator, editor and independent publisher of Violet Magazine. I created Violet as the vehicle to connect you (the reader) to the leaders, authors, and luminaries in the female entrepreneur and business worlds. I consider myself privileged to curate stories about amazing, interesting women, their journeys whilst creating a business and beyond. The good, the bad and the ugly. The magazine provides me the opportunity to bring all of these interesting people and those partnerships together. Girls Like Us. Recens Paper.