No Tears Guide to HTML5 Games. Introduction So you want to make a game using Canvas and HTML5? Follow along with this tutorial and you'll be on your way in no time. The tutorial assumes at least an intermediate level of knowledge of JavaScript. You can first play the game or jump directly to the article and view the source code for the game. Creating the canvas In order to draw things, we'll need to create a canvas.

10 cool HTML5 games and how to create your own. Thanks to Apple dropping support for Flash on iOS, HTML5 has gained a lot of traction and is getting very popular. 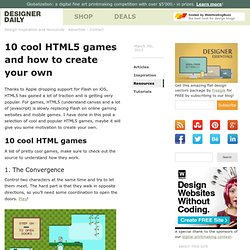 For games, HTML5 (understand canvas and a lot of javascript) is slowly replacing Flash on online gaming websites and mobile games. I have done in this post a selection of cool and popular HTML5 games, maybe it will give you some motivation to create your own. 10 cool HTML games A list of pretty cool games, make sure to check out the source to understand how they work. 1. Control two characters at the same time and try to let them meet. 2. Defend your planet against incoming meteorites. 3. Addicting simple game where you race with a stick figure in levels designed by other users. HTML5 Game Dev Tutorials. iOS 7.1 - minimal-ui is anything but minimal for HTML5 game developers Posted 15:16PM on March 20 2014 by Pascal Rettig This is a guest post from Odobo CTO Peter Mareš. 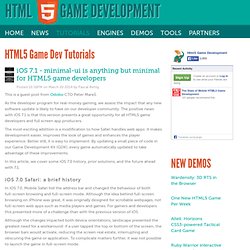 As the developer program for real-money gaming, we assess the impact that any new software update is likely to have on our developer community. The positive news with iOS 7.1 is that this version presents a great opportunity for all HTML5 game developers and full screen app producers. The most exciting addition is a modification to how Safari handles web apps: it makes development easier, improves the look of games and enhances the player experience. In this article, we cover some iOS 7.0 history, prior solutions, and the future ahead with 7.1. iOS 7.0 Safari: a brief history In iOS 7.0, Mobile Safari hid the address bar and changed the behaviour of both full-screen browsing and full-screen mode. iOS 7.0 Safari: a temporary solution. Create a Mobile Educational Game with HTML5. Kids nowadays get bored at school. 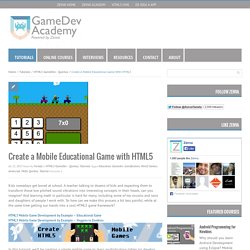 A teacher talking to dozens of kids and expecting them to transform those low pitched sound vibrations into interesting concepts in their heads, can you imagine? And learning math in particular is hard for many, including some of my cousins and sons and daughters of people I work with. So how can we make this process a bit less painful, while at the same time getting our hands into a cool HTML5 game framework? HTML5 Mobile Game Development by Example – Educational GameHTML5 Mobile Game Development by Example – Veggies vs Zombies In this tutorial, we’ll be creating a simple mobile game to learn multiplication tables (or develop other math skills) in the form of a racing game.

We’ll be using the Quintus game development framework on this tutorial. The requirements for this tutorial are the following: Familiarity with HTML, CSS, JavaScript and basic object oriented concepts.Clone or download Quintus from it’s Github page.Setup a local webserver. Tutorial: Simple game with HTML5 Canvas - part 1. Check other language versions: [RUSSIAN] Tutorial: Simple game with HTML5 Canvas Part 1 - Introduction & Background Part 2 - Character & Animation Part 3 - Physics & Controls Part 4 - Platforms & Collisions Part 5 - Scrolling & Game States If you are interested in news and updates of that tutorial just follow me on twitter: [MichalBe's Twitter] Because 10KApart is closed now, and we are all waiting for the results, it is good time to remind my very simple "Stairs to heaven" game and explain in details how it was made. 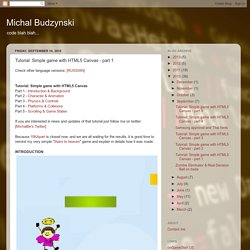 StH is very simple clone of Doodle Jump, but to be honest I was inspired by Icy Tower and discover DJ after I submit StH to the competition. Never mind. Part 1. That's all in HTML we will need during this tutorial. First of all its important to understand one thing about canvas - it is not possible to move objects in the canvas surface. Var clear = function(){ ctx.fillStyle = '#d0e7f9'; //set active color to #d0e...