HTML5 vs flash: the controversy

The Flash vs. HTML5 Endgame. [In the debate of Flash vs HTML5, has the death of Flash been over exaggerated? 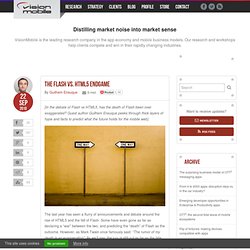 Guest author Guilhem Ensuque peeks through thick layers of hype and facts to predict what the future holds for the mobile web]. The last year has seen a flurry of announcements and debate around the rise of HTML5 and the fall of Flash. Some have even gone as far as declaring a “war” between the two, and predicting the “death” of Flash as the outcome.

However, as Mark Twain once famously said: “The rumor of my death is an exaggeration”. As we’ll see, the jury is still out as far as the fate of Flash and Adobe are concerned. A brief (abridged) history of the web “HTML5” is the new high-tech industry darling, and not just in the mobile space. “HTML5” when used as a shorthand, covers of family of web technologies currently being standardised by the W3C and at various implementation stages by browser vendors. JavaScript, Dynamic HTML and XML HTTP requests (a.k.a.

Apple vs Flash...or vs Google?

Adobe smacks back Apple over iPad, again. There’s a ton of chatter on Techmeme today regarding iPad and Flash and HTML 5. 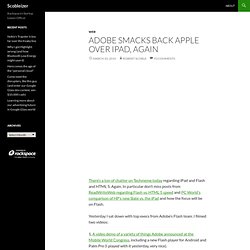 Again. In particular don’t miss posts from ReadWriteWeb regarding Flash vs. HTML 5 speed and PC World’s comparison of HP’s new Slate vs. the iPad and how the focus will be on Flash. Yesterday I sat down with top execs from Adobe’s Flash team. I filmed two videos: 1. Where on the Web Is HTML5? Unless you’ve been off snorkeling in the Alps, you’ve probably heard all the recent hubbub about HTML5 and its ability to replace Flash as the web’s default video player. 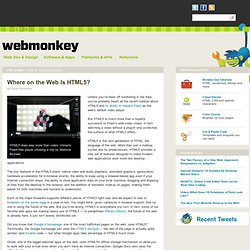 But HTML5 is much more than a hopeful successor to Flash’s web-video crown. In fact, watching a video without a plug-in only scratches the surface of what HTML5 offers. HTML5 is the next generation of HTML, the language of the web. More than just a markup syntax like its predecessors, HTML5 provides a new set of features designed to make modern web applications work more like desktop applications. Each of the major browsers supports different pieces of HTML5 right now, and we expect to see all browsers on the same page in a year or two. Gmail, one of the bigger webmail apps on the web, uses HTML5′s offline storage mechanism to allow you to work with your e-mail even when you don’t have an internet connection. Aside from video, HTML5 is replacing Flash in other ways. Hulu Sticks With Flash, Says HTML5 Is Not Ready Yet. Apple Unveils A New HTML5/Web Standards Showcase — Safari Requir.

Under fire for its App Store not being more open, recently, Apple’s response has been that there is a portion of its devices that is totally open: the web. 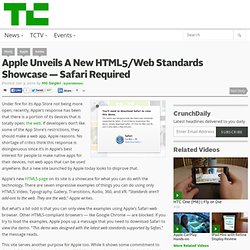 If developers don’t like some of the App Store’s restrictions, they should make a web app, Apple reasons. No shortage of critics think this response is disingenuous since it’s in Apple’s best interest for people to make native apps for their devices, not web apps that can be used anywhere. But a new site launched by Apple today looks to disprove that. Apple’s new HTML5 page on its site is a showcase for what you can do with the technology.

There are seven impressive examples of things you can do using only HTML5: Video, Typography, Gallery, Transitions, Audio, 360, and VR. But what’s a bit odd is that you can only view the examples using Apple’s Safari web browser. This site serves another purpose for Apple too. All of these demos point to a “Safari Demos” page on the Apple Developer site — a page which can’t be found yet. Scribd’s Decision To Dump Flash Pays Off, User Engagement Triple. You could call it the perfect storm. 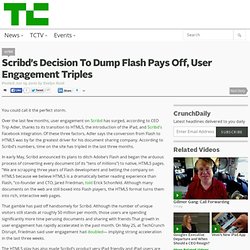 Over the last few months, user engagement on Scribd has surged, according to CEO Trip Adler, thanks to its transition to HTML5, the introduction of the iPad, and Scribd’s Facebook integration. Of these three factors, Adler says the conversion from Flash to HTML5 was by far the greatest driver for his document sharing company. According to Scribd’s numbers, time on the site has tripled in the last three months. In early May, Scribd announced its plans to ditch Adobe’s Flash and began the arduous process of converting every document (of its “tens of millions”) to native, HTML5 pages.

“We are scrapping three years of Flash development and betting the company on HTML5 because we believe HTML5 is a dramatically better reading experience than Flash, “co-founder and CTO, Jared Friedman, told Erick Schonfeld. That gamble has paid off handsomely for Scribd. The HTML5 play has also made Scribd’s product very iPad friendly and iPad users are responding in kind. YouTube: HTML5 Video Is No Match for Flash. YouTube has some bad news for those of you hoping the site would soon ditch Flash in favor of HTML5 video tags: It isn’t going to happen any time soon. 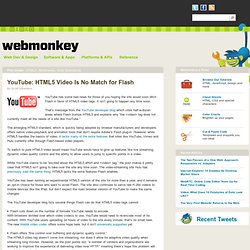 That’s message from the YouTube developer blog which cites half-a-dozen areas where Flash trumps HTML5 and explains why “the <video> tag does not currently meet all the needs of a site like YouTube.” The emerging HTML5 standard, which is quickly being adopted by browser manufacturers and developers, offers native video-playback and animation tools that don’t require Adobe’s Flash plug-in. However, while HTML5 handles the basics of video, it lacks many of the extra features that sites like YouTube, Vimeo and Hulu currently offer through Flash-based video players.

To switch to pure HTML5 video would mean YouTube would have to give up features like live streaming, dynamic video quality control and the ability to allow users to jump to specific points in a video. See Also: