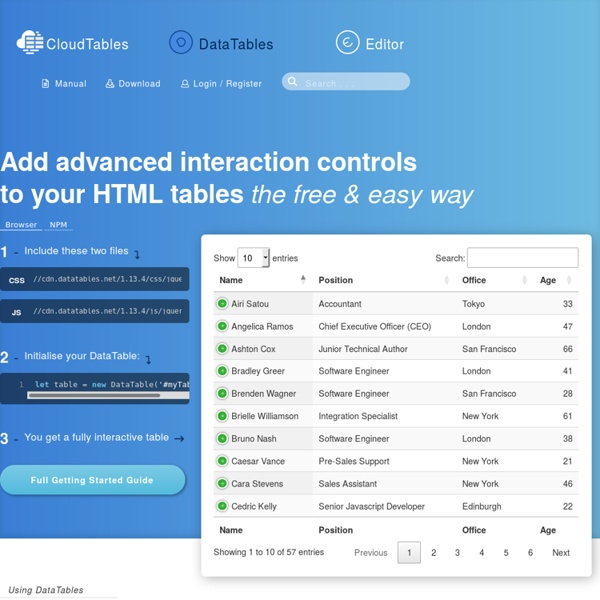 Random Color Why does this ex­ist? There are lots of clever one-lin­ers for gen­er­at­ing ran­dom col­ors: '#' + Math.floor(Math.random()*16777215).toString(16); Un­for­tu­nately, this code nat­u­rally pro­duces murky greys, browns and greens. ran­dom­Color gen­er­ates at­trac­tive col­ors by de­fault. PHP charset/encoding FAQ - Kore Nordmann - PHP / Projects / Politics By Kore Nordmann, first published at Fri, 30 May 2008 09:10:32 +0200 General What is the difference between unicode and UTF-8/UTF-16/...? Unicode is a charset, which means just a set of characters, which says nothing about how the characters are actually stored (mapped to bytes).

Chosen: A jQuery Plugin by Harvest to Tame Unwieldy Select Boxes Chosen is a jQuery plugin that makes long, unwieldy select boxes much more user-friendly. Downloads Project Source Contribute Standard Select Turns This Into This CodeIgniter and form validation+ajax - Web Development Hi, i am using visual studio 2015 and trying to export data which i am importing through excel by the user selected Excel file. Now the importing part has been successfully completed i am using OLEDB Connection but Stuck in exporting the same data to a new Excel file. tried ...

10 Page Loading Effects That Catch Your Viewer's Attention Page loading time depends on several factors. Some of these factors involve either the Internet connection speed, the devices you use or the elements that compose the website people are visiting. Whatever the cause is, it is your job as a web designer to do your best to keep your viewers’ attention. How long users willing to wait for a site to load before they abandon the page sometimes depends on how you can entertain them while they are waiting. Concurrent Versions System - Removing directories In concept, removing directories is somewhat similar to removing files--you want the directory to not exist in your current working directories, but you also want to be able to retrieve old releases in which the directory existed. The way that you remove a directory is to remove all the files in it. You don't remove the directory itself; there is no way to do that. Instead you specify the ‘-P’ option to cvs update or cvs checkout, which will cause CVS to remove empty directories from working directories. (Note that cvs export always removes empty directories.)

Introduction To Polygonal Modeling And Three.js Advertisement When the third dimension is introduced into an entertainment medium, it forever changes the way that medium is presented and consumed. The photorealism of the CGI dinosaurs in Jurassic Park opened the doors for film creators to use computers to create visual environments that never would have been possible otherwise. VeggieTales spawned a new type of cartoon, one that uses 3-D objects instead of drawings and which inspired the creation of everything from Pixar and Dreamworks blockbusters to Saturday morning cartoons. Computer software was greatly affected by this new trend in visual media. 3-D computer games such as Wolfenstein 3D, Quake and Doom reinvented PC gaming, and classic franchises that inspired a generation with their two-dimensional games, such as Super Mario Bros and Zelda, were being updated to 3-D in their subsequent titles. 2Epic Citadel by Mozilla and Epic.

Concurrent Versions System - Adding, removing, and renaming files and directories Go to the first, previous, next, last section, table of contents. In the course of a project, one will often add new files. Likewise with removing or renaming, or with directories. The general concept to keep in mind in all these cases is that instead of making an irreversible change you want CVS to record the fact that a change has taken place, just as with modifying an existing file.