Pages.apigee.com/rs/apigee/images/developers-hate-marketing-ebook-2013-06.pdf. Attracting Developers to Your Platform. 1m1m – One Million by One Million » Incubator-in-a-Box for Platform Vendors. 7 ways a Platform can fuel the App Economy. Earlier this year a Technet sponsored study showed that in February there were roughly 466,000 jobs in the “App Economy” in the United States. 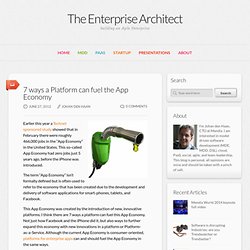 This so-called App Economy had zero jobs just 5 years ago, before the iPhone was introduced. The term “App Economy” isn’t formally defined but is often used to refer to the economy that has been created due to the development and delivery of software applications for smart-phones, tablets, and Facebook. This App Economy was created by the introduction of new, innovative platforms.

I think there are 7 ways a platform can fuel this App Economy. The Application Island: Gaining Mobile Developer Mindshare. The barrier for entry for creating software for computing devices has never been lower. 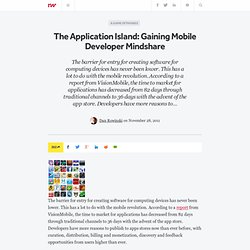 This has a lot to do with the mobile revolution. According to a report from VisionMobile, the time to market for applications has decreased from 82 days through traditional channels to 36 days with the advent of the app store. Developers have more reasons to publish to apps stores now than ever before, with curation, distribution, billing and monetization, discovery and feedback opportunities from users higher than ever. There are several kinds of mobile developers. There are independent software vendors, contractors, hobbyists, moonlighting engineers, entrepreneurs, in-house and B2B/B2C focused developers. Attracting Developer Mindshare According to VisionMobile's findings, iOS has reached the most developers while Android has the most amount of "mindshare" (percentage of developers using the platform).

Network Effects & Application Platforms. Www.deloitte.com/assets/Dcom-UnitedStates/Local Assets/Documents/us_tmt_OpenMobiletheme -Thesurgingappseconomy_062612.pdf. How Can Carriers Attract Developers? - BlogGeek. Considerations in Designing a Developer Platform. The meteoric rise of developer platforms over the last seven years has been impressive to watch and a major boon to the social and mobile ecosystems. 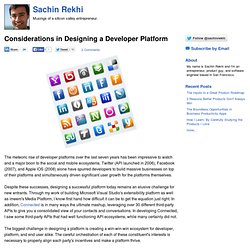 Twitter (API launched in 2006), Facebook (2007), and Apple iOS (2008) alone have spurred developers to build massive businesses on top of their platforms and simultaneously driven significant user growth for the platforms themselves. Despite these successes, designing a successful platform today remains an elusive challenge for new entrants. Through my work of building Microsoft Visual Studio's extensibility platform as well as imeem's Media Platform, I know first hand how difficult it can be to get the equation just right. In addition, Connected is in many ways the ultimate mashup, leveraging over 30 different third-party APIs to give you a consolidated view of your contacts and conversations.

In developing Connected, I saw some third-party APIs that had well functioning API ecosystems, while many certainly did not. Want to Attract Developers to your API? Set Them Free. When it comes to APIs, credibility with developers is critical, whether you are trying to hire them, attract them to your developer network, or get them to build integrations and apps using your API. 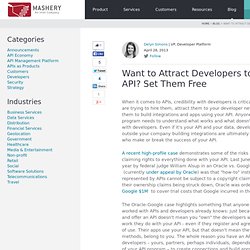 Anyone running an API program needs to understand what works and what doesn't when working with developers. Even if it's your API and your data, developers inside and outside your company building integrations are ultimately the ones who make or break the success of your API. Attracting Developers to Your API. This guest post comes from Alex Willen, Business Analyst at Box.net. 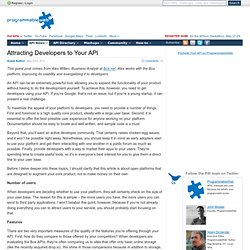 Alex works with the Box platform, improving its usability and evangelizing it to developers. Building a developer ecosystem: What vendors do to attract you to their platforms. September 23, 2013, 11:00 AM — Sometimes the market drives us to choose one platform (a device, operating system, protocol) over another, whatever our personal technical preferences. 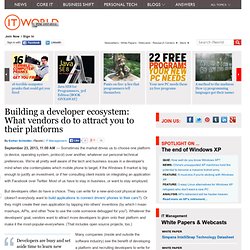 We're all pretty well aware of the tech and business issues in a developer's mind when she contemplates which mobile phone to target, if the Windows 8 market is big enough to justify an investment, or if her consulting client insists on integrating an application with Facebook over Twitter. Most of us have to stay in business, or want to stay employed. But developers often do have a choice. MobileBeat 2014. A Mobile Developer's Outlook on the Mobile Landscape. By Taylor Frey on May 09th, 2013 Technology continues to be a growing, ever-changing, industry. 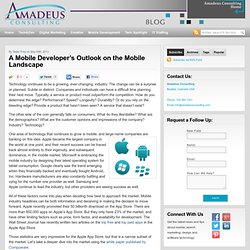 The change can be a surprise or planned. Subtle or distinct. Companies and individuals can have a difficult time planning their next move. Typically, a service or product must outperform the competition. The other side of the coin generally falls on consumers. One area of technology that continues to grow is mobile, and large-name companies are banking on this idea.

The world at one point, and their recent success can be traced back almost entirely to their ingenuity, and subsequent dominance, in the mobile market. All of these factors come into play when deciding how best to approach the market. Those statistics are very impressive for the Apple App Store, but that is a narrow subset of the market. The current market share has Android on over 56% of the devices. The following ‘Key Findings’ are pulled directly from the report: About the Author. A Mobile Developer's Outlook on the Mobile Landscape. The Application Development Landscape - 2011. Developer Ecosystems. Building Developer Ecosystems As millions of consumers demonstrate their increasing thirst for mobile-application-based services, the demand for mobile developers and fresh content is growing. 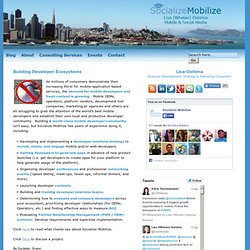 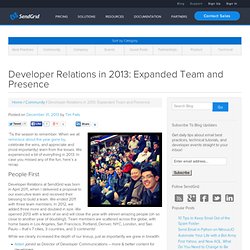 When we all reminisce about the year gone by, celebrate the wins, and appreciate and (most importantly) learn from the losses. We experienced a bit of everything in 2013. In case you missed any of the fun, here’s a recap. Developer Relations Division. To build a strong and loyal local Software ecosystem and developer affinity around Intel platform by delivering a series of value added enabling programs and innovations. 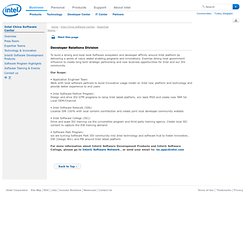 Exercise strong local government influence to create long term strategic partnership and new business opportunities for Intel and our ISV community. Our Scope: Introducing the Rackspace Developer Relations Group and open cloud SDKs. Developer Zone. Tips, tricks and techniques from Salesforce Developers. Women in Tech: From Java to Apex – A Straightforward Curve Swathi Ramini came to the NYC Salesforce1 Tour last month armed with tough questions for the DevZone staff. She had just rolled out a custom mobile app for her team, and wanted to understand the nitty-gritty details about the Salesforce1 Mobile App. She got her answers, and I got her story.