Microsoft India sur Twitter : "Real #developers of India are ones sitting behind laptops- the #coders. They #Empower us towards better solutions. Wes MacDonald sur Twitter : "#windows10 #ch9... Build makes Singapore debut at Resorts World Sentosa. The Microsoft Build developer conference in Singapore last Thursday opened its doors to more than 400 developers from the island state and around the region including Malaysia, Thailand, Indonesia and the Philippines. 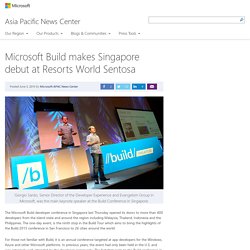 The one-day event, is the ninth stop in the Build Tour which aims to bring the highlights of the Build 2015 conference in San Francisco to 26 cities around the world. For those not familiar with Build, it is an annual conference targeted at app developers for the Windows, Azure and other Microsoft platforms. In previous years, the event had only been held in the U.S. and was extremely well-attended by the developer community. The fact that seats to the Build conference in San Francisco last month sold out within an hour is probably the best testament to the popularity of the event. In her opening address, Jessica Tan, Managing Director of Microsoft Singapore, reiterated the company’s “mission to empower every person and organization on the planet to achieve more.” Microsoft Malaysia sur Twitter : "#Developers, you can now find Apache Cordova samples and tutorials in the GitHub repository:

Blogs. Open source code is the norm for so many developers these days, and unsurprisingly, so is open documentation. 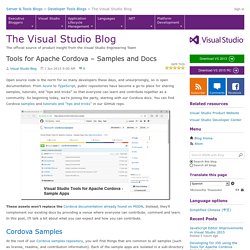 From Azure to TypeScript, public repositories have become a go-to place for sharing samples, tutorials, and “tips and tricks” so that everyone can learn and contribute together as a community. So beginning today, we’re joining the party, starting with our Cordova docs. You can find Cordova samples and tutorials and “tips and tricks” in our GitHub repo. These assets won’t replace the Cordova documentation already found on MSDN.

Instead, they’ll complement our existing docs by providing a venue where everyone can contribute, comment and learn. At the root of our Cordova samples repository, you will find things that are common to all samples (such as license, readme, and contribution information). If you run into any issues with the samples or have suggestions for new ones, please open an issue or better yet, send us a pull request. What's New with ASP.NET 5. New website has 57 resources just for Android developers! HTTP Archive.

WWDC 2014 Session Videos. JavaScript for AutomationSession 306Play Automation in OS X has always been about power and choice. 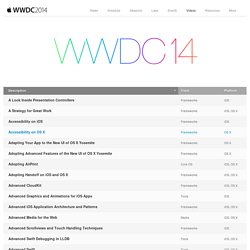 Scriptable applications, including Pages, Keynote, Numbers, and the Finder, can already be automated using a variety of languages, including AppleScript, Objective-C, Perl, Python, and Ruby. With OS X Yosemite, application scripting support has been added to another popular language, JavaScript. JavaScript for Automation (JXA) extends the standard JavaScript environment provided by the JavaScriptCore framework with support for querying and controlling all of the scriptable applications running in OS X. JXA scripts are supported at all layers of the system and can be invoked from the command-line, from the system-wide Script Menu, and can even be distributed as code-signed applications. 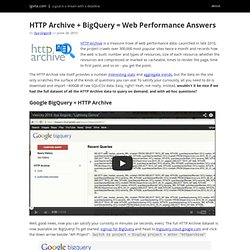 Launched in late 2010, the project crawls over 300,000 most popular sites twice a month and records how the web is built: number and types of resources, size of each resource, whether the resources are compressed or marked as cacheable, times to render the page, time to first paint, and so on - you get the point. The HTTP Archive site itself provides a number interesting stats and aggregate trends, but the data on the site only scratches the surface of the kinds of questions you can ask! To satisfy your curiousity, all you need to do is download and import ~400GB of raw SQL/CSV data. VBA code to set the topmost cell active across all sheets in Excel. To get rid of annoying Excel save of scroll position during save across sheets. 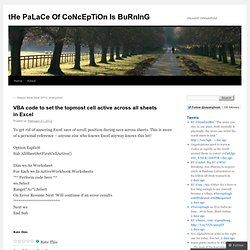 This is more of a personal reference – anyone else who knows Excel anyway knows this bit! Option Explicit Sub AllSheetSetFirstCellActive() Dim ws As Worksheet For Each ws In ActiveWorkbook.Worksheets ‘** Perform code here ** ws.Select Range(“A1″).Select On Error Resume Next ‘Will continue if an error results ‘*********************** Next ws End Sub Like this: Like Loading...

Articles/nosql-intro.pdf. .NET. Social. Thinking of U and I.