Bartaz/impress.js. Prezi.com, prezi. Ivan Golod on Prezi. Piccolo Home Page. Research.microsoft.com/en-us/um/people/karlson/fc.pdf. How to Zoom and Pan with SVG. This topic shows you how to use Scalable Vector Graphics (SVG) to zoom and pan, and ends with an example of a complex organizational chart that can be zoomed and panned. 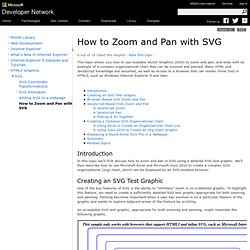 Basic HTML and JavaScript knowledge are assumed, as well as access to a browser that can render inline SVG in HTML5, such as Windows Internet Explorer 9 and later. Introduction In this topic we’ll first discuss how to zoom and pan in SVG using a detailed SVG test graphic. We’ll then describe how to use Microsoft Excel and Microsoft Visio 2010 to create a complex SVG organizational (org) chart, which can be displayed by an SVG-enabled browser.

Creating an SVG Test Graphic One of the key features of SVG is the ability to "infinitely" zoom in on a detailed graphic. An acceptable SVG test graphic, appropriate for both zooming and panning, might resemble the following graphic. This graphic was created using the following example: HTML5 Inline SVG Test Graphic. <! Transform="translate( -400*(0.9-1), -300*(0.9-1) ) scale(0.9)" <! Tropes: Text Analysis and Semantics. Analysis of written or spoken texts requires that certain questions should be asked with regard to certain objectives. 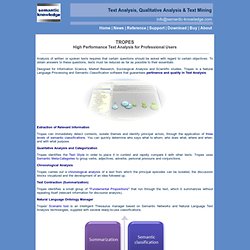 To obtain answers to these questions, texts must be reduced as far as possible to their essentials. Designed for Information Science, Market Research, Sociological Analysis and Scientific studies, Tropes is a Natural Language Processing and Semantic Classification software that guarantees pertinence and quality in Text Analysis. Extraction of Relevant Information Tropes can immediately detect contexts, isolate themes and identify principal actors, through the application of three levels of semantic classifications. You can quickly determine who says what to whom; who does what, where and when; and with what purpose. Qualitative Analysis and Categorization Tropes identifies the Text Style in order to place it in context and rapidly compare it with other texts. Chronological Analysis Text Contraction (Summarization) Natural Language Ontology Manager Hypertext Navigation. 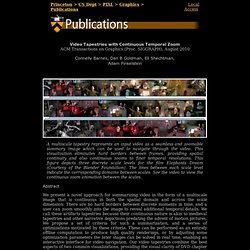 SIGGRAPH), August 2010 A multiscale tapestry represents an input video as a seamless and zoomable summary image which can be used to navigate through the video. This visualization eliminates hard borders between frames, providing spatial continuity and also continuous zooms to finer temporal resolutions. This figure depicts three discrete scale levels for the film Elephants Dream (Courtesy of the Blender Foundation).

The lines between each scale level indicate the corresponding domains between scales. We present a novel approach for summarizing video in the form of a multiscale image that is continuous in both the spatial domain and across the scale dimension: There are no hard borders between discrete moments in time, and a user can zoom smoothly into the image to reveal additional temporal details. Piccolo Home Page. How many versions of Piccolo are there? 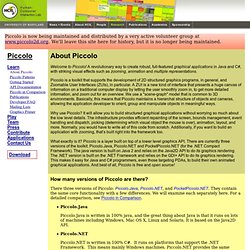 There three versions of Piccolo: Piccolo.Java, Piccolo.NET, and PocketPiccolo.NET. They contain the same core functionality with a few differences. We will examine each separately here. For a detailed comparison, see Piccolo in Comparison. Piccolo.JavaPiccolo.Java is written in 100% java, and the great thing about Java is that it runs on lots of machines including Windows, Mac OS X, Linux and Solaris. Ahead. Zooming user interface. Example of a ZUI When the level of detail present in the resized object is changed to fit the relevant information into the current size, instead of being a proportional view of the whole object, it's called semantic zooming.[1] Some experts consider the ZUI paradigm as a flexible and realistic successor to the traditional windowing GUI, being a Post-WIMP interface. But little effort is currently spent developing ZUIs, while there are ongoing efforts for developing other types of GUIs.