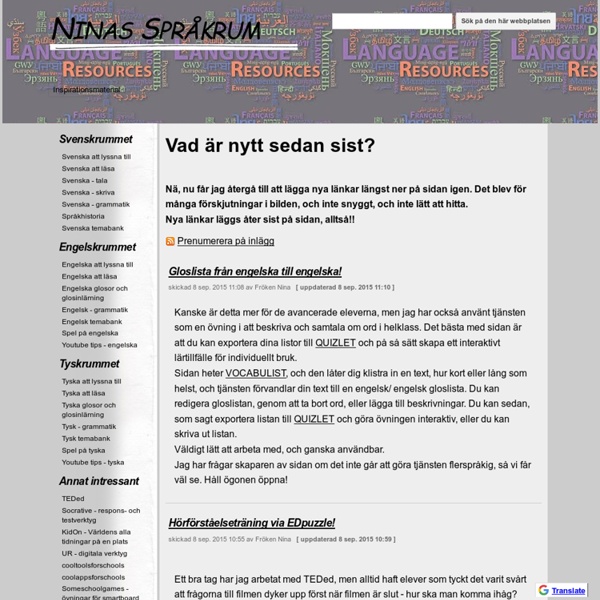 Tired of Teaching “Elements of Plot”? A New, Fun Approach! Are you tired of beginning each school year with the same ol’ “Elements of Plot” lesson? The initial vocabulary and concepts related to “Plot” can be kind of “dry” and “boring”, especially if you’re a student in grades 7th-10th! You know what I’m talking about because we’ve all been there ;) I took some time (well, quite a bit of time!) designing a new way to introduce the “elements of plot” to my ninth grade English students! Why some people find learning a language harder than others Scientists at McGill University in Canada found that if left anterior operculum and the left superior temporal gyrus communicate more with each other at rest, then language learning is easier. "These findings have implications for predicting language learning success and failure," said study author Dr Xiaoqian Chai. For the study, researchers scanned the brains of 15 adult English speakers who were about to begin an intensive 12-week French course, and then tested their language abilities both before and after the course. Participants with stronger connections between the left left anterior operculum and an important region of the brain's language network called the left superior temporal gyrus showed greater improvement in the speaking test. However, that doesn't mean success at a second language is entirely predetermined by the brain's wiring.

10 Great Web Tools for Creating Digital Quizzes June 20, 2016 Over the last couple of years, we have reviewed a wide variety of educational web tools to use to create digitally based quizzes. Below is a collection of some of the most popular quizzing tools we have covered so far. Be it a flipped, blended, virtual or even traditional classroom, the tools below will enable you to easily create interactive quizzes, questionnaires and polls to share with students in class.

Grimm Grammar : characters : Die Einwohner in Schloßallee 18 Die Einwohner in Schloßallee 18 Pack your cognitive bags and take a trip to Schloßallee 18, the magnificently restored medieval castle where thirty-six Grimm Brothers fairy tale characters leave behind their 19th century urges and try to cope with the complex demands of the 21st century. Meet the residents of Schloßallee 18! Der Keller In the dungeon lives tortured East German underground poet Hanno, who was imprisoned before system change ... and then, forgotten. Lesson plans UK This is little village of Cholsey, England Sam is 16 years old and lives in, Cholsey, a small English village together with about 3300 inhabitants. The village is old and consists of many old cottages as well as new houses. In the middle of the village there is the church where the people meet on Sundays to attend morning service. A couple of years ago Sam’s parents divorced and her mother moved to London but Sam decided to stay in the village with her father Lucas who is a sheep farmer.

ESL worksheet - Crime vocabulary - advanced Advanced B2-C1 Groups of 2-4 Worksheet description Six-page set of worksheets for 16 upper-intermediate / advanced level crime words:arson, child abuse, drunk driving, drug trafficking, embezzlement, manslaughter, money laundering, perjury, phishing, pickpocketing, piracy, libel, stalking, treason, trespassing, vandalism plus corresponding verbs and nouns for people. Instructions Learn German online. With our podcast, learning German is easy. Learn German with GermanPod101! No more dry, out of date textbook story lines! Here at GermanPod101, you'll learn German with fun, interesting and culturally relevant lessons that are easy to listen to. But not only are they fun - they're effective too! Join the hundreds of thousands of people already learning German through the power of our mobile apps, desktop software and website with free German lessons released every week! "These podcasts offer a painless and FREE way to bone up on the language and culture in a relevant, real world way that you won't get in a class room or on a CDROM."

How Technology Should Have Already Changed Your Teaching How Technology Should Have Already Changed Your Teaching by Terry Heick Ed note: this post has been updated from a fall 2015 post A little bit of technology doesn’t change much. It can make things a little easier by automating them. It could make a lesson here or there gee-wiz flashy, or even engage hesitant students. Educational Technology and Mobile Learning: Grammarly- A Great Tool to Help Students with Their Writing February 9, 2016 Grammarly is an excellent Chrome extension students can use to help them with their writing. It provides a free spell and grammar checker that can be used across different platforms including sites such as Facebook, Twitter, LinedIn, Gmail…etc. It’s true, most of online editors now come with sophisticated spell checking services but only few provide contextual spell and grammar checking.

Free ESL worksheets, ESL printables, English grammar handouts, free printable tests Welcome to our downloadable ESL worksheets section. Whether you're an ESL student looking to practice English, or an ESL teacher looking for printables/ handouts for the classroom, check out our list of topics below. The topics covered include verb tenses, phrasal verbs, articles, prepositions, pronouns, countable and non-countable nouns, and many others. Click if you want to save time by downloading an exercise package in one zip file:

9 Cool German Grammar Lessons Learned from Listening to Chima It’s pretty much impossible to go one day without hearing music. It’s everywhere: playing in shops, blasting out as someone’s ringtone or booming from a tricked-out car. It gets us psyched for adrenaline-filled action scenes in movies, and it melts our hearts as our favorite television characters confess their undying love for one another. But what if you could use music to help you learn German? Listening to music is great for your language skills: it helps with pronunciation, vocab, idioms and overall fluency. You know how you’ve had the chorus of “Let it Go” stuck in your head for weeks?