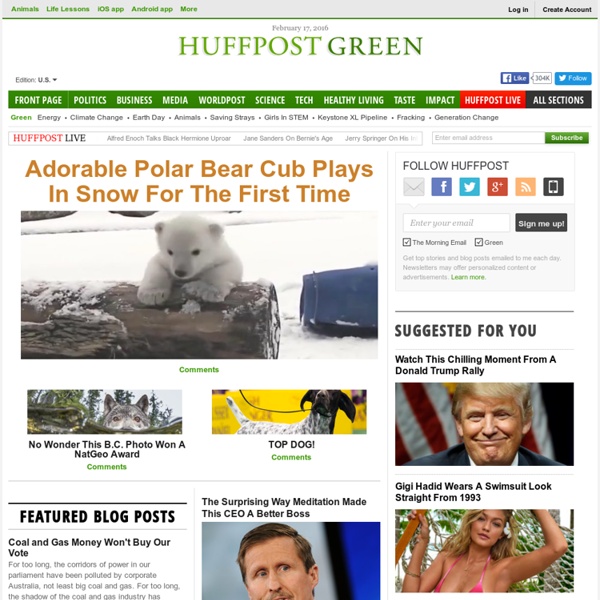 The company whose negligence was responsible for the worst marine oil-spill in history won 43 new leases in the Gulf, which is still fouled by million of gallons of unrecovered crude. Hate mail, harassment campaigns, accusations of scientific fraud and threats of lawsuits have become the new normal for climate scientists and researchers who study climate change denial. These problematic conditions have a chilling effect on scientific research. Elaine McKewon Research Associate at the Australian Centre for Independent Journalism, University of Technology Sydney The next generation of inventors, policymakers, and CEOs will determine the fate of the environment and our economy.

Tar Sands Resistance Escalates in Massachusetts "Funeral for our Future" coffin positioned into place while clergy members speak out about the toxicity of the Keystone XL pipeline. (Photo: Chris Longenecker)The national week of actions against the Keystone XL pipeline called for by the nonviolent direct action group Tar Sands Blockade is supposed to run from March 16-23. Activists in Massachusetts decided they wanted to turn up the heat a little early. On Monday, March 11, 2013, at about 10:30 AM, over 100 protesters stormed the Massachusetts offices of TransCanada, the company that stands to profit most from the pipeline's construction. After two hours, 26 people were arrested for handcuffing their bodies together, blockading the entrance and refusing to leave until the pipeline project was abandoned.

Britain's First Solar Powered Town? Inspiring Story Continues (Video) Image credit: Solarcentury When I wrote about an entire town's plan to go solar, and its incredibly ambitious short-term goal of generating 30% of its electricity from renewables by 2015, the response was enthusiastic. But what's so special about Wadebridge? How are they going about making this happen? How can other communties follow suit? A series of short videos aims to answer these questions and more.

Investors bet on bad weather IBM’s new ad campaign features a jumble of corporate jargon—there are boasts of “a cloud platform built enterprise-strong” — next to a multiethnic array of models, each meant to represent a particular profession. A banker tops the page. Next to his face, it reads, “I can turn weather and tweets into high-yield returns.” IBM computers can sort through data — from tweets to temperature readings — to help investors make decisions.

WCCD — World Council on City Data Indicators for City Services and Quality of Life, the first international standard on city data, was published in May 2014 by the International Organization for Standardization (ISO). This new international standard was developed using the framework of the Global City Indicators Facility that has been extensively tested by more than 250 cities worldwide. This is a demand-led standard, driven and created by cities, for cities. ISO 37120 defines and establishes definitions and methodologies for a set of indicators to steer and measure the performance of city services and quality of life. The standard includes a comprehensive set of 100 indicators — of which 46 are core — that measures a city's social, economic, and environmental performance. The indicators are categorized under 17 themes on city services and quality of life

a global map of wind, weather, and ocean conditions Date | 2014-01-30 01:00 Local ⇄ UTC Data | Wind @ 10hPa Scale | Source | GFS / NCEP / US National Weather Service Climate Reanalyzer The weather maps shown here are generated from the NCEP Global Forecast System (GFS) model. GFS is the primary operational model framework underlying U.S. NOAA/NWS weather forecasting. Street Charge solar charging stations for smartphones make New York debut Telecomms provider AT&T has partnered with portable solar power systems developer Goal Zero and Brooklyn design studio Pensa for the roll out of Street Charge public solar charging stations in New York. Each station is topped by PV panels that charge up a powerful internal battery to provide smartphone and tablet users with a free juice up. The first units debuted at Riverside Park, Brooklyn Bridge Park, Fort Greene Park and Governor's Island on June 18, and will be followed by another 20 or so stations in the coming months. The original Street Charge station concepts were designed in early 2012 by Pensa as, according to the group's Marco Perry, "an elegant all-in-one community solution for solar charging of mobile devices." Development sketches then became working prototypes. One sported an LED street lamp with a PV panel on top, and another was created in collaboration with the Dumbo Business Improvement District with solar panels above sun umbrellas for use in a cafe setting.

Temperature and humidity based projections of a rapid rise in global heat stress exposure during the 21st century The beginning of the 21st century has seen a variety of extreme heat impacts, from the 2003 European heat wave which was responsible for tens of thousands of additional deaths [1] to the 2010 Russian heat wave which was responsible for a rise in global food prices [2, 3]. More recently, extreme temperatures occurred in Australia in 2012 and 2013, the US Southwest in 2013, in India, Pakistan, and other parts of the Middle East in 2015 and 2016 [4, 5], and again in central Europe in the summer of 2017. Recent attribution studies have suggested that such extreme heat events have already been made more likely due to anthropogenic warming [6–9]. Furthermore, a large body of research now supports the expectation that as the climate continues to warm during the 21st century, the frequency, magnitude, and duration of extreme heat events will increase, as will population exposure to them [10–12].