What is fracking and why is it controversial? 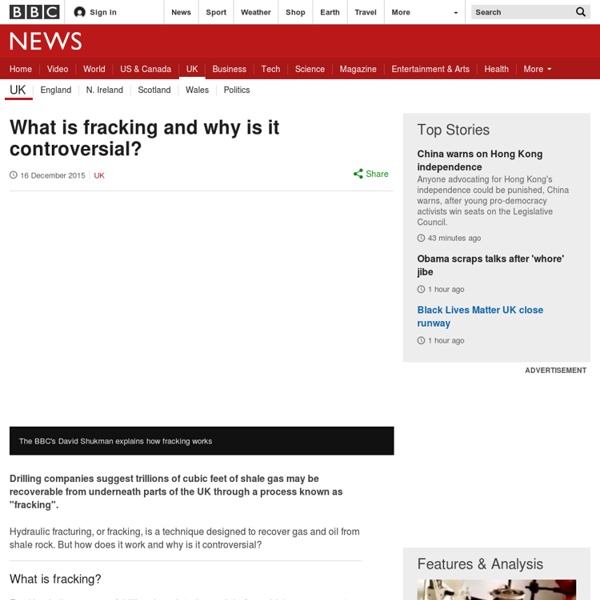 Drilling companies suggest trillions of cubic feet of shale gas may be recoverable from underneath parts of the UK through a process known as "fracking". Hydraulic fracturing, or fracking, is a technique designed to recover gas and oil from shale rock. But how does it work and why is it controversial? What is fracking? Fracking is the process of drilling down into the earth before a high-pressure water mixture is directed at the rock to release the gas inside. Water, sand and chemicals are injected into the rock at high pressure which allows the gas to flow out to the head of the well. The process can be carried out vertically or, more commonly, by drilling horizontally to the rock layer and can create new pathways to release gas or can be used to extend existing channels. The term fracking refers to how the rock is fractured apart by the high pressure mixture. Is fracking taking place in the UK? No. Applications have also been submitted in Yorkshire and Nottinghamshire. Image copyright Reuters Related:  Fracking

Hydraulic fracturing The first experimental use of hydraulic fracturing was in 1947, and the first commercially successful applications were in 1949. As of 2012, 2.5 million hydraulic fracturing jobs have been performed on oil and gas wells worldwide, more than one million of them in the United States.[4][5] Frac job in progress Geology[edit] Mechanics[edit] Fracturing in rocks at depth tends to be suppressed by the confining pressure, due to the immense load caused by the overlying rock strata and the cementation of the formation. Veins[edit] Dikes[edit] Low-level minor intrusions such as dikes propagate through the crust in the form of fluid-filled cracks, although in this case the fluid is magma. Non-hydraulic fracturing[edit] Fracturing as a method to stimulate shallow, hard rock oil wells dates back to the 1860s. Hydraulic fracturing in oil and gas wells[edit] The relationship between well performance and treatment pressures was studied by Floyd Farris of Stanolind Oil and Gas Corporation. Uses[edit]

Fracking's Latest Scandal? Earthquake Swarms At exactly 10:53 p.m. on Saturday, November 5, 2011, Joe and Mary Reneau were in the bedroom of their whitewashed and brick-trimmed home, a two-story rambler Mary's dad custom-built 43 years ago. Their property encompasses 440 acres of rolling grasslands in Prague, Oklahoma (population 2,400), located 50 miles east of Oklahoma City. When I arrive at their ranch almost a year later on a bright fall morning, Joe is wearing a short-sleeve shirt and jeans held up by navy blue suspenders, and is wedged into a metal chair on his front stoop sipping black coffee from a heavy mug. His German shepherd, Shotzie, is curled at his feet. Joe greets me with a crushing handshake—he is 200 pounds, silver-haired and 6 feet tall, with thick forearms and meaty hands—and invites me inside. On that night in November, just as he and Mary were about to slip into bed, there was "a horrendous bang, like an airliner crashing in our backyard," Joe recalls. Joe and Mary Reneau Photographs by Ben Sklar

4 Scary New Finds About Fracking This Week Photo Credit: Shutterstock.com/Steve Collender December 6, 2012 | Like this article? Join our email list: Stay up to date with the latest headlines via email. This article was published in partnership with GlobalPossibilities.org. Faculty and staff at the Community College of Philadelphia want their institution to “severe all ties to the Marcellus Shale Coalition and the gas fracking industry.” The pushback is a welcome development because it’s not often that fracking is followed by much good news. 1. By now you likely know that most states (and the federal government) don’t require companies that frack oil and gas wells to disclose the multitude of chemicals in the toxic slurry that gets pumped underground. The problem? Few people outside Nabors, the largest onshore drilling contractor by revenue, know exactly what’s in that blend. 2. “Williams said when he looked up to see what the commotion was, the truck's rear end was in the air,” the Intelligencer/Wheeling News-Register reported.

CONFIRMED - Link Between Fracking and Earthquakes By. John C.K. Daly of Oilprice.com On 5 November 2011 an earthquake measuring 5.6 rattled Oklahoma and was felt as far away as Illinois. Until two years ago Oklahoma typically had about 50 earthquakes a year, but in 2010, 1,047 quakes shook the state. Why? In Lincoln County, where most of this past weekend’s seismic incidents were centered, there are 181 injection wells, according to Matt Skinner, an official from the Oklahoma Corporation Commission, the agency which oversees oil and gas production in the state. Cause and effect? The practice of injecting water into deep rock formations causes earthquakes, both the U.S. The U.S. natural gas industry pumps a mixture of water and assorted chemicals deep underground to shatter sediment layers containing natural gas, a process called hydraulic fracturing, known more informally as “fracking.” According to the U.S. Why was the process halted? According to the USGS website, under the undated heading, “Can we cause earthquakes?

Shale gas by country - Wikipedia Shale gas is natural gas produced from shale, a type of sedimentary rock. Shale gas has become an increasingly important source of natural gas in the United States over the past decade, and interest has spread to potential gas shales in Canada, Europe, Asia, and Australia. One analyst expects shale gas to supply as much as half the natural gas production in North America by 2020.[1] In a 2013 report, the US Energy Information Administration estimated the quantity of technically recoverable shale gas for 41 countries.[2][3] North America leads the worldwide production of shale gas, with the US and Canada having significant levels.[4] Beyond the US and Canada, shale gas is so far produced at a commercial scale only in Argentina and China. While the shale gas potential of many nations seems promising, there are several obstacles spanning several economic, environmental, technical and social issues grouped in major categories such as access to resources, infrastructure and governance.[5]