How to Map the New Economy in Your City 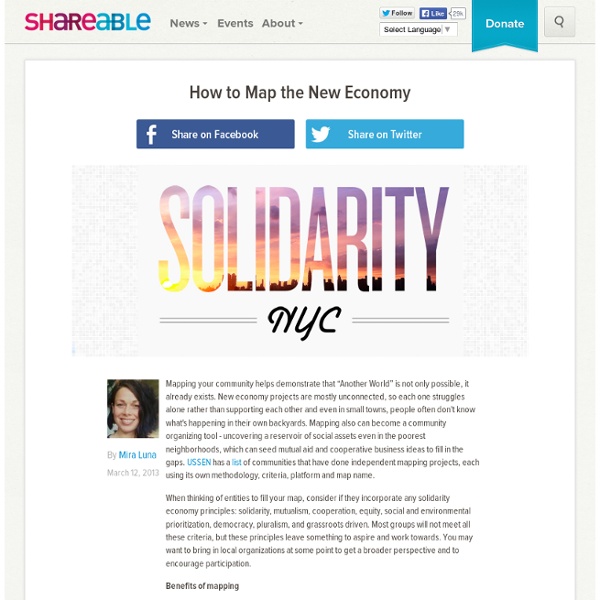 Mapping your community helps demonstrate that “Another World” is not only possible, it already exists. New economy projects are mostly unconnected, so each one struggles alone rather than supporting each other and even in small towns, people often don't know what's happening in their own backyards. Mapping also can become a community organizing tool - uncovering a reservoir of social assets even in the poorest neighborhoods, which can seed mutual aid and cooperative business ideas to fill in the gaps. USSEN has a list of communities that have done independent mapping projects, each using its own methodology, criteria, platform and map name. When thinking of entities to fill your map, consider if they incorporate any solidarity economy principles: solidarity, mutualism, cooperation, equity, social and environmental prioritization, democracy, pluralism, and grassroots driven. Benefits of mapping Make projects more visible to each other and the public -- free advertising! How to Make a Map

Climate After Growth In this provocative paper, PCI Executive Director Asher Miller and Transition Movement Founder (and PCI Fellow) Rob Hopkins make a convincing case for why the environmental community must embrace post-growth economics and community resilience in their efforts to address the climate crisis. executive summary | download (9MB) The nearly ubiquitous belief of our elected officials is that addressing the climate crisis must come second to ensuring economic growth. This is wrongheaded—both because it underestimates the severity of the climate crisis, and because it presupposes that the old economic "normal" of robust growth can be revived. It can’t. In fact, we have entered an era of “new normals”—not only in our economy, but in our energy and climate systems, as well. The New Energy Normal. These fundamental changes in our energy, climate, and economic systems require unprecedented (and previously politically untenable) strategies.

Why Use it? Community mapping provides equitable development practitioners with accurate and unique information, effective visual tools, and the ability to understand and share their own experience in the context of their changing environment. Community mapping is powerful because of its capacity to democratize information-both what is recorded and who has access to it. When presented well, maps have the power to convey complicated information and relationships in a straightforward, accessible manner, enabling non-experts to participate meaningfully in community planning and advocacy. Seeing the Connections By looking at the map we created, people hot a sense why certain areas weer targeted to build housing, playgrounds, community gardens. This section contains over 20 examples of successful mapping projects, most with sample maps, to illustrate how communities use mapping to support equitable development. Quick Reference Guide: Community Mapping Examples Targeting resources for maximum impact .

Solar and Wind Power Now Cheaper Than Coal Power in the U.S It’s cheaper to use solar and wind power in the USA, than traditional coal power. Good news for solar and wind power companies, and a vindication for clean energy activists and lobbies. It might mean more jobs in the energy sector if production of solar and wind power systems increase, and more electricity generating stations are built. However there is a catch, it’s also reported that natural gas (a fossil fuel) is a possible replacement for traditional coal power plants, meaning we’re still not quite off of fossil fuels, but this is still a step in the right direction. There’s a big issue looming here just under the surface, and that is, if natural gas is chosen, and the CO2 from burning the fuel is not released into the atmosphere, then where does it go? What is Carbon Capture and Storage? Yes, that’s right. Wikipedia explains Carbon Capture and Storage like this: Is There Risk of Leakage? Sure… But it’s a small risk. So What Can We Do With The CO2? And that is a good thing.

Social Compact CityDNA Data Mapping Tool Advances in web technologies and user interface design have provided Social Compact with the opportunity to dramatically increase the value and reach of their research by placing it more directly in front of a contingency of stakeholders with diverse needs. Social Compact is developing one of the most innovative web-based GIS and information platforms in the country, CityDNA. By providing intuitive and easily accessible analytical and visualization tools based on accurate and timely data, Social Compact can break down information barriers to facilitate coordinated and effective decision making among investors, government and communities. With CityDNA Data Mapping Tool you can: ü Synthesize multidisciplinary information into meaningful data to be used by investors for evidence-based decision making. ü Use this interactive web-based software to determine how to best invest in profitable, underserved communities Track the trade area Accurate population data

TED: A Choice Point Originally, the thesis of this essay was going to be that TED, contrary to its reputation for promoting innovative ideas, excludes ideas that are truly radical or disruptive, contributing instead to a slickly packaged narrative of “Gee whiz, thanks to these nifty ideas, the world is getting better all the time.” TED is, I thought, a conservative institution, a champion of our culture’s dominant narratives. It isn’t hard to make that case, but when I cast my net a little wider and crowd-sourced some research, I discovered the situation is not quite so simple. The two recent incidents that motivated my original thesis were (1) The suppression of TEDx talks by Rupert Sheldrake and Graham Hancock, and (2) The withdrawal of TED support from TEDxWestHollywood (now proceeding this weekend as ExTEDxWestHollywood (free livestream here). In both cases, the rationale that TED eventually settled on was that the speakers and events were “far removed from mainstream scientific thinking.”

Social Media Mapping: Tools for a Social Audit Earth, 2100 AD: Four futures of environment and society - environment - 03 October 2013 Climate models and the latest IPCC data reveal four possible futures for global population, economy and environment at the end of this century YOU may have heard last week that Earth in 2100 is likely to be between 0.3 and 4.8 °C warmer than it was in the late 20th century. This is one of the key messages of the latest UN Intergovernmental Panel on Climate Change report. Read more: "IPCC 2013: The latest state of the climate report" Those choices will determine whether Earth stays much the same as it is today, or if rising seas eat up major land masses – Florida, Bangladesh, we're looking at you – and large parts of the world become too dry to live in (see diagram). Climate scientists combine the various options into descriptions of how human society might evolve, and plug them into their models to see what each scenario would mean for the climate. It is important to stress that these are just four of the many possible scenarios and ways to cut emissions. 1: Geoengineered safety